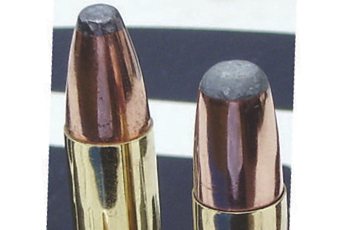 Arms manufacturers, ammunition companies and wildcatters all seek to design the ‘perfect’ round for a particular application. The legacy is to see their name associated with the final product - Ruger, Norma, and Steve Herrett amongst the many. However, it was the initial manufacturer of this month’s cartridge, rather than the true wildcat developer, who got all the credit. Behind the .357 Remington Maximum, originally named the .357 SuperMag, we find Elgin Gates.

ALL ABOUT METAL BASHING!

Gates was instrumental in the development of IHMSA shooting in the USA. (International Handgun Metallic Silhouette Association). He experimented with a raft of “SuperMag” designs, taking .357, .375, .44 and .45 cartridges and creating ‘stretched’ models. The SuperMag version of the .357 Magnum cartridge was intended specifically for IHMSA use. He needed a high energy, flat shooting, parallel wall cartridge that had enough grunt to drop a steel ram at 200 yards and could be chambered in a revolver. His initial 1981 design employed stiff jacketed .35 cal rifle bullets built on a longer (1.610”) but otherwise unmodified .357 Mag case.

The final 1982 Remington/Ruger co-development saw the SuperMag morph into the Maximum cartridge, loosing 0.005” in case length, coupled with the appearance of the ill-fated Ruger Super Blackhawk Maximum revolver. Early Remington brass had the same web thickness as standard .357 Magnum; however it was soon evident that case separation was an issue. They soon introduced a beefed up version with slightly reduced capacity. The Winchester offering, as well as that from Federal, remained unmodified and was soon dropped. The Federal IHMSA headstamp version was nickelled, hiding early signs of impending failure - as I know to my cost.

A GUN TOO FAR!

Despite the heavy bullet construction of the Remington cartridge and the performance objectives of the designer, many firearm guru’s in America simply experimented with light thin wall jacketed pistol bullets in an effort to claim the highest velocity. The results should have been obvious, shooting the cores out of the jackets, extreme forcing cone erosion and initial heavy gas cutting of the top strap – a process that soon stopped as the metal became flame hardened.

The late Bob Milek was the executioner of the Ruger Maximum, telling Bill Ruger that his Blackhawk Maximum was a “gun too far”. Less than 1000 were sold. It could have been the end of the cartridge as well but for the imagination of Dan Wesson, Thompson Center Contender, Freedom Arms, Bond Arms and other gun makers. Dan Wesson truly understood the Gates concept and offered their SuperMag with a longer cylinder that was capable of housing cartridges built around most of the suitable .35 calibre rifle bullets.

Whilst Remington have dropped production of their 158gn HP Maximum ammo they still make the odd batch of brass for use by loyal followers of this supremely accurate long range revolver cartridge. Accurate? Well, my 10-shot, 8” group at 300 yards from an iron sight Dan Wesson set an unbroken record in ILRPSA Revolver A and it still kicks a**e in IHMSA stock revolver comps. Sensible bench loaders use Redding .357 Comp dies, although almost any .38/.357 die sets can be used… providing the sizer die will permit full length travel. Revolver/pistol bullets really insult the ballistic potential of this cartridge, the best projectiles (where permitted) being the .35 cal 180gn SP Speer and 200gn SP Sierra seated slightly deeper than the cannelure to a COL of 2.123”. Loading density of 1 is achieved with 21.7 and 18.4 grains of IMR4227 respectively. The 180gn records a speed. of around 1580 fps. A twist of 1:14 helps generate this impressive performance. Despite the efforts of the American shooting press this continues to be a truly great cartridge