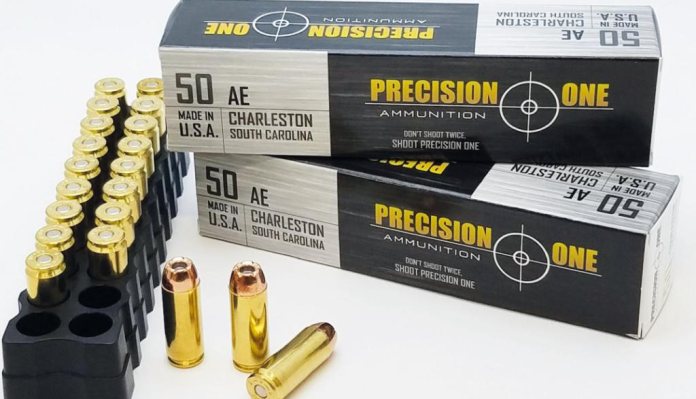 Those of us who remember the halcyon days of proper handgun ownership will recall pistol brands such as Arcadia Machine & Tool (AMT to most of us) and Magnum Research Inc. Whilst their inventories covered the usual spectrum of calibres, they were perhaps better known for their monster products, the stars of many action films of the day. The first to chamber our subject was the gas-operated Israel Military Industry (IMI) Desert Eagle Mk VII, imported into the USA and distributed by Magnum Research. Hard on its heels was the heavily compensated (but still brutal) AMT Automag V. An upgraded version, the Mk XIX following a year or so later. Completing the suite of mega-chamberings, was the 1911-based L.A.R. Mfg. Inc., Grizzly. Whilst Smith & Wesson had other ideas about a 50 cal revolver, Freedom Arms added a .50 AE wheelgun to their list of heavyweights.

Too big for America

And the calibre? The outrageous 1988 Evan Whildin .50 Action Express (.50 A.E.). His design concept was based around the dimensions of the .44 Remington Magnum cartridge, already a chambering in the Desert Eagle. It was intended as a demolition cartridge for use in this ‘military’ side-arm. His design concept retained the rim diameter, case length and overall length of the .44, resulting in a rebated rim construction that only required a barrel change to convert to the calibre. Essentially, this style shows a rimless head as you would find on a 9mm or 308 etc. but this section being of lesser diameter than the main case body.

The first version of the cartridge had a parallel wall case housing a stock ‘fifty cal’ .510” dia. bullet. The resulting chambering in concert with a polygonal bore had a land to land dimension that exceeded the BATF rules for the bore of ‘Sporting Devices’, thereby rendering the arm subject to Class 3, Destructive Device classification. (I quote from John Taffin and Cartridges of The World). Whildin’s revised design resulted in a subtle taper to the case wall (probably enhancing the feeding qualities of this troublesome combination), and the fitting of a 325-grain JHP .500” pill. Who says that ‘anything goes’ in America?

Performance from the factory load was significant, generating 1400 fps and 1400 ft/lbs. Later recipes based upon 300-grain bullets at over 1550 fps further increased the shooter discomfort as well as the muzzle energy. Factory ammo currently ranges from 300-grain JHP to 380-grain Hard Cast Flat Nose. Hand loaders are adequately served with Starline brass, a modest choice of factory bullets, dies from RCBS, Hornady and Lee, data in most current manuals and a wide choice of suitable powders. Despite the ‘jacketed bullet only’ warning on the Desert Eagle, lead lovers can source moulds for both plain and gas check designs in a range of weights from Accurate Molds in Salt Lake City.

With just a few customised rifles, including a batch of No.4s chambered for the calibre, we’re left with the limits of handgun ownership imposed by Section 7. Collecting pistols with uniquely designed operating systems might get you a gas operated Desert Eagle but the AMT, L.A.R. and Freedom Arms products might be harder to justify.