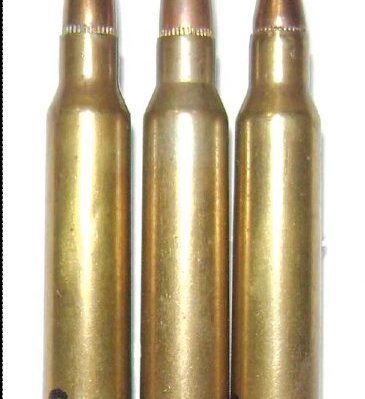 The decision to replace the .30-06 Springfield (7.62 x 63) as the U.S. Standard service cartridge created a long running ballistics debate. Ever since WWII the leading big bore and small bore protagonists had been spoiling for a fight. The arguments boiled down to a competition between the (then) newest .30 and .22 cal centrefire designs. The adoption, in 1954 of the 7.62 x 51 as the new service round did little to silence the small calibre advocates. The US forces started the Vietnam War with the 7.62 in the M14 rifle, both being reasonably traditional design, but all that was about to change!

Work therefore focused on a small cal cartridge and rifle that would meet the needs of the U.S. Military and NATO. In the late 1950’s the Armalite AR15 became the centre of a number of U.S. Army Infantry Board (USAIB) trials to establish a small calibre option for the U.S. Military. Base cartridge was the .222 Remington. This soon morphed into the .222 Remington Magnum in order to try and meet performance specs. Winchester, having had their name on the 7.62 x 51 were keen to be a player and introduced their new LMR (Lightweight Military Rifle) and cartridge, the Win .224 E1 and later upgrade, the E2, to compete in the trials.

Neither was adopted with the ‘winner’, in 1963, being the collaborative result of work by Eugene Stoner and Remington. This was initially called the REM UMC .222, then the REM UMC .222 SPL (Special) but was later stamped REM UMC .223. In 1980 it was adopted by NATO, becoming the ubiquitous 5.56 x 45. Whilst both SAAMI and CIP only spec the .223 it is generally accepted that Mil Spec 5.56x45 Ball can exceed SAAMI limits in a chamber cut for .223 Rem. The 1966, 278-page review panel summary report of the various LMR, AR15 (M16A1), M14 and (yes), AK47 rifle trials was declassified some several years ago and makes interesting reading, especially the significant volume of malfunction issues:- www.dtic.mil/dtic/tr/fulltext/u2/a953116.pdf

TOO HOT TO HANDLE

So, let’s get back to our subject, the Winchester .224 E2 Ball. The immense contribution of this cartridge to the AR15 trials is often overlooked. The original E1 Ball cartridge used Winchester Olin’s own propellant, however it was found that chamber heating from repeated fire caused the cartridge to develop over 60,000 psi, 2,000 more than the design proof figure! The only solution for Winchester was to increase the neck length and ‘bite the bullet’ and use a cooler tubular propellant made by one of their competitors, namely IMR’s 4475. The important .224 E2 53-grain cartridge had arrived and due to supply issues, became the prime fodder for use in the early evaluation of the AR15. It was ironic that its dimensions allowed it to function in the AR15 whereas the .222 Rem Mag would not fit the LMR. Whilst the Winchester LMR proved inferior to the AR15, it has become seriously collectible given that less than 45 are believed to have existed. Indeed, serial number 26 was valued at over $5000 back in 1965.

It is generally accepted that all Win .224 E2 ammo was produced with a 1958 headstamp and that the remaining quantity of unfired ammo is relatively small. Indeed, I’m donating a sample from my box to fill the gap in the collection at the Birmingham Gun Barrel Proof House. Yes, it will chamber and fire in a rifle cut for .222 Rem Mag, but why would you? Neck resizing and bullet seating could be achieved with .223 Rem Mag dies and shell holder. Load data and drawings are non-existent and the original propellant was never commercially released, making it a potentially challenging development project. Alternatively, why not just add this important pioneer to your collection?