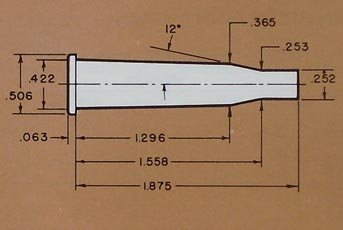 During the period between WWI and WWII Winchester engaged in a spate of rimmed and semi-rimmed .22 calibre (.224”) centrefire ammo development that includes the .22 Hornet, .218 Bee and .220 Swift. This month’s subject was born in 1937 using a design based around a necked down .25-35. Its rimmed case bearing a resemblance to the legendary Hornet, having a very shallow neck angle albeit with a greater degree of body taper. Intended for use in their ubiquitous Model 64 lever action. The Winchester .219 Zipper seemingly failed to live up to the hype surrounding its performance and accuracy. Practical considerations surrounding its use in the lever action tube mag were an impediment to ideal bullet selection. The earliest Zipper ammo from Winchester being a 46 and a 56-grain soft points. Nonetheless, they were rated at almost 3400 and over 3000 fps respectively. So it did ‘zip’ along rather well. So much so that it spawned a number of notable children, including the .219 Donaldson Wasp and .219 Zipper Improved, not to mention a host of wildcats.

The superb velocity figures were rather meaningless in the light of the reportedly modest accuracy. The 1 in 16 twist of the Model 64 seems rather shallow for the bullet weights and that may not have helped matters. In any event, the Model 64 was dropped just a decade later leaving the Marlin 336 as the only production rifle chambered for the cartridge. That model soldiered on until 1961. Plenty of custom builds appeared, from sporterised Springfield Model 1898 bolt-action Krags, Winchester Highwalls, Savage Model 99s and FN Mausers but the numbers were small. Nonetheless, some single shot U.S. custom rifle builders still list it. To defend the accuracy of the cartridge we need to turn to ‘Practical Dope on the Big Bores’ published in 1948 by F. C. Ness. He did quite a bit of work with the Zipper (hardly a Big Bore!) in an iron sight lever action and claimed 100 yard groups down to 1½”. As accuracy goes that’s not too shabby!

Commercial ammo is of course no longer available so it’s home brew only. Hornady, Redding and RCBS all list tools. Big brand brass is no longer to be had but a couple of the smaller shops in the States still produce it. Midway USA quote cases from Quality Cartridge and a quick Google shows Buffalo Arms offering it as well. Donnelly quotes ‘make from .30-30 Win’ but it’s quite a lot of work. Alternatively you can size .25-35 brass through the Zipper die and then turn and thin the necks. Bullets are plentiful, the .224 being one of the most common in the book. Data is in most of the manuals and the choice of propellants is wide enough to ensure you’ll find something suitable on the shelf. Stay away from the higher charges if you’re loading for use in an L/A as brass life could become an issue. Hot loads are reputed to generate damaging case ‘stretch’ from the action. The only other issue can be excessive rim damage. In tighter twist barrels the heavier Hornady V-Max pills seem to get the best results from this calibre.

The relative obsolescence of the guns and ammo make this old calibre one for the collectors and Classic Rifle competitors rather than the small game baggers and pest controllers. Model 64’s do appear from time to time, as do the more practical Marlins. Prices are not prohibitive.