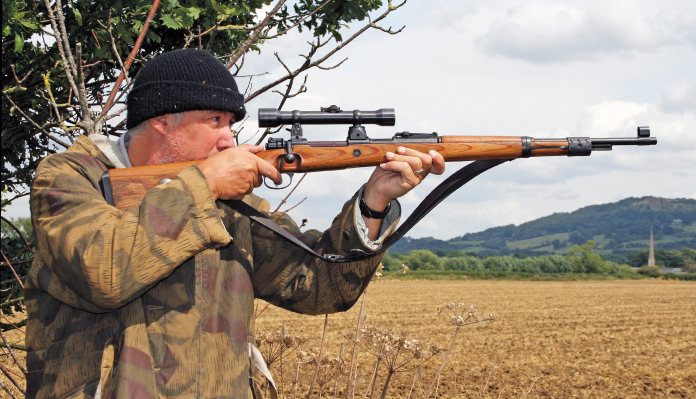 In Part 1 I sourced a period K98 Mauser, Zeiss Zielvier scope and up dated them with modern made reproduction high turret mounts and a Timney trigger to produce a practical repro K98 sniper rifle. The next stage now after the initial sighting in process was to work up a series of reloads suitable and legal for deer management here in the UK. Pretty ironic really whereas the previous owner was probably trying to get to these shores in days gone past!

The K98 was chambered for the 7.92mm round or more commonly known 8x57mm Mauser. It’s a cracking cartridge that I was soon to find out for myself but has an illustrious history with many military countries. Paul Mauser developed this round as a pure military option for the Model 1888 Mauser rifle. This originally used a 0.318” bullet but in 1905 certain changes were made and the bore size was changed to 0.323”, which is now the standard bullet diameter. As such we now have a whole raft of 8mm projectiles due to the continued popularity of this bullet.

Standard military loads use a 197-grain bullet, I had HP loads that shot 2459 fps so I used these as a standard control load to work up my reload hunting ammunition. In fact that case design has spawned a few cartridges of its own throughout the years, noticeably the .257 Roberts, .275 Rigby and actually pre-dates the venerable .30-06 by at least 18 years.

The 8x57mm case is just about perfect for its diameter, allowing an efficient powder charge for the bullet weights that I sourced from 125 to 220-grains. I was looking at the lighter pills for British deer but actually when you look at an 8mm you soon realise that the extra diameter makes a bullet of mid weight i.e. 150 grain look really dumpy. To obtain the correct proportioned weights the 180 grains plus projectiles brings the 8mm really into its own.

Powder choice is easier as mid range burning rates work best in a 24” tube with 0.323 diameter. So powders such as Vit N150, Varget, RL15 or H4895 work well but faster burners such as Alliant RL 10X are excellent with the 125-grain bullets. I bought a cross section of makes all expanding types so my loads would be deer legal. This experimentation would allow me to ring out every last bit of accuracy that old K98 bore could offer.

Regards cases F.A. Andersons had some virgin 8x57 RWS brass which I snapped up; this is top quality. I used Federal large rifle primers, match primers, which often give better results too. First up were the Hornady 125-grain soft points (SP). These are not really standard 8x57mmm for deer but a load of 48-grains of Reloader 10X worked rather well. Groups were running 1.5” at 100 yards and velocities good at 3209 fps/2859 ft/lbs.

Stepping up the weight the 150-grainers (Sierra spitzers and Hornady Interlocks) both shot well, despite their dumpy look! By the standards of that old bore, nothing less than 1.5” but hey I was delighted.

IF IT AIN’T BROKE…

An intermediate weight was Hornady’s 170-grain, round nose Interlock, again an old fashioned design but at close range a real deer hammer. I loaded up 52-grains of Vit N150 for 2601 fps/2554ft/lbs, accuracy was iffy at about 2” but still good enough! On the other hand the Sierra 175 grain ProHunters shot remarkably well as the weight increased you could see the groups shrink. Here a load of 48-grains of H4895 worked wonders, although 49-grains was too hot. Accuracy held good at 1.5” and a nice closer range deer round.

Best of all though were the 195-grain Hornady Interlock SPs. These are about perfect weight for the bore and again look just right. They have a BC of 0.410 and although a flat base and not a boat tail design they consistently placed three bullets into 1.25-1.5” groups at 100 yards.

Best load was the 46-grains of good old RL15, my favourite all round powder gave 2356 fps/2404 ft/lbs but not quite 2450 fps minimum for Scotland but 47- grains was 2407 fps. A bit more I am sure would work although Varget at these velocities was a bit hot in this chamber dimensions..

The heaviest bullet I had were Remington, 220-grain SPs. Now I started to notice the recoil, a metal butt plate might be good for warfare but on a loading bench starts to hurt after 100-rounds! Now a load of 51-grains of IMR 4007SC powder was actually rather good with 1.65” accuracy at 100 yards. This achieved 2302 fps/2589 ft/lbs but might be a little bit hot. Hmm, I wonder if we could sub-sonic that one?