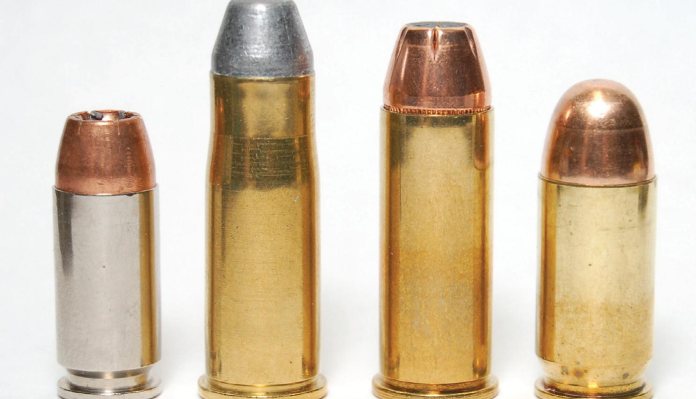 TOO HOT TO HANDLE

We’re familiar with the ‘one calibre fits all’ claims regarding the use of both the .44 WCF and the .38 WCF in a rifle and side arm. However, for the .38 the truth is slightly different. The original was intended for use in a chambering in the Model 1873 Rifle. The ballistics of the original design confirms that it drove the 180-grain lead pill at around 1200 fps. Marlin introduced a hotter variant for their Model 1894 rifle design, using 40-grains of black powder and stamping the rifle Calibre .38-40. The result was the destruction of significant numbers of early Colt revolvers and competitor’s rifles due to over-pressure. This design was relatively short lived, giving way to a compromise smokeless powder specification.

Manufacturers of some brands of ammo, chamber reamers and sizing dies seem to have paid scant regard to dimensions. Buy a box of ammo and it will usually chamber but may slop around a bit. Resize the painfully fragile brass with your modern steel die and the resulting ammo will probably slop even more. To minimise the poor fit in single chamber arms the well lubed case should be progressively neck sized and chamber tested until it headspaces correctly and the neck will cleanly accept the expander plug.

Unfired brass, thanks to the sport of Cowboy Action Shooting (CAS) is available. All the major brands list tools and lead bullets and moulds are also catalogued. Jacketed bullets are available but they’re often unsuited to either the ballistics or rifling of most arms chambered for this calibre. Many manuals take the trouble to distinguish between cowboy revolver loads and the hotter recipes for modern rifle use. Whilst Marlin introduced their shallow rifling design, many early arms had tight bores and deep-cut Ballard rifling. Slug your barrel and construct the ammo accordingly.

Assembly is a delicate art, any slight snagging when seating the pill will collapse the flimsy neck. The vagaries of poor cartridge to chamber fit also impact upon case life, even with ‘light’ loads. As usual, the tube mag rule applies… nothing pointed and a firm crimp. I’m not a fan of heavy roll crimps but I’ll make an exception for the .38-40 WCF.

Antique and later collectible rifles are about, from around £500 for a second hand Armi Sport, Chiappa or Uberti repro to £5000 for an original museum quality Model ‘73. All of them can find applications from Classic comps to CAS and Long Range. Just remember that not all arms are proofed for modern smokeless loads!