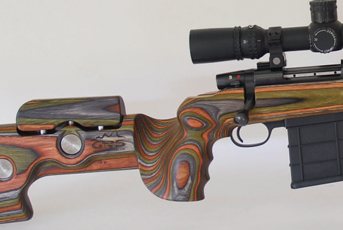 Hornady’s 6.5 Creedmoor was built as an accurate cross course performer initially for target shooting. The inspiration was doubtless the 260 Remington, which in essence is a shortaction version of the original 6.5x55mm Swedish.

Like the 260 the Creedmoor uses a 308-based case. Similar and a tad older than the Creedmoor is the 6.5x47mm Lapua. In fact all three are very much alike with the major difference being the case length and shoulder angle, which is more on the two later calibres. The 260 is longest at 51.7mm, the Creedmoor 48.8mm and the Lapua 47mm. They pretty much do the same thing, building as they do on the good ballistics and inherent accuracy of the generic 6.5mm calibre.

LEVEL PEGGING
Though each purports to be unique the bottom line is if you have one it’s not really worth changing to another. However, if you don’t the choice seems to be the Creedmoor or Lapua as being more modern than the 260 they probably have greater appeal! I had none but I do have a 6.5x55mm Swedish, which is for hunting and I am very happy with it. However, Hornady asked me if I would like to test the Creedmoor and I was interested, and it also gave me the chance to add a more precision/varmint type gun to my battery.

This semi-custom build uses a Weatherby Vanguard action and GRS Sport/Varmint stock and a 26” Bergara medium weight, tapered stainless barrel. I picked an 1-8.5” twist rate as I was more interested in light/ medium weight bullets. Synthetic and pillar bedded and threaded ½ x 20 for a Hardy Gen III moddy, I fitted a Nightforce 3-15x56 with Zero Stop turret and also dropped in a Rifle Basix trigger and a box mag conversion.

The gun will not shoot 140-grain bullets, be they factory or reloads and I have tried both! I put this down to the twist rate! My fault as I assumed it would handle 140s OK.

However, I was not that bothered as I doubted if I would be shooting a lot of long range paper targets with it!

THE QUEST
What I was trying to achieve was a fast and fl at, lightweight bullet for varmints/foxes along with a target load and something heavier for deer, as always with best possible accuracy etc. For factory ammo I had Hornady’s 120 and 140-grain A-MAX and 120 GMX (non lead). Hornady now print data on the box (charge, powder, primer and COL) so you can duplicate the load.

The 120 GMX and 140 A-MAX proved non-starters as they would not stabilise and shot big and ragged groups. I was not surprised as I have had similar results with other GMX calibres and I reckon the twist rate did for the 140s. However the 120 A-MAX was shooting a cool .25” @ 2865 fps/2197 ft/lbs, which does not get much better than that. Trying the duplicate handload of 39-grains of Varget I got the same .25” but could not quite match the performance at 2789 fps/2082 ft/lbs.

Switching to H4350 with the 120 A-MAX, 45-grains got me an impressive 3095 fps/2564 ft/lbs but groups opened up to .75”. The extreme spread (velocity deviation) showed a horrendous 294 fps, fluctuations like that would certainly tell as the range increased.

There’s little doubt accuracy is addictive and .25” is more attractive than .5”, which in itself is excellent. So for me the 120-grain A-MAX either factory or reload duplicate makes the best all rounder, varmint, target and most deer species choice. Moving up to either the Hornady Interlock or Nosler Accubond gives the heavy hitters for larger deer.

PERFECT?
So what would I change if anything? The rifle sits in a sort of heavy hunter/light varminter slot and had I wanted a target gun then I would have gone for a heavy/fluted barrel with a 1-8” twist for 140-grain bullets. I think at 26” the medium/tapered tube is a tad too long and flexible. I will be getting it cut to 24”, likewise fitting a hardy Gen IV moddy, which is shorter and lighter than the current Gen III. What of the calibre?

It’s hard to go wrong with a 6.5mm! The short action case is economic to load, pleasant in the shoulder with a massive bullet choice. The Creedmoor offers, great accuracy potential and performance in a well behaved and versatile package. The Hornady 120-grain A-MAX load is brilliant and I have no doubt the 140 is as good with the right rifling pitch. I would like to see a factory 123-grain A-MAX too.

My thanks to Jason Hornady and Chris Hodgdon for their help and support.