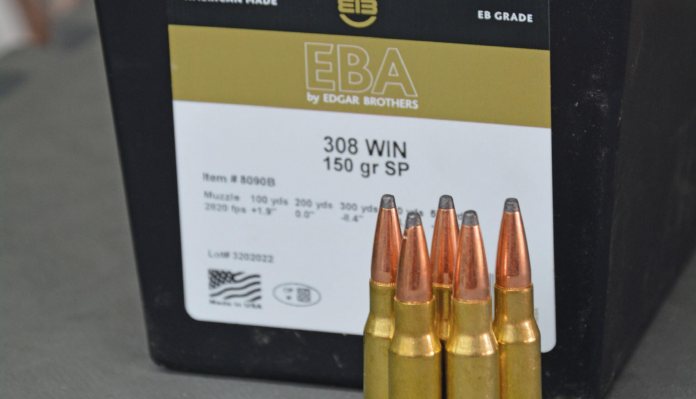 Edgar Brother’s EBA Ammunition is an economical hunting round that’s available in .243/100-grain and .308 150/180-grain too. It’s supplied in large polymer cases of 100 rounds and offers a more economical approach to volume shooters who aren’t pushing the ranges or ballistic limits and just need a reliable hunting round. The ammunition itself is made in the USA by Hornady and all cases are brightly finished, well-polished and annealed with no corrosion.

I used the 150-grain .308 Win variant in a few test rifles and found, on average, it hovered just around the 1 MOA threshold that’s so commonly expected.

The muzzle velocity listed on the box of 2820 FPS was almost reached in a 22” barrelled Sauer, which summoned 2786 FPS, for 2586 ft/lbs of energy. The blunt, soft noses were reasonably uniform for consistency with a plain tangent ogive to the jacket beyond. This generally makes ammunition more forgiving across a wide range of barrels at hunting ranges.

Even if it’s not the latest and greatest in terms of ballistic coefficient (BC) and long-range precision, this is straightforward ammunition for hunting with what may be seen as an old fashioned but well understood and reliable bullet form.