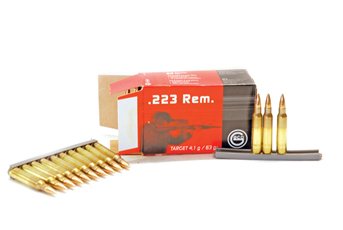 Geco, that’s just cheap stuff; if you want real quality German ammo then get RWS! That bald statement might have been true 10-years ago, but Geco which is owned by RWS has really upped its game in the last few years. In the old days we Brits just saw the standard soft point in 243 and 308 Win, good ammo and well priced but it never got the pickup I felt it deserved!

Today they have two new hunting lines; Express with its hollow point ballistic tip and Plus which is a protected hollow point. I have used both and was impressed. However, the subject of this test is nothing to do with shooting animals. Given the global popularity of the 223 Remington in both sport shooting and military usage you’d be a fool not to make something to suit. So what we have here is the Geco Target.

Packed in very non-military red boxes of 50, the ammunition gives a clue to one of its intended end users as inside are 5 x 10-round chargers, for easy loading into 223/5.56x45mm magazines via a guide. This on its own will please the more Practical shooters who use AR15s and similar straight-pull service-type rifles. I’d guess that this same load in different packaging is sold to the military and police. This is further strengthened by the fact that the primer is staked in and lacquered around the edge to make it waterproof. The headstamp however is all civilian with Geco and 223 Rem.

The load uses a mid-weight 63-grain FMJ, boat tailed bullet and is crimped in the case and also sealed in the neck with a Bitumen-type compound. The base of an FMJ like this is usually exposed lead, but in this case there’s a brass disc, which I assume is there to stop melting of the core, which could cause inaccuracies. Pulling a cross section gave an average weight of 63.2-grains, which is pretty good. The powder is a fine flattened ball-type not dissimilar to BLC2 and comes in at an average of 23.9-grains.

I shot the Target through a Browning A-Bolt Target Varmint with a 22” barrel and my own, accurised Ruger Mini 14 (18.5” tube), both rifles offering a 1-9” twist rate, which is ideal for this weight. Accuracy was good with both guns shooting around .75” and the Browning occasionally dropping to .65”. Geco claims a velocity of 3117 fps from a 24” barrel, though neither gun was capable of this with an average speed of 2888 fps from the A-Bolt and 2832 from the Ruger.

No problems with feed or primary extraction in either rifle, which is an important factor if you shoot a straight-pull. Overall no complaints, a quality round in a popular calibre and weight that won’t break the bank.