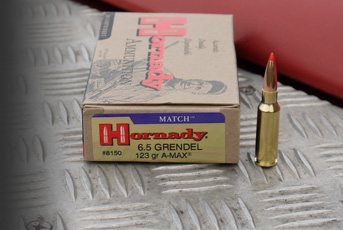 I’ve been running a 6.5 Grendel bolt-gun for the last three years; it’s a custom job from Riflecraft using a box mag, CZ 527 chassis. This little intermediate round punches well above its weight and in essence will outperform a 243 Win, doubtless due to the more efficient calibre/projectile used. Even though it’s running on a 1/3rd less powder, I don’t know how but it does!

Factory ammo has been near impossible to get in the UK, plus as a hunter I don’t want FMJ, so I reloaded and after much experimentation found a 100-grain Nosler Partition does the business and will shoot ¾-1” @ 100-yards. I tried heavier bullets but with less success and worried about excessive pressure in what is after all a small case, my load is generating a comfortable and highly effective 2869 fps/1827 ft/lbs.

So the news that Hornady was offering a 123-grain load using their exceptional A-MAX bullet got me interested. I was initially cautious, with my past experience of going 100-grains + in terms of accuracy, pressure and energy, as it had to make the minimum of 1700 ft/lbs. The A-MAX is seen as a target bullet, which it is, however it’s also rated for thin-skinned game (deer) and one I used in my 308 Win for many years with great success in the 168-grain version.

The build is a boat tail, ballistic tip, with the latter giving good ballistics, resisting point deformation under recoil and also initiating expansion on animals. In 6.5mm this gives a long and slim projectile that offers good sectional density. It’s no wonder there are so many 6.5 calibres out there as it just does the job on paper and game equally well.

My rifle has a 22”, medium-weight tube so making it a tad more efficient than the more normal 20” AR15 platform the Grendel was originally designed for. Testing was done at 100-yards off a bipod with a bag under the butt. The first group shot just a tad over ½”, which impressed, with just a few clicks of windage required from my 100-grain Partition load settings. Over the chrono (CHRONY Beta Master) it was averaging 2633 fps with an extreme velocity spread (ES) of just 14.92 fps and a standard deviation (SD) of 8.12. Hornady quote a speed of 2580 fps, so better than what they say!

Muzzle energy turned in a pleasing 1893 ft/lbs, which compares very well to the 1827 ft/lbs of my Partition reload. Likewise at 300-yards, which is my maximum hunting range the A-MAX is still carrying 1246 ft/lbs as opposed to the 988 of the Partition. However, we must not forget that this load was primarily designed for target shooting and should be more than capable of doing the business at 600-yards +. So whichever way you look at it Hornady’s, 123-grain A-MAX 6.5 Grendel ammo is a serious mighty midget. Plus the availability of factory fodder means that more shooters could well be tuned on to this impressive little cartridge. I will get some 123 A-MAX bullets and just see if I can duplicate the factory load, if not then I’ll just buy a few hundred rounds, which should keep me in ammo for the foreseeable future.

•For: Accurate, energy efficient and easy to shoot

•Against: Not a thing