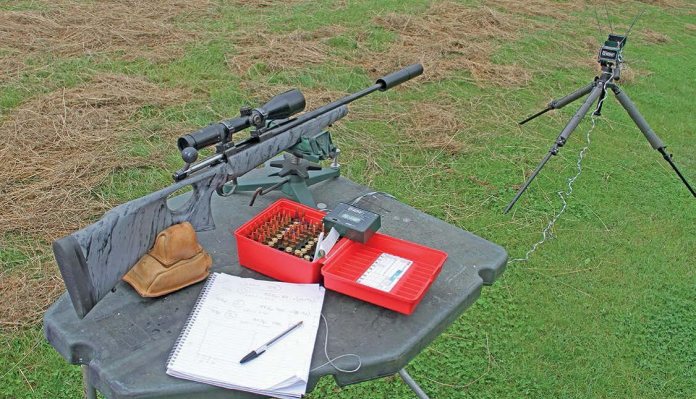 Lead-free bullets are becoming the norm and here we have some Hornady .30 cal GMX (Gilding Metal Expanding) bullets. This gilding metal is basically the same jacket material used in conventional, lead-cored rifle bullets and consists of 5% Zinc and 95% copper. As such, it is of monolithic construction like most lead-free bullets, being made of one homogeneous piece of metal but designed to expand, unlike the old monolithic or solid bullets designed for dangerous game. These were constructed to penetrate deep into the vitals and not expand.

Hornady has engineered into these bullets an aerodynamic profile with boat tails to mimic BCs from similar weight, lead-cored bullets. Plus, cannelures that help to reduce the friction from the long bearing surface and tough overall construction of these bullets. To help aid in expansion, so necessary for lead-free bullets, the GMX has a red polymer tip covering a hollow point design that penetrates right down to the core of the bullet to create a lethal mushroom profile. This helps to distribute the stored energy within the travelling bullet. It must be noted that Hornady state that velocities ranging from 2000 to 3400 fps are needed to expand this bullet.

Other advantages of the gilding metal are that it does possess slightly better lubricity than pure copper bullets, which means less metal fouling and lower bore friction than copper. It is also slightly more pliable than pure copper, so the bullet expands and then stays expanded without deformation to continue to penetrate and distribute energy. In the tests, you will see they expand quickly, with the nose section mushrooming right down to the solid rear section of the GMX bullet, where it stops.

It’s worth mentioning the non-lead GMX are longer than the same weight lead-cored bullets due to the density being different. As a result, most copper and non-lead projectiles are seated deeper into the case. I have loaded these test rounds as close to the 2.800 OAL for the .308 Win as possible, to duplicate the same velocities between the control bullets (Nosler Ballistic Tips) and these GMX.

The 110-grain GMX has a small boat tail design with a short bearing surface and a single smooth cannelure. The ogive section is quite pronounced and with a bullet length of 1.1905”, it’s actually taller than the 125-grain GMX bullet. This is because there is a very large hollow point cavity inside. Obviously designed to expand quickly, this GMX has a sectional density (SD) of 0.166, a ballistic coefficient (BC) of 0.305 and a diameter of 0.3075”. It’s recommended for medium game between 50-300 lbs.

The 125-grain GMX is 1.1640” long with a small boat tail and longer bearing surface. There is a single cannelure and the bullet’s diameter is 0.3075”. When sectioned, you can see the red polymer tip fits into the hollow point area, which is more than half the length of the copper section of the projectile. You have an SD figure of 0.185 and a G1 BC value of 0.295. The latter is less than the 110-grain GMX as the lighter projectile is more streamlined. Hornady recommended this bullet for 50-300lbs medium game usage also.

Finally, the 150-grain GMX has a 0.3070” diameter, so smaller, with a more pronounced boat tail and longer bearing surface. There are two cannelures starting at 0.4405” from the base. The red polymer tip sits in the hollow point, which is the same diameter as the other projectiles, but not as long. The 0.5480” length is less than half the total GMX length, so the bullet is obviously designed to penetrate more, with the majority of the rear portion driving the bullet forward. You have an SD value of 0.226 and a BC G1 figure of 0.415, so it’s geared towards longer range shots and bigger game. Hornady suggests medium game again as well as larger game at 300-1500 lbs.

I used my trusty Tikka .308 rifle for the tests and ballistic media to ascertain overall penetration, expansion, bullet weight retention and most critical, wound channel volume. This shows us how the GMX bullets really perform after being shot.

Please note that the figures in brackets on the ammo table are from my Harrell Culver Precision powder measure.

The results were interesting and broadly similar to the other lead-free bullets that I have tested. As expected, the lightest projectiles give the best performance and mimic a standard weight (150-grain) lead-cored bullet better. Velocities were close to the control (Nosler Ballistic Tip) bullets, so a direct comparison is valid in my view.

Let’s get the 150-grain GMX out of the way first. It definitely over penetrated, 19.0”, that’s all the ballistic media! I even found the bullet in the sandbank. This is borne out in its tougher/weightier construction, with the bullet only expanding to 0.5380” for the front section, whilst the rear portion (bearing surface) drove the bullet straight through with momentum. It created a long wound channel with a volume of 96 ml, nearly half that of the 110-grain GMX bullet. To me, it’s too tough for UK deer, as most of the energy transfer would be outside the beast, plus there is the increased risk of ricochets.

The 125-grain GMX was completely the opposite. More speed and a better and bigger hollow point translated into the quick expansion of the bullet (0.6045”) and 100% weight retention. It achieved 14” of penetration (still a lot) but dumped a vast proportion of its energy after 1”. The volume of the wound channel was 125.0 ml, the same (a bit more) as the conventional 150-grain Ballistic-Tip projectile. The bullet formed into a perfect mushroom, with the six evenly spaced petals curling round and inward to touch the base of the GMX bullet. Overall, very good and consistent expansion, which directly translates to the efficient release of the bullet’s energy - great for larger UK deer.

Finally, my favourite, the 110-grain. This bullet started expansion at 0.75”, penetrated to 12.5” and yielded a massive 176 ml wound channel. The cavity was short, wide and deep (2.15W x4.5L x 2.0D). The bullet shank stayed intact, with the frontal section splitting into petals/ shrapnel that spread out from the wound channel to the surrounding ballistic media. In fact, some exited the side of the media container, hence the not perfect 100% weight retention for this bullet. This means a great transfer of energy in and around the main wound channel for lethality in the real world. I would feel happy using this particular weight of bullet for Roe, Muntjac, CWD and Red.

No surprises really, as shown in previous tests, the lighter GMX gave the sort of performance we have come to expect of what I call the standard, lead-cored, 150-grain, deer bullet weight. I would definitely choose the 110-grain for smaller species of deer and I would use them on red and fallow too. The 125-grain gave better penetration and also managed excellent wound channel volume, so maybe a good all-rounder instead. Pressure from the loads tested in my old Tikka LSA55 proved no problem. The bore is old now, so it was hard to see any issues with fouling anyway.