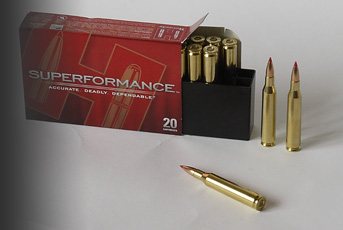 The 25-06 Remington is an acquired taste, but certainly an interesting one as it’s a versatile calibre in terms of what it offers. With light bullets it’s an awesome, flat-shooting foxer and with heavier weights (100 to 120-grains) will easily drop big reds. Based on a necked-down 30-06 case there’s ample room for powder, hence it’s good velocity potential.

Hornady who are undoubtedly at the fore front of ammunition development have a reasonably new round out called Superformance, which is along the lines of their old Light and heavy Magnum ammo. This is achieved by special, ultra-progressive powders that boost velocity without increases in recoil, blast and pressure. We are told this gives a 100-200 fps increase in speed over conventional loads of the same calibre.

Superformance is offered in a number of popular calibres and the latest addition is the 25-06 Rem with a 90-grain bullet. As you might imagine it’s stonking on a bit! Hornady offers two bullet options their SST (Super Shock Tip) which is a lead-cored ballistic tip and the newer GMX. This is 100% non-lead with a monolithic, guiding metal (95% copper, 5% tin) build. Inside is a slim, hollow point cavity topped by a polymer tip that gives good ballistics and initiates expansion. Hornady says it gives: “95% weight retention from 2000-3400 fps.”

I have to say that I have had mixed results with non-lead/monolithic bullets from various manufacturers; as from my experience they do not shoot as tight as lead-cored types. Testing was done with a Ruger M77 VT (Varmint Target) with a full 26” barrel, which will shoot the heavier weight projectiles at just over ½”. Hornady quotes a speed of 3350 FPS/2242 ft/lbs for the 90-grain GMX and the test gun turned in a very respectable average of 3300 FPS with an extreme spread (ES) of just 15 FPS; again very good. This translates into a muzzle energy of 2176 ft/lbs. Trajectory-wise with a 200-yard zero this gives around an inch +/- of drop out to 225-yards, with -6.7” at 300.

In relation to the more common 117-grain load, with a quoted 2900 fps/2184 ft/lbs it compares well, however, as the range increases the lighter 90-grain bullet loses energy a lot faster too. Accuracy was pleasing too with the combo shooting ½-3/4” with ease. For me the 25-06 Rem offers those looking for a longer range foxer a definite edge over calibres like 223/22-250 Rem and 243 Winchester. But at the cost of a larger cartridge and greater recoil/signature that is perhaps not so easy to moderate.

The 90-grain SST load is probably best suited to foxes, as it might be a bit destructive on deer species. The GMX represents a more versatile option with its tougher bullet that could do double duty on both species.