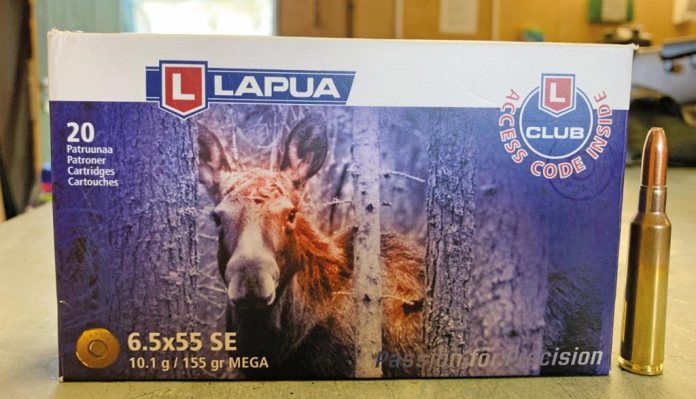 Doubtless we all have our favourite calibres and I’m no different. Two of my top choices are 270 Winchester and 30-06 Springfield, both powerful performers that are in truth maybe a bit too much for the majority of hunting I do in the UK. However, there’s one classic cartridge that has been my ‘go to’ round for many years; I speak of course of the great 6.5x55mm Swedish. Probably the most popular European number in the UK.

My first experience was way back, when I swapped a reloading press for an old Swedish Army Model 96 Mauser in 6.5x55. Picking a recipe out of a reloading manual, I went with a 140-grain Hornady A-MAX and I think Vit N150 and, even with irons sights, I could not believe how well it grouped at 100 yards. I was impressed, but it was not until later when I got my Mauser M03 Extreme that I selected the Swede as one of my barrel choices and have never regretted it. I’ve shot everything from Muntjac to Moose with it, not the most powerful or quickest calibre, but the slim, 6.5 cross sectional area means those long bullets go in and do their job and come out the other side on even larger species. Plus, it’s easy to shoot.

I’ve always used the traditional 140-grain bullet, usually a Nosler Partition, but there’s heavier and Viking Arms, who import Lapua ammunition, sent me their 155-grain Mega option. This option is what I would describe as a protected soft point, with the ogive extending up to the nose surrounding the lead, just leaving a flat, exposed tip. As can be seen from the pictures, the bullet is heavily crimped into position. The build shows a traditional, lead cored build that’s mechanically retained by an internal step, with a flat/solid base. Outside are two cannerlures, that probably reduces pressure a little on what is a long/slim build. The ballistic coefficient is .377, which is not a bad figure for its flat nosed and based design.

However, the question is, does this heavier bullet offer any advantages over the more popular 140-grain loading? Using my M03 with its 23.5” barrel, I was getting these figures (see table above):

Recoil is up slightly over a 140-grain load, but that is to be expected and is still not arduous and as can be seen accuracy is well within limits. Due to the calibre’s lower general speed and the heavier weight of the Mega, trajectory is greater and energy bleeds off faster than the lighter weight. For example, and setting a realistic maximum range of 300 yards, the bullet drops below 1700 ft/lbs at 130 yards/ 1693 ft/ lbs and drop at 300 is 17.48”, with 1863fps/1195 ft/lbs.

I’ve used the 155 load to hunt driven boar and at closer ranges the extra weight does exactly what it should do, even on tough animals like this. On deer, it’s exactly the same, with reliable expansion and good pass throughs on most UK species. In all cases it kills well and, in the right rifle, as I can attest to, is eminently accurate.