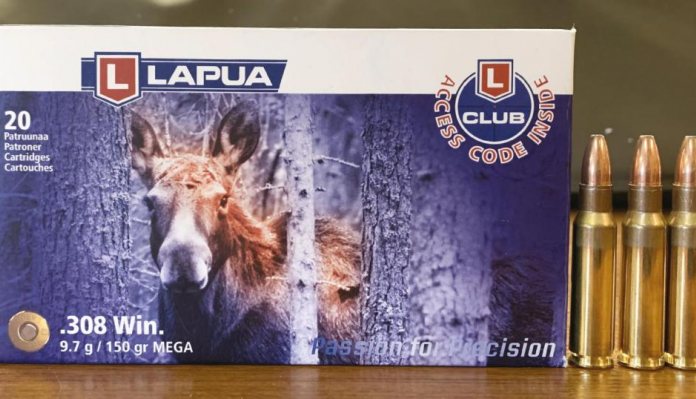 My first proper hunting rifle was a Riflecraft LSR (Light Sporting Rifle) in 308 Win, using a Remington 700 ADL for the base of what was to become one of the most cost effective, semi-custom guns in the UK in the early 2000s. The nasty, synthetic stock was binned in favour of an HS Precision unit, pillar and synthetic bedding was applied along with a re-crown to the standard 22” barrel, trigger tweak of the original Walker unit and, if required, a blueprint of the action. Mine did not and shot its pet load of a 168-grain Hornady A-MAX over 44-grains of Vit N140 into ½” at 100 yards.

Off the shelf choice

It occurred to me that an alternative factory load would be a useful thing to have to hand, lucky, as a few years latter it was announced that you could no longer use A-MAX for hunting. Funny that, as it seemed to work very well for me, but the law may be an ass, but it’s still the law. I had been given some of Lapua’s 150-grain MEGA ammo to test and, although quite far removed from my reload, it shot an easy ½” and in truth was man enough for all species. So, I bought some in and used it until I shot my barrel out, which is another story.

Since that time, I have not owned a 308, but recently Lapua importers (Viking Arm Ltd) sent me a cross section of their ammo for general gun testing, amongst it was their 308, 150-grain MEGA loading.

Ammo comes in packets of 20 in a cardboard liner, good for the environment, but when it gets damp it makes the rounds hard to get out and breaks up quickly. The bullet is not one of your hi-tech designs, with its flat base and protected soft tip, with the jacket going right to the nose and shows two shallow grooves around the shank, doubtless to ease off the pressure a little. The lead core is mechanically locked for mass retention and is recommend for medium to larger game. For such a blunt design, the ballistic coefficient (BC) is a deceptively high at 0.330.

Lapua quote a muzzle velocity of 850 MPS, which equals 2788 fps/2589 ft/lbs from a 26” test barrel. I tested this load through a Winchester XPR (Extreme Performance Rifle) with its 22” tube, just about the perfect length for this calibre as a hunting tool. Here, it averaged 2739 fps/2497 ft/lbs, with an extreme velocity spread (ES) of 14 fps and a standard deviation (SD) of just 8.1 fps; not bad figures from a massproduced firearm. Group size came in at a pleasing 0.6”; well, you can’t ask for much better than that!