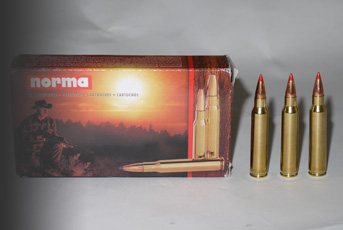 Though there are other more powerful 22 centrefires around, without doubt the now aging 223 Remington has made a big impact in the UK, with no sign of giving up. Near replacing the 222 Rem and certainly the most practical choice for short/medium range foxing (200-yards ish) even over the 22-250 Rem and 220 Swift, it’s become a yardstick for many of us. As it offers good performance, high accuracy potential and is certainly more cost effective to buy or reload than the aforementioned larger cartridges.

In the old days ammo choice was limited but today you can go as low as 35-grains right up to 90 for long range target use, that may sound mad but with the right load and rifle you would be surprised and impressed. I use a Mauser M03 in 223 Rem for foxing and muntjac and tend to stick with a 55-grain load as it works well. However, recently I have started using the M03 for rabbits and hares and though I love my 17HMR, which I can push out to 200-yards on a good day, something with a bit more grunt and legs would not go amiss. Something that caught my eye was Norma’s 40-grain, Varmint load that uses Hornady’s well respected V-MAX bullet, as I wanted it to shoot flat and give good terminal ballistics when it hits. This one does it in spades!

My initial concern was the twist rate, as my Mauser 223 barrel is cut at 1 turn in 10, which for the UK is a bit unusual, with the majority using either 1-12, which is still considered the standard and the quicker 1-9 or 1-8. Saying that I would imagine that the old 1-14 would handle this lighter bullet too. I was pleasantly surprised as initial testing showed the rifle capable of shooting ½ - ¾” and from a sporter-weight tube too! I reckon with a pure varmint gun a solid ½” or better would be the norm.

Norma quotes a speed of 1130 mps, which translates to 3707 fps and I was pleasantly surprised to find the 40-grainers where almost on that at an average of 3701 fps/1221 ft/lbs. These figures came from the Mauser’s 23.5” tube. Typical of a light fast bullet energy drops off at range a little, but if we are just talking shooting rabbits, hares and corvids then more than enough grunt for the job. Even at 500-yards the bullet is still carrying 200 ft/lbs + which is nearly three times that of a 22 Long Rifle sub-sonic at 100-yards, which puts it into perspective.

However, it’s no deer load, legally or morally as at 40-grains it’s under the 50-grain minimum proscribed by law and also I feel far too frangible to give effective penetration even if it was allowed. But as a flat-shooting, hard hitting varmint cartridge it represents an excellent option.