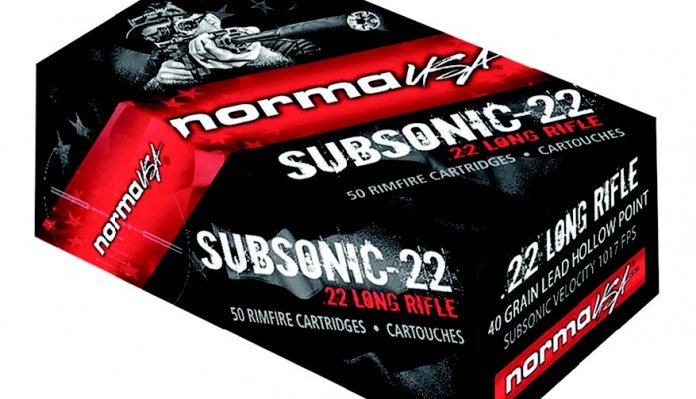 I’ve been to the Norma factory in Sweden and seen what they produce; it’s all centrefire calibres. So, when I discovered that they were now offering their SUBSONIC-22 hollow point, ammo, I assumed they’d added a rimfire production line, wrong! This ammo comes from Norma USA and is part of a line of 22 Long Rifle (LR) aimed at hunters, action shooters and plinkers.

Opening the box things started to look familiar, as the shield with an R in the centre is the headstamp for RWS ammunition and in their Field Line range make a similar 40-grain 22 sub. The 50-round plastic cartridge holder (inner) is also the same. However, the bullet is slightly different with a lighter feeling, oil-based lubricant, as opposed to the heavier wax coating of the RWS that tends to bung up the HP cavity. Equally, the Norma’s driving bands profile and its ogive shape differ, which gives a slightly flatter nose, with a marginally wider cavity.

Taking some rounds apart shows the Norma having an average bullet weight of 40.4-grains and a 1.3-grain charge of grey, flake propellant. They quote a velocity of 1017 fps with an estimated muzzle energy figure of 93 ft/lbs. As always with 22 LR, subsonic ammo, I shoot it through bolt-action and a semi-auto rifles with moderator to ascertain energy, ballistic performance and reliability the last in the self-loader. For the test, I used my Ruger 77/22 bolt-action and the new Hammerli Tac R1 22 semi-auto.

Shooting was done supported off the bench with targets at 50 and 100m, with data gathered by a Caldwell chronograph. I was more interested in the 77/22 results, as a bolt-gun is really the best platform for subsonics, to its credit, the Norma cycled the Hammerli reliably. Like all semis, it proved louder, as the action is blow back and you get noise coming through the ejection port as it opens.

The Ruger has always been an accurate rifle and the Norma certainly suited it; at 50m, I was getting around ½” and at 100m I’d say an inch. Secondary targets of shattered shards of clay pigeon of around that size were easily hit, so very much capable of heads shots on rabbits at this distance with confidence, or body shots for the cautious.

The chronograph showed the 20” barrel of the Ruger was getting an average of 957 fps/82 ft/lbs, which was lower than the quoted 1017 fps, ES was 34 fps. Zeroed at 50m it drops 9.76” at 100 with 811 fps/58 ft/lbs. Not quite as powerful as some brands, but certainly accurate. Tested on rabbits with body shots they tended to run on a little way as did hares, but with its accuracy potential, head shots at ethical ranges will nail them on the spot! The price is keen as it’s £1 - £1.50 cheaper than Eley sub-sonic, Winchester 42 MAX and RWS sub-sonic HP.