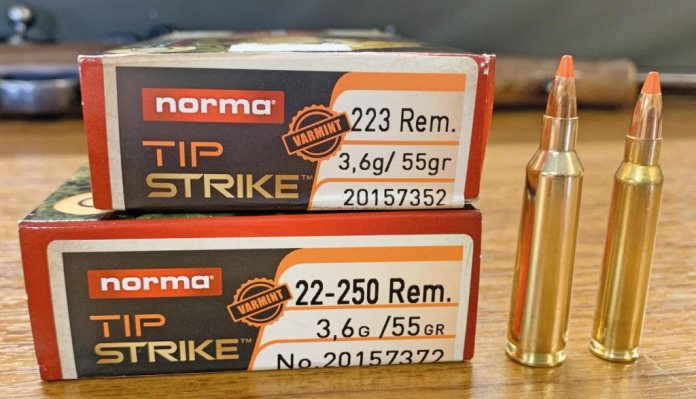 Having looked at the 243 Norma Tip Strike ammo when they came out a couple of years ago, I was only too pleased to see how their 223 and 22-250 Rem options would run through my rifles. Normally I reload, but it is always sensible to have the knowledge of a selection of factory loads that perform in my rifles; the added bonus being with Norma that I have good quality brass to reload as a by-product.

The Tip Strike is a polymer-tipped projectile that was developed to give a good combination of stopping power with deep penetration. Put simply; the tip causes the expansion when striking the desired target and, to maintain a high weight retention, the jacket is reinforced with a mechanical lock. The bullets are flat based, and the tip is slightly flattened off, unlike similar designs other manufactures produce. These rounds all fall within the dedicated Hunting line from Norma. In both calibres bullet weight is 55-grains; so, for England and Wales, potentially suitable for Muntjac, Chinese Water deer and vermin but could also be used for Roe in Scotland.

The rifles were my .223 Remington VSSF with a 23” barrel that is 25 years old, but still keeps on going and 22-250 Ackley Improved with a 26” Packnor stainless barrel. In the latter gun, the standard 22-250 case will expand (fire form) to the Ackley chamber with minimal loss of performance. Both loads shot well, and had it not been for the fact I definitely was not shooting as well as I should have, I feel the groups could have tightened up a little further. As it was, a regular 1 MOA were achieved at 100 meters with each. Since the initial test, I have further reduced this figure down to between ½ and ¾ MOA with both and now carrion crows are paying the price out to just over 200 meters. Where they doubtless felt safe, WRONG!

For both rounds consistency in all areas is good, which was evident on the range, second time round, and in the field. For reloaders, there is the added bonus of quality brass for future use, in particular the fire forming in my .22-250 Ackley was excellent. Both have worked well on smaller pest species; however, seeing the terminal effects on the two foxes shot with the .223 I feel they may be a little too damaging to be considered for the smaller deer species we are allowed to shoot with these calibres.