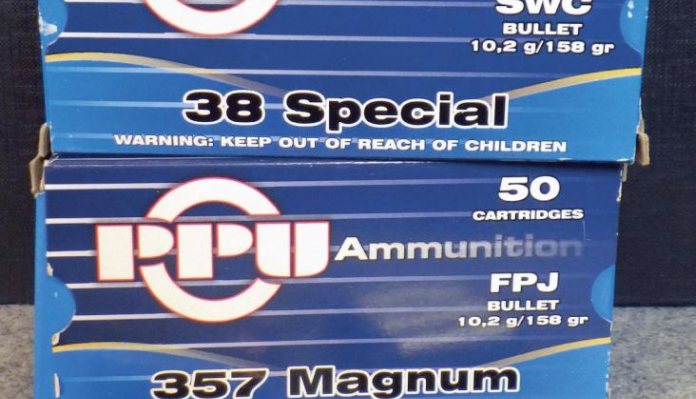 The PPU brand has been around for some time and their reloading components are great quality. Their rifle bullets represent good value for money and certainly perform consistently. The factory rifle ammunition is also good value and comes in a range of calibres and bullet weights. Their handgun ammunition, reviewed here, is less well known and also comes in a range of calibres.

On test, are two handgun calibres; in .38 Special, there is the 158-grain lead semiwadcutter and, for Magnum fans, there is the .357, 158-grain jacketed flat point. Contrary to the picture of the Magnum ammo on Kranks’ website, both rounds have a flat nose and are safe to use in guns with tubular magazines. The ammunition comes in boxes of 50 and cases are all brass, so are great for reloading. Both types of ammunition were tested in a Marlin underlever with an 18-inch barrel.

The Semi-wadcutters are an ideal round for use in underlever guns and they feed really well. The bullets are relatively hard and are not easily dented, so will travel through the action of these guns without being damaged. Recoil is very low, so shooting these rounds in competition, where fast shooting is involved, would be no problem. Velocities averaged 975 fps, which is higher than PPU’s own figure of 902fps, and were consistent, with all velocities measured being within 9fps of the average! Accuracy was good, with 3-shot cloverleaves possible and grouping generally good.

These rounds also fed well through the Marlin and the jacketed bullets are tough enough to stand up to any knocks. The recoil is obviously higher than the .38 special rounds but not at all uncomfortable. With an average velocity of 1643fps, which is close to PPU’s published figure of 1608, both recoil and muzzle flash were not an issue and shooting them was easily controllable. Accuracy was good with reasonable grouping and consistent point of impact.

With both calibres, the fired cases ejected cleanly and you are left with quality brass, ideal for reloading. The same bullets as those in the factory ammunition can be purchased separately, so that you can reproduce the factory loadings and fine-tune them to your own needs if you wish.

The ammunition tested is top quality and represents good value for money, costing only marginally more than the component parts if you were buying them separately and making your own rounds. For those shooters who do not reload, they are a very economical source of ammunition. If you normally reload, it is worth having a couple of boxes of PPU factory ammo in stock, just in case you don’t have time to reload in time for a shoot, or you need some new cases.