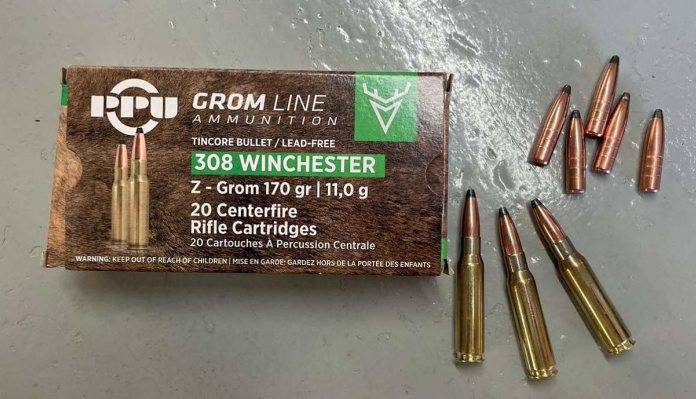 If you don’t know yet, then I’ll explain, the days of lead-cored ammunition are numbered, in as little as 2-3 years. It might not be such an issue for target shooting, as here the bullet residue can be A - contained and more importantly, B - collected and disposed of. Not so with hunting, as there’s no convenient backstop on the hill! This thrust has come from where else, but Europe, with the UK also getting in line.

It’s not as bad as it might seem, as there’s now an ever-growing choice of non-lead-cored ammunition and reloading bullets. The most common is the generic monolithic hollow point that’s made of solid copper. Expansion is initiated either by the hollow nose or a ballistic tip. This technology has a way to go yet, but I’m sure it will get to the stage where only old farts like me will remember when lead was king; bah humbug.

Most companies are on the ball or at least testing. So, let’s consider Prvi Partizan (PPU) of Serbia, a prolific manufacturer of all types of ammo. As they now offer their first non-lead product in the form of the Z-GROM.

Thunder from the east

GROM is Serbian for thunder and the name of one of their brands. It uses a monolithic (solid) copper bullet with a large cavity full of lead, with a soft tip. It’s aimed more at larger game and effective knockdown power. I’ve used it on boar and results were good, with both the nose and lead core fragmenting and expanding well.

PPU, literally, re-engineered the original GROM and substituted a larger tin core. This material is considered food-safe, so fits in with the whole ecologically sound thing and although not as soft as lead, will still expand effectively, given the right velocity and effective range considerations.

Importers Henry Krank & Co Ltd sent me 20-rounds of the 170-grain, .308 Win Z-GROM. The PPU website is a disaster for information on this product, as I could find zero information on other calibres, or its ballistic coefficient (BC), which I calculated at around 0.250 - 0.300, maybe. I did, however, find a quoted velocity.

I sectioned a bullet and as you can see, the tin core is like a slim, lemon shape that makes up for the majority of the bullet’s ogive, leaving the solid copper shank to provide pass-through. With only 20-rounds I did not have enough to go hunting, so cannot attest to its efficiency, but I’d say keep ranges short (200-yards max) and it should to the business. The price is good at £129 per 100-round, so just over £1 a pop, which is great these days.

I tested it in my 22”, Riflecraft LSR 2 and it was shooting pretty much MOA at 100m. PPU quotes a speed of 2509 fps and over the chrono it was producing 2507 fps while generating 2390 ft/lbs. Not amazing for a 308 Win load but good enough. PPU brass is good for reloading and they also offer the .30”, 170-grain, bevel-based bullet for reloading.