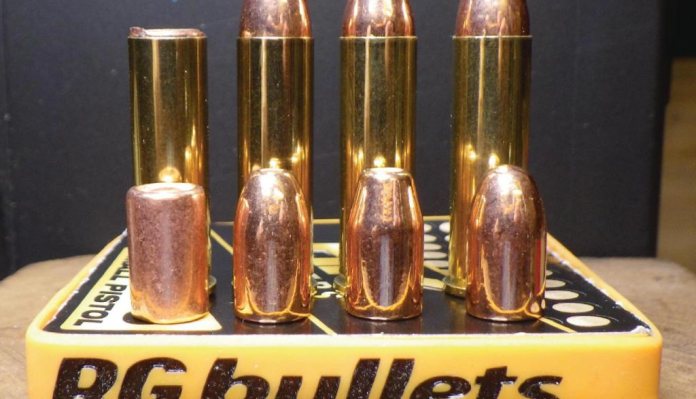 There is not a particularly large choice of brands when it comes to bullets, and copper jacketed or plated bullets tend to carry big price tags, so when Gun Mart ran an advert for a new make of copper covered bullets, priced very competitively, it immediately got my attention.

RG Bullets, from Spain, produce a large range of handgun calibre bullets in lead, jacketed and copperplated forms, plus a smaller range of rifle calibres. Here in the UK they are imported by Flecktarn and are available via mail order.

Copper–jacketed bullets are tougher than plain lead, making them suitable for higher velocity and magnum loadings, plus they also greatly reduce the amount of lead released into the atmosphere. The RG examples on test have a thick jacket which is well-formed and consistent. When I cut the bullets in half, the jackets remained fully bonded to the core.

The jacketed .38/.357 calibre projectiles tested were 158-grain round nose, conical nose and flat point profiles. Weights are very consistent but slightly higher than described, with the flat pointed bullets averaging 161-grains. Diameters are also very consistent with no discernible variance from .357”. They all seated without any problems, with bases perfectly shaped to enter the case mouth.

Plating is significantly thinner than a copper jacket, but it still offers some of the same benefits. Physical strength is provided to a lesser degree and plated projectiles will not withstand the same high velocities as jacketed types. With some indoor ranges now limiting the use of lead bullets, copper-plated projectiles are becoming more popular as they are cheaper and relatively ‘lead-free’.

The copper-plated bullets on test are the 148-grain, hollow-based wad-cutter with an actual weight averaging 148.5-grains. The diameter was .3575” on all of the ones I measured, and with the plating being so thin, this slightly oversize characteristic meant that when the bullets were initially seated, some of the copper scraped off. This was rectified by simply flaring the case mouths wider, but it is something you do need to consider with plated projectiles.

All of the 158-grain bullets were fired through a Uberti 1873 underlever and the wadcutters through a Taurus LBR. With indoor ranges closed, the testing was done out in the field in less than ideal conditions, standing, in both wind and rain. All of the bullets performed really well, feeding through the rifle and chambering/ ejecting faultlessly. With the underlever, groups were consistently under 2” and the wadcutters grouped extremely well, putting eight shots in one hole just over 1” across.

There is no doubt these are very well made and consistent bullets, with no rejects in any of the packs. Accuracy is good, with the wadcutters doing particularly well against my usual lead projectiles. All of the bullets tested are great quality and reasonably priced, well worth giving a try.