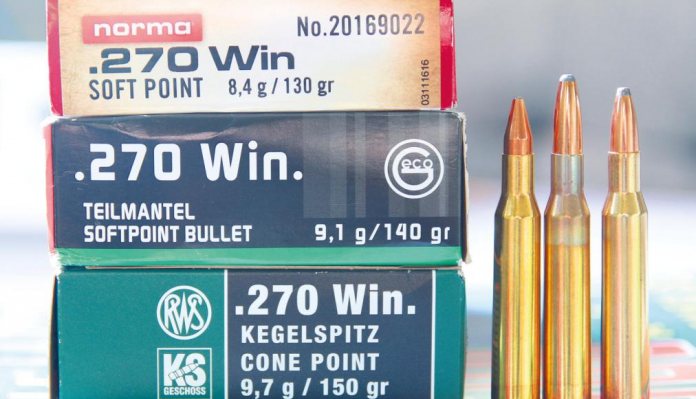 If there’s one calibre that has given us many and varied offspring, then it must be the good old 30-06 Springfield. In its original form, it represents a single cartridge that will pretty much do anything from Muntjac to African Plains game; however, some of its derivatives have also become modern classics! Others are a bit overlooked, like the 25-06 Remington (certainly in the UK) and others well respected but with a bit of a bad boy rep; I speak of course of the 270 Winchester.

As a young hunter, I heard many horror stories about the 270 being a meat mangler, which is true, given certain criteria. I was talking to an ex Forestry Commission ranger who told me that they used this calibre exclusively for deer control with heavier loads (I think 150-grain) and it did the business. However, a switch to a faster 130-grain projectile, using a lightly constructed bullet, turned it into a monster, with stories of deer carcasses being written off due to excessive damage. However, pick the right load and role the advantages become evident.

When I bought my Blaser R8 Professional Success and, after some serious consideration, I opted for the 270 using a premium bullet and it has been excellent, with great knock down power, guaranteed pass throughs and minimal tissue damage. Plus, I can switch to lighter bullets (95-110-grains) for foxing etc., stick with the 130s for general medium deer work or go up to the heavier 140-156-grains if I want more.

Saying that, I have found my 130-grain load will do just about anything I require of it!

We have to go way back in history for the roots of this calibre. It was developed by Winchester in 1923 and launched in 1925 in their Model 54 bolt-action rifle. In truth, it was based on the earlier 30-03 Springfield (now obsolete) that had a case length of 64.5mm as opposed to the 63.3 of the 06. Due to its power and flat-shooting potential, it proved popular but probably came more into its own in the late 20th Century, with most manufactures chambering their products for it.

Looking into the various bullet constructions shows that there is pretty much something for everyone. It all depends on what and why you hunt, as some will doubtless be more destructive than others, but you may want that, given the game or vermin species. Let’s look at two from Norma, the 110 V-MAX is clocking on at 3215 fps and 2525 ft/lbs; well, you wouldn’t be shooting deer for the pot with that one! At the other end of the scale, the 156 Vulkan is generating 2854 fps with 2822 ft/lbs and I’ve used it with success on wild boar.

I used my Blaser R8 with its 22” barrel for the test. Past experience has shown that on average it’s losing around 80-100 fps to any factory quote, so not too bad. Norma offer their ammo in 2 x 10 round biodegradable sliders than can be snapped in half and offer convenient carry in a pocket, they also make great fire lighters! Both Geco and RWS use the old cardboard liners, which are a bit of a pain. They all offer ballistic information in Imperial and metric notation and zeroed for 100m with drops out to 300m. GECO and RWS also quote a 25.5” test barrel and give bullet information too, which is good to see how its constructed and what game it’s intended for.

All three brands fed and functioned reliably, with the brass being eminently reloadable, as it’s Boxer-primed. My R8 is not moderated, so shows the usual sharp recoil and noticeable signature that I’ve come to associate with this calibre and, if you’re considering a 270, I’d recommend you try and have a few shots before buying and get it moderated. So, what about output and accuracy, see TABLE 1, TABLEs 2 and 3 shows drop, energy and speed at 200 and 300 yards from a 100 yard zero.

As can be seen, all show drops in velocity from their factory quotes, hardly surprising, as few hunting rifles have long barrels. Norma test with a 24” tube, which is perhaps more realistic. The 130-grain bullet seems to bring the most to the party out to 300 yards; however, the extra weight of metal on the heavier loads would be better at shorter ranges on heavily built game. I think that the final choice has to come down to bullet construction and animal species being hunted, certainly in this high-power calibre. And as can be seen, RWS, Geco and Norma offer some interesting and workable solutions.