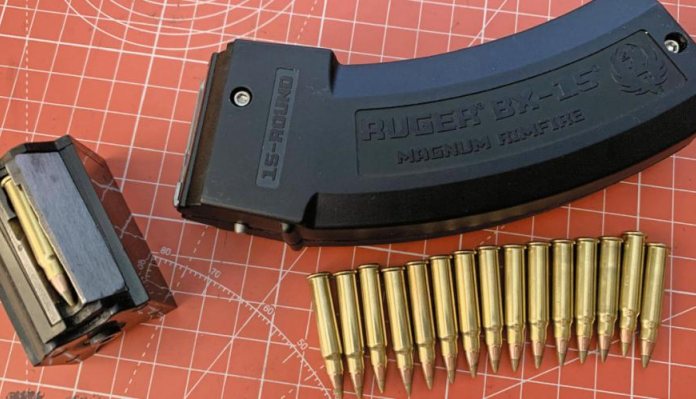 Ruger’s original series of bolt-action rimfire rifles (pre American Rimfire) were all based around a scaled down version of the their M77 fullbore. The main difference was the feed system that uses a slightly modified version of their 10/22 semi-auto’s rotary mag, which gave a 10-round capacity in 22 Long Rifle (LR). For the more powerful 22Magnum and 17HMR a larger, 9-shot model was used. However, if you wanted a higher capacity for the 10/22, then you had to go out of house, so it didn’t take Ruger long to introduce their own 22LR, 25-shot design the BX-25. Hardly needed for a rabbit gun, but a bit more payload can be useful; if so, the BX-15 (15-shot) could well suit. On test, the Magnum model for 22Mag and 17HMR, but there’s also a 22LR version. The build is hand-filling and consists of a single, column ammo stack, metal feed lips and a red follower and will fit any rimfire magnum Ruger rifle including the American guns. It’s longer than the 9-shot rotary model, but easier to insert and remove, as there’s a lot to get hold of, which was one of the issues with the 77/22/17 range, which you had to hook out at times. It’s also easier to fill, as you are just pushing the ammo back and down, instead of turning the rotor and compressing that spring. We also found feed generally better, as the rotary 9/10-shot clips can start to get a little unreliable as it gets older.