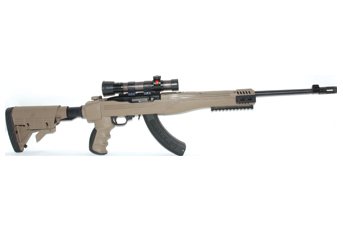 RWS have a fine reputation for all sorts of ammunition, perhaps best noted for their comprehensive range of 22 Rimfire. This to most shooters usually means Match/competition-types along with sub-sonic and high velocity hollow points for hunting. I can attest to this demographic as I have tested a few and found them certainly built for purpose with a high degree of performance and consistency.

So it came as some surprise that they are now offering a dedicated round of 22 LR specifically aimed at semi-automatic firearms and it’s not what you might think! This came about according to RWS as their GECO 22 LR was not functioning 100% in self-loading systems. In the UK most shooters go for the highest velocity (HV) thinking that speeds = reliability, which is not always the case. To achieve this you have to sacrifice bullet weight, often with them being considerably lighter at around 36-38 grains. Yes you get the extra FPS but with less energy/back pressure to cycle the action.

I have found that standard velocity with a 40-grain pill is the most reliable and also the most accurate too, as HV does not necessarily mean tight groups. RWS seem to have taken this to heart with their new SEMI AUTO loading. It pushes a (quoted) 40-grain, round-nosed bullet with a wax lubricant in a standard brass case. For testing I ran it through my S&W M&P 15-22 with a 16” barrel and a Ruger 10-22 standard 18” model. Both guns very much representing the sporting and military look-a-like 22 semis we tend to use.

Reliability and performance were equally good. My Smith has a free-float barrel and tends to shoot sub-1” at 50-yards with most loads, with the RWS coming in at .78” (average). I regularly use it with sub-sonics on rabbits out to 100-yards and at this distance the SEMI AUTO was shooting sub 2” easily. The Ruger was perhaps not quite so tight but an easy 1” @ 50 and 2” @ 100 performer. Both guns ran smoothly with the Smith locking open each time the last round had fired, the Ruger has no such facility!

Taking a cross section of ammo apart proved interesting. Bullet weight is over the top with an average of 41.36-grains and an ES of 0.5-grains. The powder charge works out at 1.4-grains with an ES of 0.2-grains. However, it functions reliably in that most fussy of mechanisms a 22 Long Rifle semi-auto rifle, so no real complaints, certainly not at the price.