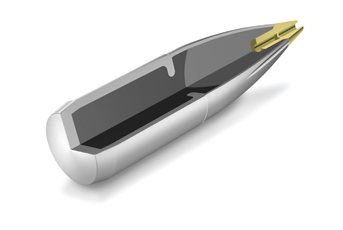 I don’t buy into all this lead-free bullet nonsense, which I feel is something that has been hoisted on us by the antis and the greens. However, and as ever, the gun industry bends over backwards to please the people who want to destroy it, so we have non-lead ammo and projectiles. To date the majority of this fodder uses a monolithic, copper-alloy build with either a hollow point or ballistic tip to initiate expansion. Tests with both ammo and bullets for reloading have shown that they do not shoot as accurately and given the nature of the build or expand as well as their lead-cored cousins. Plus they are far more velocity sensitive, reducing effective range.

LESS THAN ENTHUSIASTIC
So when RUAG sent me down a box of the latest RWS Evolution Green 308 Win I did not get too excited. However, the information suggested that this might be something a bit different! As opposed to a monolithic hollow point the Evo uses a cored build with a boat tailed ballistic tip. The jacket is nickel-plated with radial breaking cuts on the ogive (nose section) to give rapid mushrooming effect. Inside is a special tin core and what I would term as a semipartition build. As there’s an internal shelf that runs around the inside so partially separating the ogive from the main body and in so doing giving a fracture point or shear line.

Unusually the ballistic tip has a tiny hollow point (speed tip), which I first saw on the GECO Express ammo I used in Denmark last year. Apparently it gives maximum knock down power and stability at longer ranges - well it looks different. The tin core features what RWS calls “breaking points”, the illustration on the box shows them as cracks in the material. It’s almost like a sintered build but with a smaller number of larger apertures.

BREAKING UP IS EASY
The illustration on the box shows three stages of impact, 1 – the bullet hits and the nose splits up and mushrooms in the normal fashion, 2 – the nose then literally blows apart and sends a number of sub missiles into the body and organs, 3 – the rear of the bullet, which has broken at the fracture point stays together and penetrates further and maybe even exits the body. It sounds very effective and speaking to the GECO ammo technician in Denmark last year indicated that the smaller fragments do a lot more damage than you might think.

Unusually the bullet is quite light at only 136-grains, which is a symptom of the generic non-lead build, which is not so much restricted by weight but physical size. Given a hunting 308 Win usually uses a 150-grain entry level bullet I was a bit concerned about stability with the Evo.

I shot the Evo through my Ruger Scout Rifle, which I know favours 150-grain bullets over the heavier types. Its short 18.5” barrel can rob velocity easily, and with RWS quoting 2855 fps/2461 ft/lbs I was keen to see what the Scout would make of it.

At 100-yards off the bench the Evo was producing 1” groups, not bad with an x6 S&B scope on top. Recoil was mild too. Over the chrono it was giving an average of 2783 fps/2335 ft/lbs. RWS quotes 2855 fps/2461 ft/ lbs, so yes a noticeable difference but still good figures from a short barrel. I would say a normal 22” tube would be hitting the factory spec easily enough.

Regrettably testing used up all but four rounds and I took the Scout out that afternoon and did not see any deer to shoot. I would say the Evo Green is probably a bit on the frangible side so might cause more internal damage. However, I am certain it will expand as predicted, which is something other monolithic non-lead builds have problems with; certainly as the range increases and the speed drops off.

To be honest I am impressed with the Evolution Green and it’s only the second non-lead load that I would take hunting.

FOR: A non-lead bullet that seems to tick all the boxes
AGAINST: It might be a bit more destructive than you would like
VERDICT: The best nonlead alternative I have shot to date