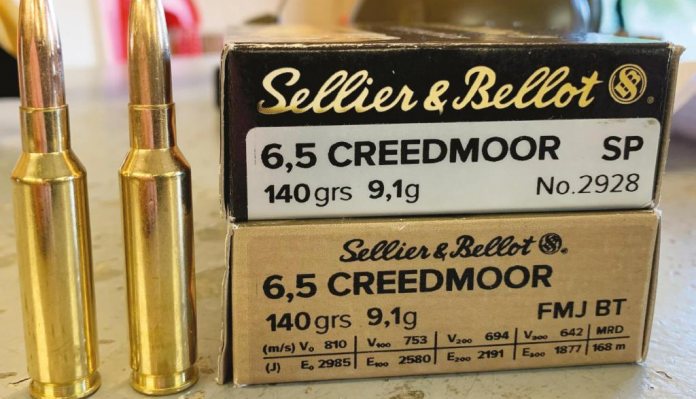 Sellier & Bellot (S&B) have been making ammo since the late 19TH Century but, like most companies, they’ve moved with the time, to offer a far more comprehensive range of munitions, not the least of which is the current ‘must have’ item; 6.5 Creedmoor.

It’s packaged in 20-round cardboard boxes with a plastic liner, ballistic information is printed on the outside in metric notation for speed (mps) and energy (joules) from 100 to 400m, plus gives their MRD (most recommended distance). I had been hearing good things about the SP from my game keeper, mainly it’s accuracy and hunting potential.

The build shows quite a long shank with a Spitzer-type ogive, but with a more rounded tip on both. The SP’s is large and reminds me of PPU’s Grom, it also shows a semi boat tail base, whereas the FMJ has a full boat tail configuration, it’s also longer at 1.235”, as opposed to 1.1975” of the SP. Cases are Boxer-primed, so good for reloading too.

PROOF OF THE PUDDING

Both loads were shot though my Bergara B14 HMR with its medium/heavy, 24” barrel and 1-8” twist rate at 100m as follows: S&B quotes both loads as doing 810 mps/2729 fps; so, as can be seen, they pleasingly exceed expectations, quite a change for a factory round in a real-time barrel. I could not get the ballistic coefficients, but the SP visually looks like Nosler’s 140-grain 6.5mm Partition, which quotes a figure of .490. I’m only spit-balling here, but something in the high 300 or low 400s might be of the order. Either round in the right rifle is going to please 6.5 Creedmoor owners, be it for hunting or target work and at really good money in today’s climate too!