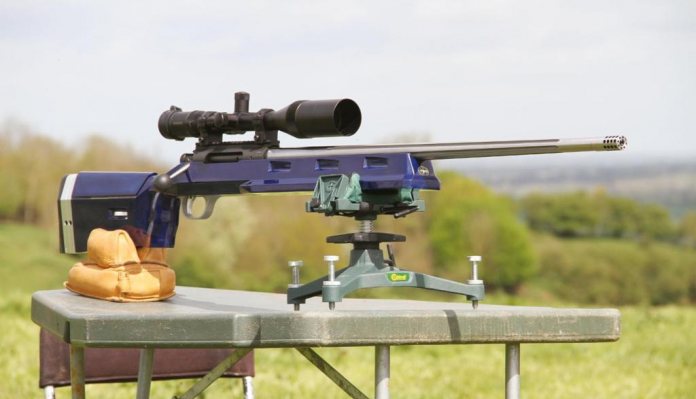 Nosler produce some of the best made and accurate bullets in the world, as well as catering for all hunting and target shooting needs. Over the years I have used their Ballistic Tip model to great effect, as well as the more controlled expansion Accu Tip types where needed. Their oldy but goody Partition set the benchmark back in the day, as an excellent, all-round dependable hunting bullet that is still viable today.

I like long range varmint hunting, as it tests your and the rifle/scope’s shooting skills, but most important is what you feed it. This is where reloading in the field using hand tools achieves some of the best and most accurate ammunition for your rifle. This is the part I really enjoy, fine tuning and making up loads that suit your rifle and it has become easier over time with the increased choice and quality of the bullets to reload. Nosler have introduced their new reduced drag factor (RDF) range, which are part of the Ultra High Ballistic Coefficient (BC) range. Designated for Match use does not affect performance/expansion downrange on rabbits, and significantly increases the chances of hitting one! They offer the following calibres/weights: .224” - 70, 77 & 85-grains, 6mm - 105 & 115-grains, 6.5mm - 130 & 140-grains, 7mm – 185-grain, .308” – 168, 175 & 220-grains and .338” – 300-grain.

The 6mm is an absolute jewel, as it’s exceptionally well executed and finished. Weighing ten showed an average of 105.5-grains with a length of 1.25” and diameter of 0.2425”. Being a boat tail design, they differ in length per calibre, the 6mm’s was 0.187”, which certainly helps reduce drag in flight. Therefore, shoots flatter and is more stable.

Common to the RDFs is the bearing surface to secant/tangent ogive. The 6mm’s is 0.465” with 0.585” long ogive to tip. This is termed the optimised compound ogive, which means really it is a blend of both secant to seat more stably and the tangent section maximises the BC or aerodynamics.

This gives the excellent BC values that makes it very wind slippery, the whole reason for the RDF range to start with. G1 or G7 figures are given, but for better and more accurate trajectory readings down range I would certainly use G7, as this achieves a far better standard form, to achieve the Nosler’s individual bullet BC value.

You have a very neat and tidy meplat (bullet tip form), again greatly enhancing the BC and where the copper jacket meets at the tip, the hollow point, although small, is perfectly formed. In section below, you can see the uniform hollow point void. It’s a Match grade, built not to expand but as we all know it has other uses.

Yes, primarily used for extended range target work, but for vermin at long range, which is my normal use, the Match nature of the bullets means less wind drift and fl atter trajectories, energy is of no concern as even at extreme range either type is lethal on a rabbit.

Running through Quickload and Quicktarget helps get the reloading rolling for fi ne tuning in the fi eld after, 6mm loadings were conducted using the RPA 6mm BR barrel, 6mmx47 Swiss Match and 6mm Rem Ackley.

You can see that forgetting about energy fi gures the 6mm and 30 cal bullets are not to dissimilar with drop or wind drift in reality at 500 yards and the 6mm cartridges burn less powder and are more recoil-friendly. At 1000 yards, the 30 cals have a nice advantage with less drop and wind drift in the cartridges tested. You can push the 6mm faster in a 6mm-284 but then it’s the age old problem of fast moving smaller calibres burning out barrels quicker. Nosler RDFs have proved to be a really effi cient design and shoot consistently and accurately.