Wildcatting: Sting in the Tail 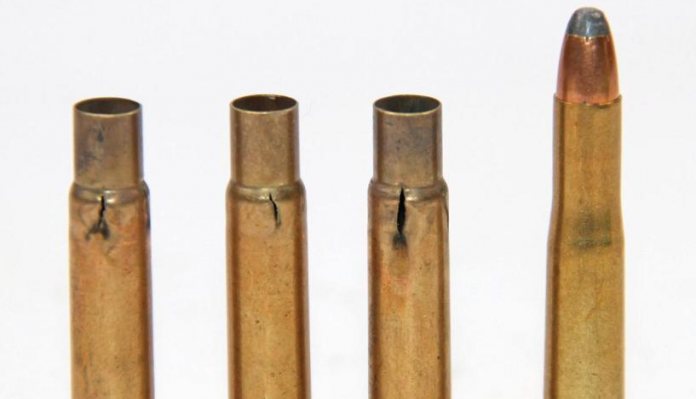 The 22 Hornet is one of those lovely, old and evocative cartridges that still has a loyal following today. Despite its outdated appearance and mild manners, it is still a very capable round for British vermin and foxes. It is often overlooked for the bigger 22 centrefires like the 222 Rem or 223 Rem and people who have a vermin problem are often just happy to own or shoot a 17 HMR or 22 WMR. That’s a shame, as the 22 Hornet family is better than the HMR and nearly as good as the 22 centrefires at the ranges that most people actually shoot vermin at.

The Hornet was first chambered by Winchester in 1930, but its lineage can be traced way back to 1885, when the same case dimensions were charged with 13-grains of black powder and a 45-grain lead bullet and called the .22 W.C.F. (Winchester Centre Fire). This round was capable of a moderate 1600 fps with its original BP load, but smokeless powder changed all that, as it made the transition to the new fuel.

It was the Germans who starting using the new powder and named the .22 W.CF. the 5.6x35R (rimmed) with subsequent velocity gains from 1600 to 2600fps with the same 45-grain bullet; crikey! This launched this little round into the mainstream shooters vision, as it now offered a viable, small, economical and relatively quiet vermin round that was frugal on powder consumption. Plus, it can be easily reloaded to match your quarry.

However, as with everything, there are those out there that just have to tinker and soon the Hornet was being necked up and down and improved left, right and centre. Probably the best known is the K Hornet, which has been itself tinkered with and altered and it is really difficult to establish its true origins. However, the K Hornet is attributed to Lysle Kilbourn in about 1940, others like Newton, Neidner, Ackley and Lovell all had their versions but it’s the K version that’s the most remembered.

The 22 Hornet has many improved forms; this, the K version, has an overall length of 1.723” with a classic Hornet rim of 0.350”. There is a 350 shoulder angle that starts at 1.151” up the case body and stops at 1.180”, so very short and sharp. You have a neck length of 0.345” and outside diameter of 0.240”. Compared to a standard Hornet case, it is very improved and far superior in capacity, although I would be tempted, as with my 14 and 17 Hornets, to anneal the case necks for longevity. Working pressure is 44000 psi, the same as the standard version.

Also, remember that dedicated chambered Hornet rifles will have a 0.222” diameter bore, whilst some custom guns have a more normal 22 centrefire calibre of 0.224”. I used a Weihrauch HW60J model, which had been re-barrelled before with a .22-250 Rem tube, that had been set back and then rechambered to Hornet, but using a Hornet-dedicated action, so that the extractor and magazine work correctly. In fact, it’s an excellent way to re-barrel a perfectly good bore, that might have some throat erosion from a bigger cartridge. The tube was a tad short at 19”, but still the accuracy and velocities were very good.

Having spoken to many people about the K Hornet, they say just shoot the standard version in the new chamber and bingo, one improved and fi re-formed case. Sadly, this is not always how it goes! As you have to work out a case prep procedure that suits your brand of brass and chamber dimensions. I tried Winchester, Remington and RWS factory ammo through the Weihrauch. Guess what, all split cases and low velocities. Some of them were badly damaged from this process too, the moral: don’t take it as read if you have not shot it yourself!

This is the procedure that works for me and, although a bit more involved, achieves 100% success to the new dimensions. I have a stash of RWS Hornet brass left over from the 17 AK and .14 Walker Hornets. It is excellent material, consistent and annealed at the shoulder and neck, which certainly helps fi reforming. The RWS is 1.3880” long with a 0.064” rim and neck diameter of 0.240” and neck wall thickness of 0.010” or 10 thou in old money, with a shoulder angle of a scant 50. However, load it even with a reduced charge and it splits, the dimensional change is too great in the K Hornet chamber.

So, the first step is to weight-sort your brass, which eliminates any weight variations to the cases. These RWSs weigh 57.8-grains and have a H2O capacity of 13.4-grains and overall length is 1.723”. Next, you need to expand the neck, to 6mm or 0.243”; seriously, using a long tapered expander mandrel such as the Sinclair or K&M. This removes the worst of that long and Hornet-like tapered shoulder angle. You now have an outside neck diameter of 0.258” with a near straight case wall and slight shoulder at 0.410” from the mouth.

Then, you need to pass it through the 22 K Hornet, full length sizing die. Norman Clarks Gunsmith supplied a Redding die set 80362 type B and uses a #14 shell holder, which are really good quality. Lube up with Imperial Sizing Wax and pass straight through the full length die and now you have a case with an odd double shoulder at 0.410 and 0.220” which is where the new neck will start for the K Hornet form.

With a tapered or boat tail bullet, they will slip down the neck fine when reloaded, but a flat based type requires the neck just expanded to 0.223” for ease of insertion, which then and gives 0.001” neck tension. Now comes the fun part, fi re-forming to make the new case. I used a Nosler 40-grain Ballistic Tip bullet, a Federal Match small primer and a charge of 10-grains of Hodgdon Lil`Gun. This achieved the desired effect of forming that lovely new 350 shoulder angle and minimal case taper. Now the case capacity has increased from 13.4 to 16.75-grains of H20, very nice; remember it’s a small case and 0.5-grain makes a big difference. With a bullet seated, it will be about 13-grains max loadable. Using this method, you will not lose any precious brass.

As with all small capacity rounds like this, with thin wall thicknesses, you have to tread gently. A small change in charge weight can exponentially send the pressures skywards. So, always work up slowly and watch for pressure signs. A good small funnel to swirl the powder in the neck is advisable to pack it in, as compression can occur. I used the Quickload ballistic program, as usual, to get things started, to see if I was on the right track and it saves time and loads that won’t work out. The shorter barrel, although excellent with a moderator fitted for overall length, fell a bit short on some velocities, as an extra 4” will increase velocity by 150 fps.

Pigeonholing the Hornet has always been an issue, as it’s not as powerful as say a 223 Rem, but better than a 17 HMR. Its reloadable but ammo can be expensive. Then again, reloading is simple and rewarding and at the normal ranges vermin or foxes are encountered its mild nature of noise when suppressed and lack of recoil to spot the shot is very impressive. The K Hornet version, in my opinion, is one step up again and offers a really nice, unusual but very useable wildcat for also most vermin duties around the farm, being frugal on powder for low velocity rabbit loads to flat shooting, lightweight fox rounds.