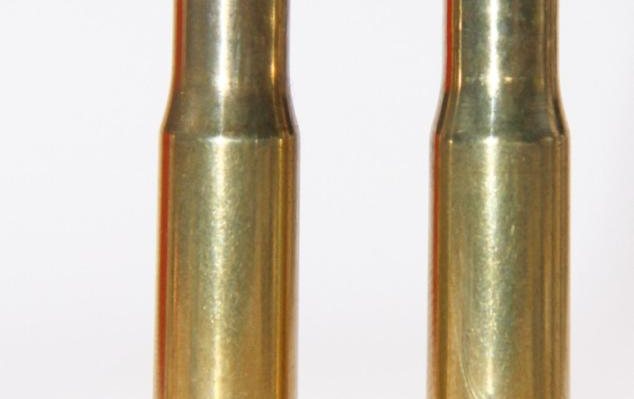 Blimey here`s a golden oldie! It’s a bit like me now; slow, outdated but gets there in the end… The 30-30 Winchester is such an iconic cartridge, especially to the Americans; they would have nothing bad to say against it. To we Brits, its rimmed case and inefficient, longer tapered long neck is not quite up to modern day ballistic ethos or design. However, this old 30 cal has probably put more deer on the table than any other round, and I can believe it.

Like so many of these cartridges we are testing from the past, at the time it was the bee’s knees and the deer could not care less if it has an odd shape, it still hurts! However, when you start to delve into the real ballistics of the 30-30, you soon realise that actually it’s plenty lethal for any deer species in Britain with the correct load. I was reminded of this on a trip to Slovakia with a friend who shot a red and roe deer with the old thumper.

Developed back in 1895 by Winchester, for the use in the very popular ranch rifles or lever-action guns for hunters who needed a lightweight, dependable and fast handling gun and calibre capable of realistic ‘walk them up and shoot them’ ranges to 150 yards. This meant rifles like the good old Winchester 94, unsurprisingly and Marlin’s Mod 336, which I prefer. You also had some bolt-action designs, and, in Europe, some combination guns had the bottom barrel chambered in this dependable 30 cal. Doubtless its rimmed design fitted in with this sort of mechanism.

I actually like the 30-30, I had a barrel in this calibre for my old Contender pistol and carbine and it shot superbly for a 14” tube. Commonly, the carbines used for the 30-30 matched its ballistics well, increasing the barrel length in say a bolt-action only achieved about a 20-30 fps increase per inch.

In a lever-action rifle’s tube magazine, that stacks the ammo tip-to-primer, negates the use of ballistically superior pointed point types bullets is a no, no! This is because recoil can cause a chain detonation; so, flat-nose or similar was the only way to go. However, with the introduction of Hornady LeverEvolution Flex Tip (polymer-nosed) bullets have sorted that and also upped ballistics a little. However, the flat nose design works incredibly well and ensures deep penetration and plenty of energy transfer, without too much venison spoilage.

Typically, a 150-grain bullet will produce 2300 fps/1762 ft/lbs, so bang on, large deer legal in England but shy of the Scottish velocity law. Powder choice is simple with medium burn rates for 24” barrels and slightly faster for the lighter bullets and shorter tubes. Bullet choice is easy, as non-pointed and Flex Tip loads offer a good range of weights. Traditionally, the round or flat nosed 170-grainers work extremely well at 30-30 velocities but are the limit of stability in a 1 in 12” twist rate.

Working up a good reload for your own 30-30 will yield better results, as you know when to back off the powder when signs of pressure appear. Lever-actions are not as strong as bolt-guns, so take care, some of my Contender carbine loads had to be tempered a bit too! Also, it is really important to full-length size every case, as the lever-action design does not have the camming action of primary case extraction as does a bolt-gun and neck sizing only can lead to sticky cases. As usual, Quick load and QuickTarget are superb aids in getting you started and working up excellent loads for your gun and barrel length etc. Data was gathered using a 24” barrel, although the more common length seems to be 20”. See Light Bullets and Heavy Bullets.

I tell you this, full-length sized from Redding dies, those reloads flew through the test gun and offer a really quick second shot. A friend in Slovakia uses the Marlin for driven wild boar days and I can see why. He fitted a Delta Optics Classic scope and it shot like a dream. The light bullets were really fun, offering easy recoil too. Sierra’s 85-grainers shot nice 1.0-1.5” groups at 2933 fps/1623 ft/lbs so good for small species deer or vermin. Best were the Hornady XTP as they expanded well, and the best load was the 35-grains of RL10X for 2977 fps/1771 ft/ lbs and about MOA.

Sub-sonicing these bullets is fun, as they still expand well and so a load of 5-grains of IMR Trailboss gives 1091 fps/238 ft/lbs; where’s my moderator! A light practice load would be 14-grains of Vihtavuori Tinstar. Speer 130-grain hollow point is a flat-nosed build, but even still I only loaded one in the chamber and one in the magazine, just in case. Nice bullet but take care.

I only had a handful of 150-grain RN bullets, which shoot very well, but the new Hornady Flex points really surprised me. They come in two cannelure types; #30395 has a high ring so deeper seating and #30396 offers the standard height. The former achieved good accuracy, but I could not really find a burn rate it liked to achieve 1750 ft/lbs energy and stay safely in pressure. The latter on the other hand achieved the best results and accuracy. Best load was 33-grains of Swiss RS 52 for 2249 fps/1796 ft/lbs and sub-MOA, 3-shot groups.

These results and having shot the old 30-30 again just reconfirms to me that with all today’s modern advances, maybe, a good cartridge is still a good cartridge. The results speak for themselves, practical accuracy at the ranges most of us hunt at is acceptable and if a 170-grain Partition harvests both Red and Roe in the field with complete pass throughs, ballistics speak volumes too.

I don’t really like lever-action guns, but it got me thinking a bit more about a barrel for the Contender; trouble is, it would have to be long enough to be deer legal for most uses or a bolt action?