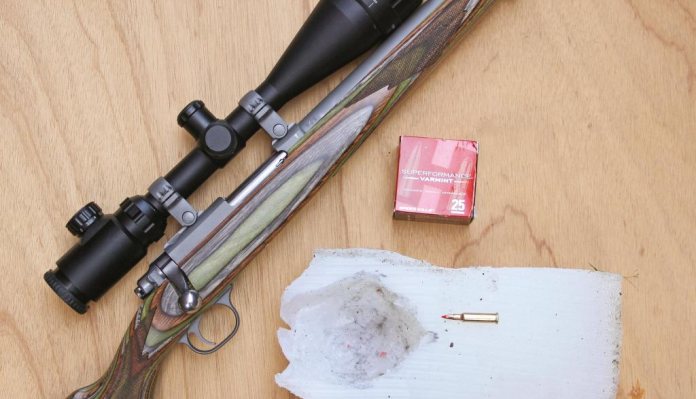 Vermin cartridges really interest me, as they are the most accessible and probably the most widely used calibres available to the normal shooter that enjoys small critter or fox shooting. There is no denying the venerable, rimfire .22 Long Rifle (LR) is top of the list in that respect, being able to cross the boundaries of all small vermin species with good accuracy, low noise and recoil with enough energy to get the job done.

However, as with all things, one likes to improve the status quo and it is no surprise that the .22 LR was improved into the .22 WMR (Winchester Magnum Rimfire) with a considerable increase in performance from 1100 to 1900fps with a 40-grain bullet. However, WMR never really caught on, probably due to lack of really good quality ammunition. But, one improvement that did, was the invention of the 17 HMR round.

Based on a necked down .22 WMR, it has proved so popular as an accurate and fast expanding round with a flat trajectory. However, things never stay the same, and in turn, the .17 HMR needed to be improved upon, hence the .17 Hornet and the even newer 17 WSM (Winchester Super Magnum). Here is a guide to actual ballistic comparisons between the .17 HMR, .17 Hornet and .22 Hornet cartridges, regarding down-range velocity, energy, wind drift and actual penetration into ballistic wax.

By comparison, the .17 Hornet cartridge is a centrefire round and can be reloaded, which is part of its appeal, because you can load rounds to suit you, your rifle and the game you hunt. It is also a lot larger case; so, offers an overall higher velocity. But don’t forget, it goes the other way too and you can down-load for shorter distance or quieter use, which is why I always prefer a centrefire case form I can reload.

I had factory 20 grain V-Max loads of 3601 fps for 576 ft/lbs energy, whilst I reloaded some heavier 25-grain Hornady Hollow Point bullets to 3211 fps and 573 ft/ lbs energy. I shot them over a chronograph to gain data from the muzzle and then entered the data into Quickload Ballistics program, to determine down-range performance. I also shot them into ballistic wax, to determine actual performance on target, to get an idea of the 17 Hornet’s real ability. Rifles used were the Ruger M77/17 Hornet and Ruger Custom 17 HMR, although I did use a Savage Mod 25 17 Hornet for some fox control as a field test.

I love my original .17 Hornet Ackley Improved, built on Sako Mod 78 by the Venom boys. This was one of PO Ackley’s great wildcats and, sure enough, it took many decades, but it was soon legitimised as a factory round by Hornady, as so many good wildcats do. It’s very well suited to the British type of vermin, offering flat-shooting, accurate and hard-hitting loads that, as I said, have the real benefit of being able to be reloaded to your own spec regards bullet type for feather or fur at the velocity, high or reduced, as you see fit.

At the moment, you are a bit limited on 17 Hornet rifles for this calibre, as compared to the 17HMR; Ruger, CZ, Anschutz and Savage being the only real answer at the moment; although it’s easy to re-barrel an existing 22 Hornet, as everything else stays the same.

The .17 HMR rimfire has a unique niche in the British market but the extra oomph of the .17 Hornet makes it a deadlier fox round, where a .17 HMR at extended ranges can be marginal. Most vermin are shot at below 100 yards and so the .22 LR is still very popular.

However, the HMR flattens the trajectory and when zeroed at 100 yards has almost a flat trajectory out to this range and is still viable at 200 given the wind.

.17s, however, are safe, as the bullets at the speeds they travel are more frangible than any .22 LR lead pill, which has a notorious ricochet reputation. If you shoot past 100 yards on foxes, or longer range crows, then the Hornet really comes into its own, with better down-range ballistics, for a surer shot and deadlier results.

More important, is wind drift; this will cause a miss at range and it does not matter how good the cartridge is if you cannot read the wind. Again, and unsurprisingly, the Hornet has a far superior ability to buck the blasts compared to the HMR. With a constant 10mph wind coming from 3 or 9 O’clock to your HMR’s 20-grain Game Point bullet drifts -14.2” compared to the Hornet 20-grain V-MAX at -5.8”.

This is all well and good, but you need to hit the target and it’s bullet performance and terminal ballistics that make the difference in the sporting world. You need penetration but also allow energy transfer without too much expansion, so that it explodes on the outer skin and not too much over penetration as it whistles on through, with little energy transfer. You can imagine then that penetration differs widely between the HMR and Hornet and will influence the end use of each round.

The Hornet loads have a massive increase in wound channel volume compared to an equivalent weight HMR, velocity here makes a big difference. Both Hornady’s 20-grain V-MAX and 25-grain Hollow Point were quite similar in the ballistic putty tests. Both penetrated nearly the same, 4.5 and 5.0” respectively, with wound channel width at max of 3.5 and 2.75” maximum. The volume was similar at 264mls for the V-MAX and 251 mls for the Hollow Point, although more of the 25-grainer remained at 9.1-grains, as opposed to the 2.2 grains from the 20-grain, but both were shrapnel.

Look at the difference in wound channel volumes between the Hornet and HMR bullets, as this is where the extra performance of the former shows, nearly quadruple the size and all energy dumped within 5.0” of penetration.

Hand on heart, the .17 HMR is your best bet for shorter range vermin, but for people like me, who like to reload and just enjoy the performance, even with factory ammunition, the .17 Hornet is a realistic, longer-range vermin tool that delivers great performance down-range.

Personally speaking, I wish the industry would produce a factory .20 HMR and .20 Hornet, as this would blend heavier and more streamline bullets with potentially better ballistic coefficients (BCs). Remington had their 5mm Rem Mag that was a rimfire 20 cal that I am sure influenced the 17 HMR innovations. Surely it can’t be that difficult to expand the neck of the HMR case and it would reduce pressure too, which has become an issue with some makes in this calibre. But, one should not forget the venerable old .22 LR that is still the number one vermin tool and the old .22 Hornet still has a sting in its tail. The new 17WSM round might be the next best thing and that’s what I am going to have look at next time.