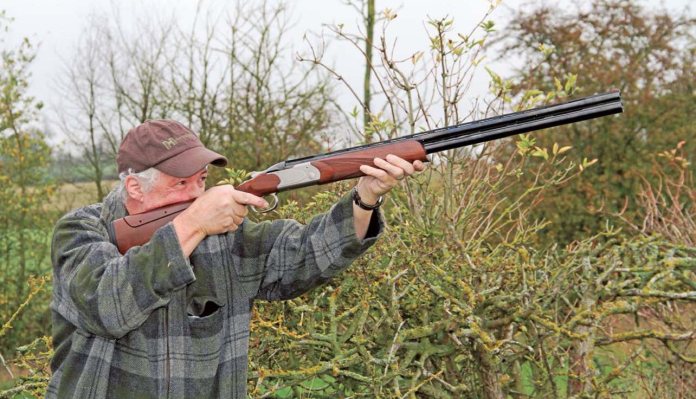 Coating or plating a shotgun’s soft lead pellets is nothing new; it’s a technique that has been used for decades by manufacturers. Trouble is that it’s expensive and adds to the price of the ammunition which is why regular lead shot is widely used. However, with so much eco-friendly awareness today, coating a toxic lead pellet with a more inert substance has its benefits for the environment and the shooter also. Some manufacturers are now coating their .22 rimfire ammunition in polymer for the same reason.

However, the real reason, or should I say the primary reason shotgun pellets are coated is that it increases their structural integrity, and this translates to a better performance down range.

Some manufacturer’s use copper as a coating, some use nickel and even graphite, but all serve the purpose of giving greater range and striking energy to ensure those long clay birds break or game is taken clean at distance.

Also, the coating is designed to give a far better distribution of shot for better coverage over the whole pattern without clumping or shot associated with standard lead pellets. This is because coated lead spheres are less likely to deform and, thus, patterns are superior and down range performance and terminal ballistics are improved also.

But the reality of coating is only as good as the hardness of the lead pellet beneath, which is why manufacturers will often up the antimony percentage of their lead shot to, say, 5% for added strength. It is designed to stop clumps of pellets binding together as pure lead shot does, which is always evident when test shooting on the pattern boards where two or three holes are fused together Coated pellet cartridges are designed to use hard shot for better density, but nickel plating to maintain individual shot down range for a very consistent and even pattern, not necessarily tighter.

Here are some of the more common cartridges available today.

Hull make a habit of producing cartridges that shooters want just at the right time. The very striking purple box of their new Driven Grouse cartridges are incredibly consistent in manufacture and performance and hold the Royal Warrant too.

This is a new copperplated shot loading that is designed for better penetration down range and to provide uniform and consistent patterns due to the lack of deformation of the shot that now has a harder surface area by the electroplating process.

Available in 65mm cases but only fibre wadding, you have a choice of No 5.5, 6 or 6.5 shot sizes in differing loads of 28- or 30-grams. Ideally suited not only for grouse but partridge too and early season birds, with the smaller 6.5mm shot size being a great choice here.

I had the 70mm seethrough case with fibre wadding and a payload of 30-grams of No 5.5 copper shot with a high 12mm rim. I like the No 5.5 shot size as it hits a little harder than a No 6 but has more pellets total than a payload of No 5.

The patterns were indeed very well-distributed and even, as the pattern boards proved. A total of 214 pellet strikes within 30-inches at 30-yards on ½ choke with a near even split between the inner and outer sectors. The inner having 109 copper pellets within and the outer having 105 pellets distributed.

That to me proves the merit of the copper shot for even pellet distribution and excellent patterning.

The Eley Titanium range come in plated and nonplated versions. This version, Titanium Strike has a hard nickel coating that is designed to give a far better distribution of shot for a more even coverage over the whole pattern range, without the clumping of shot that can happen when normal lead pellets pass down the barrel and through the choke.

Only the Titanium Strike version has the plastic wadding choice, but it does have an improved, larger 25mm nickel-plated case head. Importantly, it too uses the same 5% antimony lead magnum shot of the standard Titanium loadings, but the Strike’s payload is nickel-plated.

I had the Titanium Strike No 7.5 shot size 28-gram load in plastic wad only. 24-gram loads are also available but only No 7.5 shot size. The Eley Titanium Strike plastic wadded load No 7.5 shot size with a 28- gram payload equates to about 350 total pellets per cartridge in total. That’s interesting as the carton states 2.4 and 2.3mm size for the 7.5 and 8 shot size, respectively, which is larger than normal and thus less pellets per charge. I tried these with a ½ and full choke to see the difference on the boards.

Fitted with the ½ choke tube I had a total of 234 No 7.5 shot hit the 30- inch pattern board. This comprised of a distribution of shot with 133 outer strikes and 101 inner hits to the 15-inches. You could clearly see no clumping of shot and overall good distribution. Fitted with the full choke tube I had an increase in pellet hits, as expected, that rose to 298 total strikes, 64 more than the ½ choke. Here I had 185 of the No 7.5 shot hit the outer regions, again very well distributed without clumping of shot showing the nickel coating was doing its job. In the inner 15-inches I had 113 strikes with good density and evenly distributed.

I really like the NSI range for cartridges as, although not so well known here in Britain, this Italian cartridge maker produces some excellent cartridges and a great a variety too. Take this Quattro Flou cartridge with a high 23mm nickel case head and bright orange Flou casing and perfect six star crimp closure for example. You have a choice of 7¼, 7½ or 8 shot sizes (never seen 7¼ before), and all load as a 28-gram load. The lead shot is a 4% antimony for hardness and regularity and has a silver-coloured graphite coating to ensure positive energy transfer to the target, that’s both clay or game at extended ranges too. This is designed as a competitive round to deliver peak performance, yet still be soft on the shoulder after many rounds fired. It is loaded with the Nobel Sport Vectan 206 powder, and the innovative NSI 2-piece wad system ensures a high velocity yet less recoil.

This is because the internal damper effect of this wadding is such that it absorbs part of the energy produced by the cartridge on firing, smoothing the recoil so there is less muzzle flip. This allows a continued swing on target for a quick second shot.

Tested were the 28-gram loading with No 7½ coated pellets This cartridge looks impressive and shot equally well too. The 28-gram weight of the smaller No 7.5 pellets resulted in a total of 312 pellet strikes split up into 143 inner hits and 169 outer hits for a dense overall pattern that few clays would ever get through. It was low recoiling, and you did feel that difference when shooting a similar shot size and weight from another cartridge. This would mean a faster second shot, and it functions well through the semi autos too.

This is another copperplated round made by Eley that has made a big impact, literally, in the game shooting world. Eley cartridges are well-made and these Zenith loads take that to a new level of performance. They have 70mm or 2¾-inch cases and fibre wad and has a 32-gram shot load.

Although you can also have a 30-gram load with fibre wad and No 5 or 6 shot or whopping 36-gram load again with fibre, there are No 4 or 5 shot sizes. It also has a high rim case design of 16mm for improved ballistics and the seethrough green case shows off the copper shot well.

This time we had a full choked Chapuis shotgun side-by-side in keeping with the game gun ethos, and it proved a real performer on the pattern boards. I had 221 of the No 5 shot from the 32-gram load hit the board with 68 hits to the inner circle and 153 to the outer circumference, so a good, well-place load with even patterns. Love this load, pricey but very good performance.

Eley also make the Classic Game cartridge (£418 per 1000), which is a classic 2½-inch paper case but loaded with 30-grams of copper-plated lead shot. Aimed at the side-by-side shotgun user who only has a 2½-inch chambered gun but wants the new performance.

In the Chapuis on full choke, at 30-yards I had a very tight pattern with 48 No 6 shot pellet size hit and the rest, 204 pellets were concentrated high right for a total of 252 pellets.

Copper-plated shotgun ammunition is here to, as it does produce the goods – tighter and more even patterns without clumping of shot. Yes, a bit more expensive than standard shot but its impact is noticeable on clays or game.

F A Andersons shotguns and cartridges: