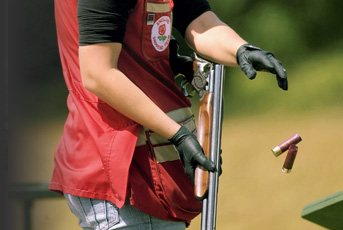 Enjoyable and social as it is, clay shooting isn’t the cheapest of hobbies, but there are ways of reducing costs, one of them being cartridge selection. Choosing wisely, purchasing in bulk and splitting the cost could save £30 to £100.

To be honest most club level shooters usually can’t tell the difference between expensive or cheap cartridges. When it comes to budget ammo, loyalty to a brand or type is rare, price being the overriding factor. Don’t believe me? Then find a friend who’s an average shot, pick a target they can consistently hit and load their gun so they can’t see what’s in it and watch them shoot. Do this with a selection of, premium, mid and budget cartridges and the chances are they won’t have much of a clue as to the supposed quality or cost of the individual ammo.

They All Do One

What most shooters fail to realise is that most of the top manufacturers produce an inexpensive range of 28-gram cartridges that either carries their own name or an alternative brand. Apart from the fact it helps to set them apart such as Kent Velocity by Gamebore, Lyalvale Express’ D&J and English Sporter, Hull produce the Comp – X whilst Eley have their Firsts. Alternatively there’s the reduced load route, 24 or 21-gram ammo inherently less expensive since each round contains fewer pellets. Do remember though the exceptions to this rule are the Olympic discipline 24-gram loads, these ultra – high performance cartridges usually costing top money.

Before we go onto look at the actual facts and figures of many of the economical loads its worthwhile taking a close look at what exactly separates the bands that competitive ammunition falls into. Taking two of the biggest names in the game as prime examples it’s as much down to production as it is components as to why they can offer certain cartridges at prices significantly less than others, a fact highlighted by Paul James from Gamebore.

“Where we manufacturer our top lines such as Black Gold as and when required, our dedicated Kent Velocity production never ceases, so the more of them we produce the lower the overall costs. Similarly the transparent short brass Kent Velocity case costs less than half that of our premium deep brass hulls although the actual propellants and wadding be it plastic or fibre is more or less the same - a fact borne out by the Kent Velocity performance figures. The most noticeable difference is that the Kent doesn’t incorporate our highly polished, self -lubricating Diamond Shot, something that’s still kept exclusively for our premier competition loads”

Producing a slightly larger range of economical loads Lyalvale Express employ a different approach though still arrive with the same type of product. Marcus Iddon, Area Manager, and a chap with a significant input into development explained the route Express take with their D&J and English Sporter loads.

“The main difference between the two budget-orientated loads and our top of the range Supremes is the quality of case, a standard primer combined with a lesser quality wad and coarser propellants. Similarly, we tend not to grade the shot to quite the same degree, although we still ensure no malformed pellets make it through, our quality systems still as rigid as with the top of the range. That said, all the batches are tested to ensure uniformity and performance, the end user guaranteed each D&J or English Sporter will shoot exactly as the last one. For most shooters the difference between our premium and budget loads is negligible only the very top international level shooters are able to perceive a difference”.

One aspect both Paul and Marcus are agreed on is the style of the cases. One of the major visual aspects of a cartridge that tends to immediately separate the cheaper from the more expensive is its appearance. Apart from the fact that certain premium makes use a thicker plastic and more ornate printing it tends to be deeper brass that sets them apart.

Whilst deep brass has the effect of generating a crisper shot and enhancing performance, the popular misconception is that it improves the extraction of the empty. In fact it’s the short brass that extracts easier as most shotgun ejector systems prefer this style. Let’s face it, it’s what happens 30-yards out that matters and not what your ammo looks like. So quality control is of primary importance to give consistent ammunition.

The carrying of different shot sizes or sticking just to the one such as 7½’s is a personal decision. However, with budget ammo this decision is usually made for you! However,

It’s often worth carrying a box of absolute stormers such as Express Supremes, Gamebore Black Gold, Eley VIP’s or Hull Sovereigns Extreme FITASC for those occasional 40-yard plus birds. Although they may well be a pound or so a box more expensive they can add that definite extra edge, but reserve them for the most distant targets.

If time and money permit a short session on a patterning plate will more than pay long – term dividends. No two guns shoot the same and will often prefer one make over another! To that end, by keeping the same distance from the plate, usually about 30-yards and with the same chokes, aim a fraction beneath the centre and shoot a few of each load. By examining the resultant pattern and pellet distribution you can then determine which cartridge suits your shotgun the best. You may even find that one of the more economical loads out performs your current expensive shell.

Many of the cheaper loads sell well when introduced because of the manufacturer’s claims, something many of the lesser known brands are guilty of. Yes, they’ll have produced a round that offers phenomenal performance, is cheap to buy and is the answer to every shooter’s prayers. Downside is many of the lesser known, ‘hell fire’ type cartridges tend to blow their patterns after 20-yards to a degree that consistent, uniform pellet distribution verges on the non existent. Once again, try them on the pattern plate if time permits.

Below is a small selection of the current crop of economically orientated, competition cartridges. Far from being a definitive and certainly not a list of recommended loads, what each one offers is a combination of quality and performance that will adequately serve both the average and county-level clay shooter, especially if you’re honest enough to describe your performance as average. Whilst observed velocities are none too different, its only the pellet distribution that tends to separate them, a physical aspect that once again most Sunday morning clay breakers will be unable to detect.

Lastly, it’s always worth bearing in mind ‘own brand’ cartridges such as the CSP range by wholesale suppliers ‘Just Cartridges’. Produced by one or other of the big manufactures, in this case Express but branded with their own name, by virtue of the fact its actually free advertising, many outlets retail these as their own budget load often saving the shooter a few more pence per box, once again adding up to a few more vital pounds in pockets.

So apart from exploding a few cartridge myths there you are, the reasons for buying the best and most expensive on all but the most important occasions now explained. Apart from that, go get yourself some economical shotgun ammo and enjoy yourself whilst saving a few quid in the process.