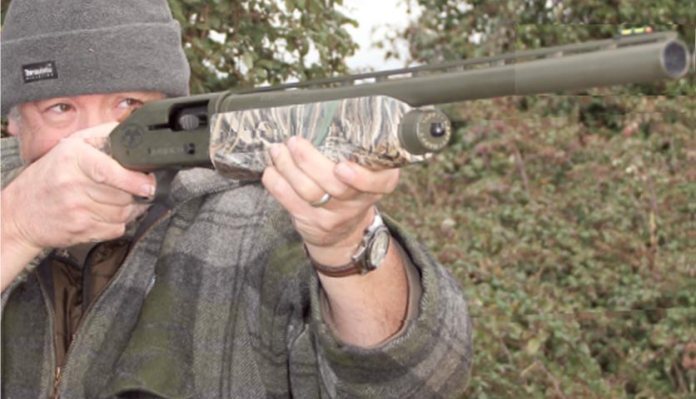 I have never been keen on shooting anything larger than a goose with a shotgun, especially foxes where a rifle is always best. However, it’s neither always practical or wise to hunt with two rifles just in case, which is why shooters, keepers and estate owners have relied on a loading of bigger balls for foxy in a smooth bore gun. A pocketful of suitably loaded cartridges is always worth having where a fox may break the beater’s line, or be flushed on a rough shoot, or just chanced upon whilst pigeon shooting.

Stalking foxes with buckshot is always very exciting, as it requires very good field craft skills and often long periods of waiting, keeping still usually involving a cramped, cold and wet position! Trouble is, which size of shot is best and what is the effective range and how do chokes affect the patterning? All good questions; here’s my take on it all.

I don’t doubt that a normal sized payload of No6s have yielded their fair share of foxes over the years but at very close range, but at any distance then it’s a definite no-no in my view. There are many good choices of specific cartridges for old Charlie and a box won’t set you back too much and are far more effective and humane. I used my usual one stop cartridge supplier, Just Cartridges in Northmoor, Oxfordshire. They had all I needed; in fact, more, so I settled on a selection of Eley and Game Bore loads, with others and variations for a follow up article.

I remember using these in paper cases on my Uncle’s farm in Kent, loaded with BB for flighting geese when I was a teenager. They have been the ‘go to’ heavy hitter cartridge for decades and in 2¾-inch, upping the load and size to three-inches these Alphamax plus loads were my choice in BB shot size again but I only had the No 3 shot, 3.3mm diameter, 3.1-grains each, load and would show a good comparison.

This is a very good consistent load, with a high brass head and red plastic case and wad. I had the 36-gram load of BBs, which is good for fox. It has a total of 96 pellets (equates to 38-grams) weighing 6.17-grains for a velocity of 925fps and 11.7ft/ lbs energy each at 25-yards.

Another plastic cased and wadded load but this time with AAA shot size (5.2mm diameter) as a 32-gram payload, which is 40 pellets at 12.3-grains each. Here you have a 950fps velocity for 24.7ft/lbs energy per pellet and is a good blend between large and smaller shot sizes.

Largest of the shot size tested and with a fibre wadding, clear case and a shot weight of 32-grams, translating into nine pellets. Each weighing a whopping 54-grains and 8.4mm diameter at 1050fps is 132ft/lbs energy each at the 25-yard pattern board.

First up, I tested the loads with a Mossberg Duck Commander in 12-gauge and I fitted a full choke to get as dense a pattern as I could. That’s fine but with some of the bigger pellets tighter chokes can cause unnecessary rubbing/contact of the pellets for deformation and thus spread a pattern or cause the odd flier, which did happen. But that’s the test for next time, using differing chokes and buckshot to see where the optimum is.

I also set up the pattern boards at 25-yards, which is a normal distance for stalking or calling in or have a fox run out at you. I only used the Mossberg Duck Commander’s Day Glo front sight but it still shot perfectly to point at aim – very impressive!

Blimey, talk about a dense pattern! Full choke on the Duck Commander’s barrel really shot a superbly dense and even pattern at 25-yards. I had a 25x 21-inch diameter pattern with a total of 240 pellet hits. Of these from the aiming mark on the fox’s chest, the Eley Alphamax shot 152 pellets in the front kill zone and 88 in the rear section. There were only 63 misses. Excellent performance for a small shot size at close range use only.

Again, a very good, even spread and density of shot pattern. The BB shot size gives less total pellets than No 3 obviously, at 96 on this target but with greater energy. Nice spread at 27x 22-inch pattern, with 37 lethal hits to the front section i.e. heart/lungs, spinal cord and brain, whilst 59 hit the rear section.

Good all-round fox load this one. I had a total of 39 AAA pellets hit within a 31x 29-inch diameter. But as expected the larger shot had some fliers, so eliminate these (two pellets) and the spread was an even 18x 23-inch diameter. Now you had 21 hits and 18 misses but 15 good lethal hits and only 6 in the rear section, foxy is down.

SG is a large pellet at 8.4mm diameter but it hits hard but the trouble is there are less of them, so they need to hit in the first place. Therefore, full choke may not be the best choice, due to a cramped internal bore diameter crushing pellets on exit and causing fliers. This proved to be true, as of the nine pellet hits I had produced a 16x16-inch spread but one wild flier; eliminate this and you have a tight 7x15-inch spread. Only three pellets failed to connect with six hits, of which five were in the lethal zone, enough said.

Velocity loss is less than smaller pellets, due to the greater mass and therefore momentum. For instance, a BB of 6.17-grains weight at 25-yards has 925fps and 11.7ft/lbs energy and at 35-yards is 805 fps and 8.8ft/lbs energy. Compare this to a standard No 6 shot weighing in at 1.70-grains; at 25-yards, it is 825fps and 2.6ft/ lbs and at 35-yards has only 710fps and 1.9ft/lbs. Fine for pigeons and pheasants but on a thicker-skinned fox, marginal. However, you will say it’s not just one pellet hitting, as shotguns kill by multiple trauma; that’s true but if it does not penetrate to the vitals, it does not matter now many hit! Bigger is always better, as it penetrates deeper.

The Eley Alphamax No 3 shot though, at close range, would be a compromise and effective if used sensibly.

Interesting; however, I still need, as in all things ballistic, to test more variables at differing ranges and chokes to see how pellet density, spread, and point of aim varies.

I really liked the Game Bore AAA load and it would be my choice for a dedicated fox load, although those Eley Alphamax and Game bore Buffalo loaded BB loads are probably a good all-rounder, as the greater pellet count and enough energy would topple a fox at sensible ranges. I want next to try some SSG and Special SG loads to fill in the gap between AAA and SG. That Mossberg Duck Commander really shot well and now I have a pump action version with a scope/ Weaver rail, so I can add some sights for sighting and adjust the choke delivery system, next time.