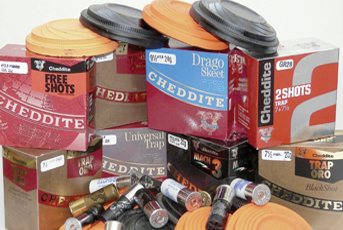 Even if you’ve never shot with Cheddite cartridges it’s more or less a given that you’ll have chambered up a load that contains Cheddite components.

Cheddite make the preferred cases, wads, propellant and primers for many of the world’s top brands of cartridges. The company has carved out an enviable reputation for itself as the suppliers of some of the best, most consistent and respected componentry in the industry, all determining factors in the production of high end competition and hunting loads.

Now imported from Italy directly into the UK by Malmo Guns, the initial range of Cheddite cartridges is already extensive whilst as time goes by, more and more of the company’s ever expanding range will start to make an appearance around the shooting grounds and on the game shoots. Similarly, given the range of sizes, shooters can tailor whichever Cheddite load they prefer to their own particular requirements, disciplines and even chosen muzzle restrictions, case design, propellant types and shot size variants intended to give the competition shooter a cartridge as near bespoke as they’re likely to ﬁnd.

In respect of the evaluations as carried out here, the ﬁrst speed quoted is the manufacturer’s muzzle velocity, the second speed an observed velocity shot through ½ choke at a distance of 10ft. All shots were taken using a 28” barreled semi-automatic shotgun under mild, overcast conditions whilst the patterning was carried out at 30 yards through the same ½ choke restriction. Similarly, all ammunition tested is designed for 12 bore shotguns with 2 ¾” chambers or longer.

The top of Cheddite’s range of trap shooting cartridges are the Trap Oro, beautifully presented in their gold and black or gold and red cartons, they have 70mm gold plastic cases, neat and uniform six point crimps, neat black script and 20mm deep golden brass heads, the Oro come in both 24 and 28 gram sizes along with the choice of gold or as the name suggests, Black Shot.

Similarly, the ﬁbrewad 28g 7½’s Black Shot factory ﬁgure of 1,279fps drops to 1,156fps once the conﬁnes and internal pressure of the barrel have been left behind. The fall off of the observed over muzzle speeds indicate that all the Trap Oro as tested produce shot velocity well above the expected levels of deceleration whilst patterning produced ﬁgures of 91% or above.

All three Trap Oro cartridges were smooth to shoot with minimal recoil whilst their performance when coming into contact with the clay produced clean, well deﬁned, no compromise kills. The overall conclusion of all three Trap Oro is that of a trap orientated shell that is more than capable of delivering the types of results top trap or sporting shooters consistently look for and demand at the highest levels of the sport.

High speed by name and nature Cheddite’s Mach 3 are plaswads that are available in both 24g and 28g loads both ﬁlled with 7½’s. The black and silver script embossed carton is reﬂected in the contents, each black plastic and long brass polished silver head is printed with neat silver script and enclosed with a tight, neat six point crimp.

Testing the 28g variety the speeds were 1,338fps with an actual observed mean of 1,213fps whilst patterning produced an even 89% concentration. A noticeably punchy round the Mach 3 is best suited to the more demanding sporting shooter looking for a cartridge that can noticeably reduce the amount of required lead combined with clean, concise kills out at forty yards or as ammunition held in reserve for the more difﬁcult, long range or high speed clays. Best suited to a heavier style of sporting 12 bore, whilst shooting the Mach 3 exclusively could prove tiring, as a high performance second barrel load or a shall held in reserve for distant or fast disappearing targets, the Mach 3 is an ideal cartridge to have to hand.

An idea usually reserved for heavy, wildfowling type loads Cheddite’s 2Shot is an unusual concept for competition purposes and brand new to the Cheddite competition range. Available in both 24g and 28g each cartridge is ﬁlled with an even mixture of 7’s and 7½’s, 7’s and 8’s and especially for the skeet shooter 9½’s and 10’s. The idea behind the concept is to give the shooter an elongated shot string as the overall pattern develops, the larger of the two shot sizes eventually making their way to the front of the pattern, the smaller shot’s earlier depleting energy causing them to fall back.

But whilst the smaller shot starts to lag behind in comparison it also produces a wider, denser pattern the combination of the two generating a far more evenly and pronounced spread.

The 2Shot as tested were the 28g plaswad 7+7½ designed for both trap and sporting shooting. Presented in a predominantly red and silver carton and dominated with an unmistakable number ‘2’, each shell is made up of a white plastic case complete with blue script and a deep, well deﬁned six point crimp along with a long polished silver head. By factory speed ﬁgures the 28g 7+7½ are the slowest of the 2Shot range with an indicated factory muzzle velocity of 1,263fps with a mean average and more than respectable observed of 1,186fps with a consistent, evenly distributed 92% pattern density at 30 yards.

Producing efﬁcient, clean kills at thirty to forty yards distance, the 2Shot will appeal to the trap and sporting shooter looking to give their shooting something of an edge. But whilst the 2Shot are an efﬁcient, competent and effective load, they aren’t the cure all some shooters may think them to be. In other words if you can’t kill your clays with a conventional load the 2Shot will make little if any difference.

However, these soft shooting, low recoil cartridges are an efﬁcient, dependable and very capable load that under certain conditions or certain targets will generate a kill when a conventional single shot size load may well have failed or done nothing more than chip the rear edge. Please take heed though, none of the 2Shot loads make up for poor or inaccurate shooting.

Something of a misnomer, Cheddite’s 32g ﬁbrewad Free Shots fall into both competition and game cartridge catagories, these cartridges are extremely capable in both ﬁelds. Taking its name from the unique wad design and available in shot sizes from 5 down to 10, whilst the size more or less precludes the Free Shots from virtually every discipline here in the UK, its does have a purpose in mainland Europe and various parts of America.

Coming in a two-tone red carton each Free Shot comes in a clear, deep brass case overprinted with black script, each and every component clearly visible. Whilst Cheddite choose not to quote an actual muzzle velocity, the Free Shots observed mean average speed of 1,215fps allied to excellent 90% patterning abilities, make these all round shells as tested an ideal load for the live pigeon shooter be it Box Bird or Colombaire.

Be it in the Balearic Islands where the discipline is still shot or in the various North or South American regions states where the sport is still popular, through an average 12 bore game gun or a dedicated, custom built shotgun, the Free

Shots will deliver. If they have a downside it’s their rather loud and aggressive traits, although perfect characteristics when pitted against a fast disappearing Blue Rock.

Whether you shoot the English or Olympic versions of skeet, Cheddite’s Drago T3 load could well prove to be the ideal load for the both. Presented in a distinct red and blue carton these plaswad loads are available only in 24g size and ﬁlled exclusively with 9½’s, the preferred shot size of most skeet shooters.

Contained within a translucent blue case with mid-length brass, a tight, deep, well formed six point crimp holds the shot in places whilst a deep, double cushioned wad and cup occupies the bulk of the case’s interior. The indicated factory speed of 1,312fps decelerates to 1,259fps at 10ft, a distance not overly far short of the range at which certain skeet birds are actually taken at. Unlike the other cartridges, the Drago Skeet was evaluated at 20 yards through ¼ choke more akin to the cartridge’s real life conditions, the resultant patterns uniform and well formed producing a 92% pattern.

Shot at normal skeet distances or close to medium range sporting clays the Drago Skeet is an impressively efﬁcient and effective load.

The cartridge is noticeably soft and comfortable to shoot over extended periods, a welcome attribute when concentration and mental focus are the order of the day or that score decimating awkward second bird or the pair requires special attention.

Every cartridge manufacturer has one and Cheddite are no exception, their mid-range Universal Trap ammunition equally at home on any target, not just the going away birds the name would suggest. Contained within a grey and red carton the plaswad Universal Traps are available in 24g exclusively ﬁlled with 7½’s and 28g with the option of 7½’s, 8’s and 9½’s. For these all rounders Cheddite use a clear, translucent case printed with minimal blue script with a short brass head and a homogeneous six point crimp.

Speed wise the Universal Trap has an indicated factory muzzle velocity of 1,263fps across the shot size range with an observed of 1,197fps for the 7½’s as tested. Patterning produced an even, uniform 89% spread whilst the cartridges were comfortable to shoot. On going away targets the Universal Trap produced clean, concise kills whilst their performance on sporting targets was as efﬁcient as a dedicated load. For the competition shooter looking to try Cheddite for the ﬁrst time without the need to choose a more target speciﬁc load, the Universal Trap cartridges are an ideal introduction to the range to a degree, many shooters may well ﬁnd these are the only Cheddite loads they’ll actually ever need, the Universal Trap’s all round capabilities fulﬁlling the needs of shooters of all abilities.

Irrespective of the discipline you shoot or at whatever level, given their extensive range Cheddite will more than likely manufacture a load ideally suited to your needs and pocket. Regularly checked and upgraded when and where necessary, if there’s one thing you can guarantee, if you elect to be come a dedicated Cheddite shooter is that you’ll always be chambering up with a load that’s as good as it can be and a brand of cartridge that enjoys widespread respect by some of the world’s top shooters. And whilst all shot decelerates once free of the muzzle, the percentage off demonstrated by all the Cheddites as tested was noticeably less than many others.

For current prices, further information or to arrange delivery of your ﬁrst consignment of Cheddite cartridges contact the UK importers Malmo Guns on 01524 793007 or visit www.malmoguns.com. Alternatively, for any shooting ground or suitable trade outlet interested in stocking either part of or the full range of Cheddite cartridges, once again contact Rosie Prest at Malmo Guns. GM