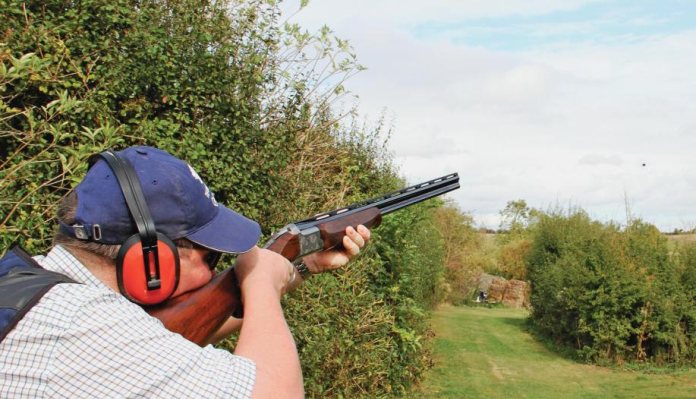 When Eley’s 410 Trap cartridge first launched it won the coveted Shooting Industry awards for best new clay cartridge. Instantly well-received, the specialist powder and the magnum shot used has really given the market a great choice in .410 clay competitions.

The 410 cartridge is a bit like the 22 rimfire rifle round in that it’s always there, often overlooked or considered a low-powered option, but when is all said and done it’s an absolutely fabulous cartridge that does not get the praise it deserves.

For years the 410 cartridge has languished as a starter or vermin gun round for short-range vermin work. But, equally, both hunters and clay shooters have coveted this mini classic round for offering a challenging yet very rewarding shooting experience.

Because of the growing demand for better quality 410-gauge ammunition Eley have developed probably the best clay target 410 round in the world. Bold statement, but as soon as it was introduced it won The Industry Awards best new cartridge. Yes, it is squarely aimed at clay shooters with its Eley Trap .410 name, obviously, but as with all things it also double-duties with the correct chokes for vermin too, which interested me.

Available in 2½-inch or 3-inch shell lengths, the shorter because some of the older classic guns, single or doubles where only 2½- inch chambers. Both offer Eley’s blend of technological know-how and modernday powders and shot to produce a 410 round that is both hard-hitting and produces extremely good patterns, all that one wants from any shotgun cartridge.

I could only manage to get hold of the 3-inch rounds, which was a shame, but I see these being the most popular anyway. However, the 2½-inchers are available in No 7.5 or No 9 shot of 14- gram loadings at a velocity of 1150fps each, with plastic wad and star crimp closures. The 3-inch version I had on test was basically the same, with its plastic red case, high brass head and silver lettering and six-star crimp closure. But the 3-inch, as you would expect, had a larger payload of 19-grams, which is about the maximum charge you can get into a 410 safely as all 410-gauge rounds are high pressure.

Still with a plastic wadding of 1.08-inches in length and diameter of 0.4085-inches, it is a twin petal design but leaves 0.745 of the lead shots exposed inside the cartridge casing. You have a choice of No 7.5 or No 8 shot sizes, I had No 7.5 which is probably your best all-rounder, Skeet shooters might disagree.

Muzzle velocity is a bit slower due to the extra weight of shot at 1100fps, but all Eley Trap 410 loads use the excellent GSB 146 powder for a clean burn, consistent velocities and thus good down range performance and patterns.

I weighed 10 cartridges to ascertain their overall consistency of weight and then wad weight and finally charge weight. Any discrepancies will affect the performance, as pressure and velocity will differ, and if the crimp is sloppy the primer can bump the charge and wad forward before igniting the powder. These are Eley and had no such issues, but I have had problems with 410 like this, so visual and weighing prior to use can eliminate a hang fire or misfire, just saying. Overall weight for all 10 cartridges was 395.6-grains with the plastic wad weighing 9.8-grains or 0.635-grams, with an overall charge/pellet weight was 307.4-grains or 18.4-grams. So, each No 7.5 lead pellet weighed and average of 1.2-grains which equates to a total of 256 pellets per cartridge.

It’s always a bit tricky testing velocity through a normal chronograph, but the smaller shotgun cartridges like the 410 help give a single projectile signature over the sensors and not a wad and shot separately.

GB Shooting is where my son, Jake, learns to shoot shotgun, tutored by Guy Bond, the owner. His clay ground is just superb for testing out kit, as his layout can be shot from any angle, so you have an infinite possibility of clays presented to you.

425 410 double, which is a real honey, and even I started breaking clays with the Eley Trap loads. It’s amazing that such a small 19-gram loading can break clays at quite astonishing ranges, primarily due to the excellent patterns thrown and also a No 7.5 pellet traveling at 1087fps is the same be it from a 12-gauge or 410, just less of them.

It was more fun shooting a 410 at clays than the regular 20g or 12g as it had no recoil, low muzzle report, less muzzle flip for a sighted second shot, and we just laughed as another clay was dusted with that excellent Eley Trap loading.

On the pattern boards

I used the Remington 870 with the ½ choke at 25-yards and we had a total of 191 pellet strikes with a slight upward and left bias, but it was breezy. The central 15-inches held over 65 No 7.5 pellets with the remaining 126 around the periphery. Very dense pattern and good coverage despite wind moving the pattern. At 35-yards I had a more centralised pattern with a total of 140 pellet hits with 59 central and 81 outer hits. With the full choke from the Remington 410 it actually decreased the density by 131 hits and 45 central and 86 outer strikes, confirmation the tighter choke was crushing pellets and blowing the pattern.

Interestingly, and this is quite common with 410 loads and those with plastic wads, the choke patterns were on the tight side of ½ choke and the full choke was not much better than the ½ in total overall pellet count.

Excellent, in a word, low recoil, low noise, high density pattern and very consistent performance. Street price is £259 per 1000 from Just Cartridges but worth every penny, in my view. I will be after some ferals and squirrels in the next instalment.