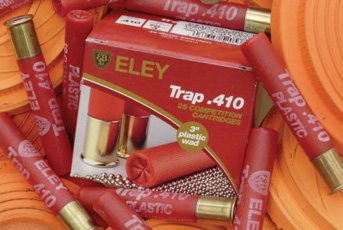 Shooting the major disciplines with a .410 is something the Americans do is it not? However, whilst clay breaking with what tends to be referred to as a sub-gauge is still in a minority in the UK, things could be about to change courtesy of Eley. A newly developed competition specific load, the company’s new Eley Trap 410 Magnum could well be the kick-start competitive 410 clay shooting needs in this country. Whilst there is a small nucleus of clay shooters who have shotguns with the full barrel sets or 12 bores with hanger barrels and a set of inserts, with more .410 shotguns now entering the market at seriously tempting prices, interest in .410’s is now increasing.

However, 410 shooters still tend to be in a minority whilst the overall image of this calibre still remains - for many - a starter shotgun for wives and children or as a vermin elimination tool, especially in silenced guise. Equally, the .410 shotgun has often been ostracized because Big - Mark Stone tests the Eley’s new Trap .410 Magnum cartridges – and finds a little cracker! many people find hitting anything with one beyond them.

All I can say is that after trying the new Trap .410 loads the image of this calibre could well change for ever, Eley responding to market requests to develop a performance competition .410, the end result extremely impressive.

Packaged in one of Eley’s new look red boxes, the fact that the printing states the contents is for competition use instantly sets them apart from the more universal purpose envisaged. Likewise, once you take out one of the new cartridges, each red with white script shell looks like a competition load. Available in both 2½” and 3” and loaded with 7½’s, 8’s and 9’s with the emphasis being on plaswad, although intended for the Trap disciplines the shot choice and size actually means these new Eleys provide the shooter with universal applications.

Taking the 3” as the tester, each red cased cartridge is an exact 2¾” long, the remaining chamber space required for when the tight, precision sixpoint star crimp has opened. Examine the 5/8” head of this new Eley and you can immediately see from where the competition orientation has been drawn, the word Fiocchi being lightly embossed around the oversized primer. Moving inside the 19 gram cartridge, a mean generous average of 20.2 grams or 290 individual pellets of well formed 7½ shot is housed in a two petal cup plaswad which in turn is attached to a short, simple propellant wad. Beneath this sits 1.07 grams of Eley’s latest powder, small metallic balls slightly larger than dust all separate from each other and the reason this new ammo performs as well as it does.

Shot through a new Khan Arthemis .410 choked full and ¾, muzzle velocities measured 1,200 fps. When discharged through full choke at thirty yards, the pattern still contained over 89% of the total shot charge, the pattern being tight enough to ensure no clay was able to slip through the pellet net.

Packing a genuinely outstanding punch, this .410 load performed beyond expectations, the quality of kills in excess of thirty yards the equal of any high-performance competition load on both going away targets and general sporting birds. And whilst these diminutive loads hit as hard as any cartridge you’ll encounter, recoil is more or less non – existent. Price wise Eley have, like their new ammunition, surprised the market in that the most you’ll pay is £6.50p per box of twenty-five 3” cartridges - less if purchased by the thousand - and £6.25p per box for the 2½” version.

The new Eley Trap 410 is such a genuinely outstanding load, it could well become solely responsible for whole new levels of appreciation of this oft maligned and overlooked bore, to an extent I for one have seriously had to re-evaluate my attitude towards .410 shotguns. Loaded up with these new Eleys, each and every 410 shotgun can enjoy a new lease of life on the layouts or in the field, the potency of these cartridges considerably in excess of anything that has gone before.