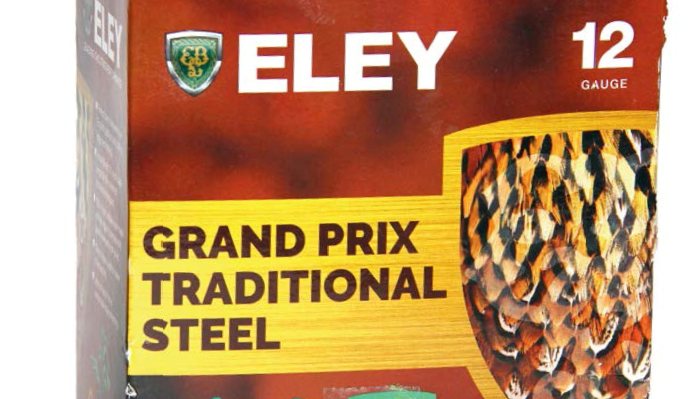 Steel shot is here to stay, unfortunately, so we have to make the best of a bad deal in my view. With many shotguns requiring the Fleur-de-lys proof marks for highpressure steel, it’s nice to have some standard pressure loads for more traditional, nitro proofed guns to test for a change.

Eley Hawk Ltd now offer their Grand Prix cartridge in a steel loading and it boasts a blend between old school tradition and modern technology. The true 2 ½” (65mm) long cartridge utilises a 10mm brass head for ease of extraction and offers a lighter recoil round that can be used for a full day of shooting if required.

Not only is the shot now steel but this load includes Eley’s 100% Hydro soluble, Pro Eco wad system, which is made from organic compounds, so is plastic-free and therefore non-toxic.

The Grand Prix Traditional Steel is a standard load approved for nitro proofed guns. It contains 30-grams of #4 shot and is instantly recognisable due to its orange plastic case and rolled top closure. For comparison, the normal lead pellet Grand Prix loadings are 30-gram #5 or #6 shot.

If you have any doubts about the proof of your gun, it’s always best to check if it’s is suitable for steel shot. This can be done by checking the British Proof House Equivalency Table or by talking to your local gunsmith.

I like Eley Grand Prix as they were the first cartridges I used on my uncle’s farm in Kent as a teenager, and those rolled top, orange cases always remind me of happy times, when life was simpler.

The cartridges are designed with the traditional side by side shotgun in mind and as the box states, they show a true 65mm case size. Obviously, they are suitable for any such size chambered gun or larger, so long as it is in nitro proof.

The 10mm brass head does make extraction from the shotguns chambers easier, as longer head sizes can drag on the chamber wall, especially with steel loadings. The ribbed orange casing shows clear, black lettering with all the relevant load data and, of course, that traditional rolled top closure secured by a white card.

Eley’s Pro Eco wad system is made with only organic materials and is 100% Hydro soluble, so it dissolves in water within 24 hours. If it’s not dissolved in water by direct contact, then it will degrade of its own accord within 30 days and then fragment into the soil in a further 3 months. It is a full cup wad that encloses the entire steel shot payload, right up to the paper rolled closure. This is to ensure that the steel shot has minimal contact with the bore when travelling up the barrels. Below this is the PSB +2 propellant that propels the #4 shot, 30-gram loading to an average velocity of 1279 FPS (412 MPS).

I used my trusty 12-gauge Browning Shadow with 30” barrels and I fitted ¼ and ½ chokes (remember no more than ½ for steel shot). 30-grams is a pretty normal game load and, of course, we have to go up a shot size to achieve the same striking energy of a lead pellet, so that’s why this cartridge uses #4 shot. So, let’s see how many hit the pattern boards at 30 yards through each choke.

I have found that with most steel shot loads, the pattern will tend to land high above a standard bead aiming position and indeed these did to some extent. In fact, in the past when testing steel shot it is interesting to note that even a ½ choke can be quite tight and actually cause ‘blown’ patterns, where the steel shot grinds together in the bore, rebounding off each other through the choke, often resulting in wider patterns than a lesser choke.

It turns out that this was the case during this test. Starting with the 1/2 choke, we had a typically high pattern, as discussed, with a total of 171 pellet strikes. The outer 30” of the pattern board showed 119, #4 strikes and the inner 15” only showed 52 hits. The bottom of the board was only sparsely hit with shot, as was the lower middle sectors, so game could slip through.

But now the ¼ choke with the same load, and boy what a difference! There was nearly the same number of total pellets strikes as with the ½ choke (174) but if you look at the pattern, it is far better dispersed and only slightly high biased. Overall, pellet coverage was far better, with fewer holes. The lesson here is that the steel pellets were less restricted in the more open ¼ choke and therefore produced an improved pattern. There were 106 outer hits and a decent 68 hits within the central 15”.

Firing the Eley Grand Prix Traditional Steel was, dare I say, pleasant. Recoil was mild in the Browning Shadow but you did notice a difference between the ¼ and ½ chokes, interestingly. It ejected very well, unlike some higher brass/nickel head cases that we were testing at the same time.

All in all, a very consistent steel shot game load for what is a British shotgun cartridge icon. The pattern test showed vividly how different chokes can drastically alter the pattern size and density, and I for one will be testing steel shot more with a ¼ choke rather than the ½ choke I usually test with. Prices for a box of 25 are around the £14.00 mark and 1000 will set you back £449.00 from Just Cartridges.