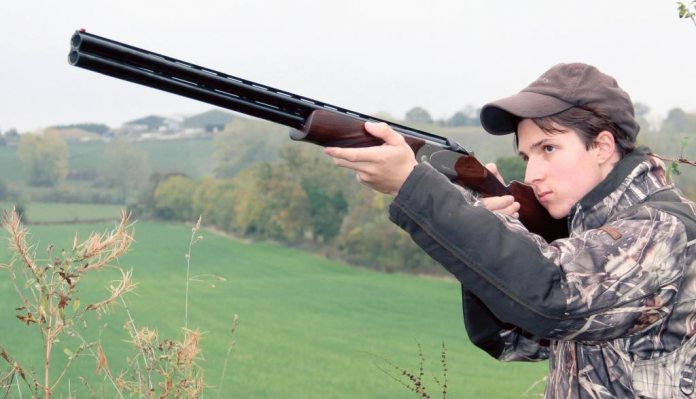 Impressive names usually tend to big up a particular brand for marketing reasons but sometimes the name directly relates to performance and reality. The new Titanium and Titanium Strike ammunition from Eley Hawk in 12-gauge is one of many new hardened lead shot and coated pellet cartridges that seem to be filling the gunsmith’s shelves of late.

This new ammunition is designed with its hardened 5% antimony magnum shot that will also give greater range and striking energy to ensure those long clay birds break. The Titanium Strike version has a nickel coating that is designed to give a far better distribution of shot for better coverage over the whole pattern, without clumping of shot associated with standard lead pellets.

People are cottoning onto the fact that a coated lead sphere is less likely to deform and thus patterns are superior and down-range performance and terminal ballistics are improved also. However, the reality of nickel coating is only as good as the hardness of the lead pellet beneath, which is why Eley use 5% antimony lead in these loadings. Thus, the nickel is there primarily not for added strength, as it already has it, but to stop clumps of pellets binding together as pure lead shot does. You can see this on the pattern boards, where two or three holes are fused together. Titanium Strike cartridges are designed to use hard shot for better density but nickel plating to maintain individual shot down range for a very consistent and even pattern, not necessarily tighter.

But the Americans, especially Winchester, have known this for years with their copper-coated ammunition. Eley’s coating is different, as it uses hardened shot and nickel coating for superior loadings. The trouble is, as with everything new or improved, it costs more and that is true with the Eley Strikes that retail for £300 per 1000.

When you want top performance though, you need to put a little Nitrous in the tank! These Titanium and Titanium Strikes have a velocity of 1500fps (plastic wad) and 1300fps for the (fibre wads).

There are two types of Titanium. The non-coated versions are just called Titanium and use an Ultra hard premium lead shot of 5% antimony but no coating. The 16mm nickel head to the case gives a great performance and allows smooth cartridge loading and ejection. The PSB+ powder used allows a smooth and less felt recoil, yet higher velocities.

By testing each Titanium and Titanium Strike loads, I could see the difference, not only between the differing shot sizes on the pattern boards but also the difference between plastic or fibre wadding per load. The Eley Titanium Strike plastic wadded load No. 7.5 shot size, with a 28-gram payload that equates to about 350 total pellets per cartridge. That’s interesting, as the carton states 2.4 and 2.3mm size for the 7.5 and 8 shot size respectively, which is larger than normal and thus less pellets per charge.

The powder is a greenish/ blue colour, single based flake type propellant i.e. that has progressive burning to produce high velocities at lower pressures, which also translates into less recoil. The case was bluecoloured with silver accented lettering and the high head to each case was a nickel-plated steel material. The closure to the top was the standard six star crimp and was very neat, which is what you want to see, as this, like a correctly seated bullet in a rifle, ensures a consistent powder burn and reliable feeding.

The plastic wad was the Maxam type with ventilated rear structure to reduce recoil and stop pellet damage by the initial ignition thrust of the powder burn. It has a very effective seal to the rear to capture the expanding gases and propel the wad successfully down the bore. You have the usual four petal type top section that cradles the shot and as the wad leaves the bore, they peel away to allow unimpeded travel of the shot downrange.

The Titanium loadings of No. 8 shot and 28-grams had both the plastic and fibre wadding but with a smaller 16mm nickel coated case head. The plastic wads were as the Titanium Strikes, but the fibre wads were the Kleena type that act as an effective gas seal, as well as cushioning the shot upon firing.

I set up my pattern boards at 30 yards and tried the loads with plastic and fibre wads and differing shot sizes and a couple with differing chokes. I used the new Finn 612 SC shotgun for the tests.

First up, where the Titanium Strike No. 7.5 shot 28-gram load with a Plastic wad. I tried these with a ½ and full choke, to see the difference on the boards. Fitted with the ½ choke tube, I had a total of 234 No. 7.5 shot hit the 30-inch pattern board. This comprised of a distribution of shot with 133 outer strikes and 101 inner hits to the 15 inches. You could clearly see no clumping of shot and overall good distribution. Fitted with the full choke tube, I had an increase in pellet hits as expected that rose to 298 total strikes, 64 more than the ½ choke. Here, I had 185 of the No. 7.5 shot hit the outer regions; again, very well distributed without clumping of shot, showing that the nickel coating was doing its job. In the inner 15 inches, I had 113 strikes with good density and evenly distributed.

Next, were the Titanium No. 8 shot fibre wadded shots of 28-grams. Again, the Finn 612 SC with the ½ choke at 30-yards shot a total of 299 No. 8 shot on the pattern board. Here, I had 191 outer hits and 108 inner hits with a slightly higher bias but no clumping and a dense pattern for a ½ choke. With the full choke fitted, I had 344 No. 8 shot size pellets in total, with 161 inner strikes, really dense and well distributed, whilst the remaining 183 pellets were distributed around the outer regions, again a slight upward bias. This is probably my sighting, as a slight change in rib position can make a difference down range, just like a rifle.

I also tried these 28-grams No. 8 shot load with a full choke but with the plastic wadding; this time to see any difference between plastic and fibre wadding. With the full choke, I had a total of 360 pellet strikes, so 16 more than the same loading using the fibre wadding (344) This is expected, as plastic wads enclose the shot column and keep the pattern tighter. These No. 8 shot were distributed quite evenly to the inner and outer sectors, with 184 outer and 176 inner hits with a very dense and even pattern and again no clumping from the hardened 5% antimony shot used.

The nickel coated Titanium Strike version adds another layer of hardness and does indeed stop the lead pellets fusing together, as when I test normal lead shot, you always get groups of pellets fused together and causing 3-4 holes as one. The difference in chokes was not as marked, as expected, but this can also be due to the actual gun and choke system you are using, as well as bore dimensions and forcing cone length. Also, slight elevation or windage of the pattern size is undouble, due to aiming only a bead at the pattern boards and it was quite windy too.

However, looking at the overall performance, one has to say that recoil was good for a 28-gram load, so more shots can be fired with less fatigue. The patterns all were very well distributed with shot. The difference of the plastic and fibre wadding was as expected, with a greater total pellet strike for the plastic wadded Titanium cartridges as the same 28-gram loading. The slightly larger shot sizes did mean less pellets but that will also mean greater retained energy down range, which is why when a Titanium Strike pellet hits a long clay or on the edge it is more likely to break and not ricochet off.

All the little differences the Titanium and Titanium Strike offers combine to give you just that better performance that can mean a perfect score or you cursing that clay that wobbled but did not break.