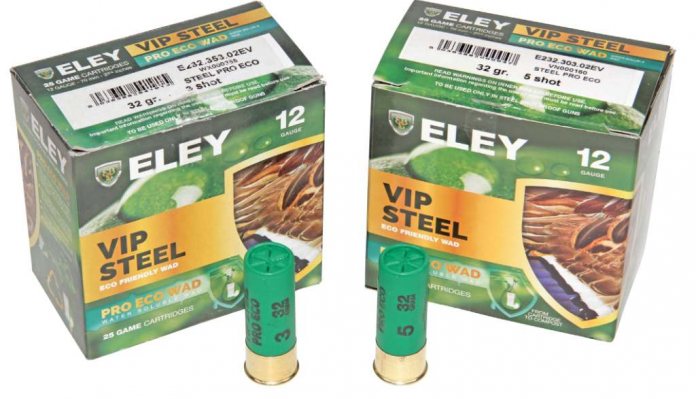 The pro non-lead shooting voice seems to be getting louder these days and whether we want it or not, non-lead ammunition, both rifle and shotgun is here to stay and may well become the norm, heaven forbid!

There are pros and cons when it comes to non-lead shot, but Eley has taken a pragmatic approach and produced a new line of Eco-friendly 12-gauge cartridges that will for the first time appeal to not only wildfowlers but game shooters and clay shooters.

Their new Eley VIP Steel Pro Eco wad cartridges are the first of their kind loaded by a British company, and you can now shoot steel shot cartridges safely with a non-plastic wad that is harmless to the environment.

The new cartridges are available in 12-gauge at present, and I had the game loads on test from Just Cartridges. These were the 32-gram No 3 and No 5 steel shot sizes. Unfortunately the 32-gram No 7 shot loads specifically for clay use were not available at the time of writing.

The Pro Eco wad system is 100% Hydro soluble, so it dissolves within 24-hours in water. It is made with only organic materials, making it highly bio-degradable and thus non-toxic to the environment. If the wad is not dissolved in water by direct contact, i.e. while shooting wildfowl over water, then it will degrade within 30 days and then break down into the soil in a further three months. You can’t say fairer than that. The cartridge body can be collected and recycled in the usual way.

I had the Pro Eco Game in 32-gram No 3 and No 5 shot sizes, but before using them, you must make sure your shotgun has standard steel CIP proofing (the fleur-de-lys mark) and always use a more open choke, i.e. not above ½ choke with steel shot. This is because steel shot gives a relatively shorter shot string and tighter pattern than you would expect from typical lead shot. That is because steel is lighter than lead and thus achieves a higher velocity with the same powder charge, initially at shorter ranges but can lose momentum downrange.

Also, as steel is far harder than lead, it does not deform on firing and so spreads less. The shot column needs a full wad (cup) coverage to protect the barrel from wear as steel shot has no ‘give’ in it. That’s why a biodegradable, old-style fibre wad is not suitable.

The cartridges show a 2¾” (70mm) green plastic casing with a six-star crimp closure that has a heat seal on the crimp join, preventing moisture ingress. They include a 16mm high brass head and are loaded with PSB+3 powder to achieve an average velocity of 1230 fps.

The shot is good quality, with no pellets sticking together, as you would find in some lead shot payloads. This factor, combined with the faster velocity of steel means tighter patterns downrange when compared to similar sized lead shot. On close inspection, the wad is a cup shape made from biomass or vegetable matter, held together with a binding agent. It feels like a thicker version of a biodegradable household food waste bag.

First up, I dropped the wad into a jar of water. After 4-5 hours it was breaking up, and at 24 hours it was well decomposed. Temperature, humidity and water flow rate all play a part in its decomposition. When left in the garden on damp soil, the wad started to soften and lose shape after a week.

Very important is that heat seal and star crimp closure as you don’t want any moisture or water entering the cartridges, as this would start to dissolve the Pro Eco wad! Eley has conducted extensive tests in differing temperatures, and humidity’s and all the cartridges shot fine. I even dropped two of them into water overnight, dried them off and then shot them with no issues at all, not recommended practice but shows the integrity of the VIP Steel cartridge.

On the pattern boards at 30 yards with 30” outer and 15” sectors, I shot the cartridges with a Browning 525 Black Shadow with ½ choke fitted. It should be said that as with a lot of steel shot loads, the overall pattern has a tendency to be a little higher than it would when using a similar lead shot load.

As expected, the No 3 shot 32-gram load shot with an upward bias, showing a total of 119 pellets strikes. There were 28 within the inner sector and the remaining 91 around the periphery. A good, hardhitting, even spread, but with a few gaps as expected from the larger shot size—still plenty of hits on wildfowl sized game.

The 32-gram No 5 load showed a very even spread, with excellent overall coverage and a total of 174 total hits with 46 inner strikes. So no gaps and the 128 remaining pellets hit within the outer 30”. You could not distinguish it between the same weight/ shot size lead pattern. I was very impressed with this load, and it would be my choice of the two. I also shot both in a Derya 12-gauge semi-automatic and all shot perfectly without any hang-ups at all.

We can all see where the industry is going on lead-free ammo, and Eley has taken the baton and run with it. The VIP Steel Pro Eco loads are the result. With the correct chokes and choice of shot size, the patterns were as good as lead downrange. Also with the added benefit of a bio-degradable internal wad system, this new cartridge range should prove popular amongst game shooters needing a lead free option.