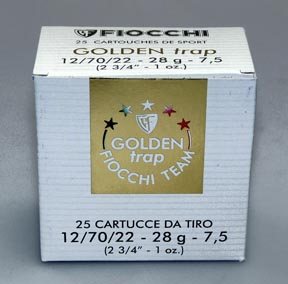 Fiocchi, an almost legendary name when it comes to high performance cartridges is possessed of a history nearly as volatile as its ammunition. A fabled round when it comes to an ability to win at the very highest levels, the Italians have been using these rounds for years whereas despite a number of UK importers trying their best, apart from a limited number of cartridge aficionados, we Brits have yet to get into the Fiocchi way of thinking.

Generously supplied by Andy Hayhurst of Hayhurst Shooting Supplies, Cumbria, although there is an actual Fiocchi UK Ltd, the cartridges seen here are the exalted 28 gram Golden Trap. As soon as you see the carton you realise these cartridges could only be Italian, the glossy white and gold packaging echoing the contents. If you were buying a box of twentyfive shells for nothing more than the wow factor, Fiocchi’s Golden Trap are it.

As rich in information as it is visual desirability, each of the gold overlayed white plastic cased cartridges is an exact 58mm in length and closed with one of the most precise six-pointed crimps you’ll ever see. The overall length is inclusive of the noticeably deep, 21mm gold head, this normally plain item embossed with both the Fiocchi team and shooter logo and housing to one of Fiocchi’s infamous fast burn primers.

The internals themselves also continue the Italianate principles, an average of 343 or 28-09 grams of ten times sized and filtered gold anodised, perfectly formed 7½ sized and identically weighted shot all safely contained within a soft plastic and once again gold plaswad. The whole is then reliant on and exact 1-32 grams of green-grey square cut, rapid burn propellant.

However, it’s under test that the Golden Trap becomes something of an anomaly. Chronographed over fifteen rounds at ten feet through a Marocchi A12’s ½ choke, the mean average observed velocity was a slightly disappointing 1,170 fps, the fastest recorded speed being 1,248 fps. Conversely, patterned at thirty yards through ¼ choke, over 95% of shot resulted in a noticeably even, controlled spread, generating not the slightest possibility for a target to pass through undamaged.

Fiocchi’s gold trap is a cartridge that’s unashamedly aimed at trap shooters at the highest levels. To that end, this type of shooter can rapidly evaluate and appreciate the end results and adjust their style accordingly. At just over £5 per box of twenty-five, its more than worth acquiring a hundred rounds or so to try them for yourself, what the Golden Trap lacks in speed is more than made up for by the sheer quality, regularity and uniformity of pattern. Likewise, shot through a heavier trap gun, the softness of the Golden Trap is instantly apparent; recoil reduced to nothing more than a gentle push, the perfect cartridge for extended competitive use. As the saying goes, try before you buy, but I would seriously recommend any trap shooter to evaluate these top of the range cartridges for themselves.