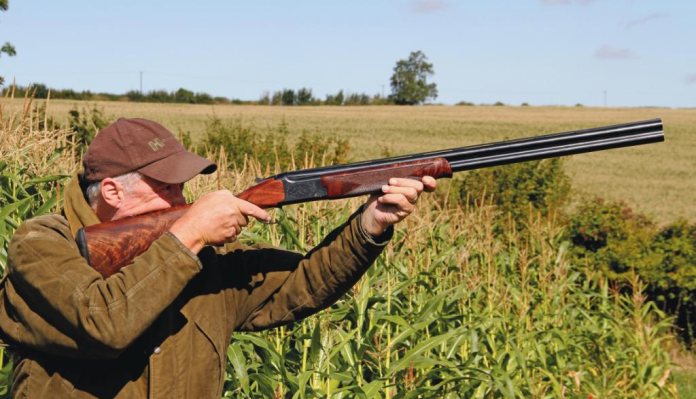 Fiocchi is no stranger to the British market and shifts plenty of shotgun cartridges, especially smaller calibre shells like their superb .410 Magnum. Today, they also offer a huge range of competition and sporting rounds as well as reloading components and rifle cartridges. They cater for the hunting, shooting, security and defence markets and are a fifth-generation dynasty founded back in 1876 by Giulio Fiocchi in Lecco. They now employ more than 1000 people worldwide. They manufacture all their components, which means constant research and production whilst keeping an eye on quality.

With all this non-toxic talk, they have widened their steel shot cartridge range to include clay/competition loads. However, today we are looking at their Wetland game load of 32-grams of #4 steel shot, which is good for wildfowl or game alike.

In shops, it retails for around the £9 to £10 mark for 25 rounds, making it a good value cartridge. So, let’s see how it performs.

These steel 32-gram loads are part of the Wetland range and are a 12- gauge loading with a 70mm case length and high 20mm head. The shot sizes available are 0, 2,3,4,5,6 and 7. So, the larger 0, 2 and 3 shot can be used on ducks and geese, while the 3 to 6 shot can be used for wood pigeons and pheasants. If you are after the smaller game species such as partridge, woodcock and rabbit, then you can obviously use sizes 6 and 7. If the 32-gram load is not enough, then there is also the option of a 35-gram loading. The next step up is a 35-gram Magnum option that uses a 76mm casing and is filled with zinc-plated steel shot.

On test are the 32-gram #4s. Each pellet measures 3.1mm in diameter and on inspection, the steel shot is very uniform in roundness and shows a semi-polished finish.

Propulsion is provided by Fiocchi’s own branded powder and the velocity achieved from a full choked, 28” (700mm) barrel is 1395 FPS (425 m/s), at a pressure of 830 bar. The cases are marked up with a max working pressure of 1050 bar. It’s also of no surprise that the 616 SUR (219 type) shotshell primer that’s used to ignite the charge is one of their own. Looking down the barrels after shooting there were a few odd powder flakes left in the tube but overall everything was quite clean really. I also managed to pick up that typical Italian burnt powder smell as well!

As expected for a steel loading, the wad is plastic and the full cup extends to the top of the case to protect the shot as well as the barrels. There are four cuts to the wad to allow it to fold back after exiting the barrel and the top closure is your typical six-star crimp type. This ensures a good weather seal, plus it helps with the initial ignition and back pressure to keep things consistent.

I shot the Fiocchi Wetland cartridges in my Browning Shadow 12-gauge, using the top barrel and a ½ choke, which incidentally, is the maximum choke for a steel loading. We patterned at 30 yards on some boards to ascertain the pellet distribution and density/evenness of the spread.

For such a large shot size like #4, you need at least 32-grams to achieve decent coverage on the board and therefore game. This is because there are fewer pellets than a standard #6 game load, which is an important consideration if you are going to use them for pheasants/ pigeons. There is nothing to fear though as Fiocchi cartridges always seem to pull the rabbit out of the hat when it comes to good patterns, and this load was no exception.

We had a total of 148, #4 pellets striking the whole 30” pattern board, of which 101 were distributed around the outer sectors, whilst the remaining 47 hit the inner 15” diameter. Yes, there was an upward bias to the shot pattern, as is true to most steel loadings on 1/2 choke, and this meant that the two lower, inner sectors had 7 pellet hits apiece, whilst the corresponding upper sectors had 15 and 18 pellet strikes apiece. Overall, a very good, even coverage with definite lethality to the shot distribution. As with all steel loadings, I would aim a tad lower to bring the whole pattern back to where a lead shot one would be.

As discussed, the barrels were quite clean after shooting and required no special cleaning. Recoil was very easy on the shoulder, which is due to a combination of the Browning 525’s design and the smooth nature of the steel, 32-gram loading. However, we did have a few less than enthusiastic case ejections as the larger 22mm heads did cause a bit of sticking. We tried both chambers to test the issue and the same happened, so just be aware of this. Might just be my tight chambers?

I thought the Fiocchi Wetland, 32- gram, steel, 12-gauge loads were really good as some steel loads can be very finicky about the barrel choke they like. The load in these cartridges gave very good patterns considering the larger #4 pellet size and would only get better with the 35-gram loading, I am sure. Although denoted as a Wetland round, this would make an economic, all-round game load in my view – just a thought.