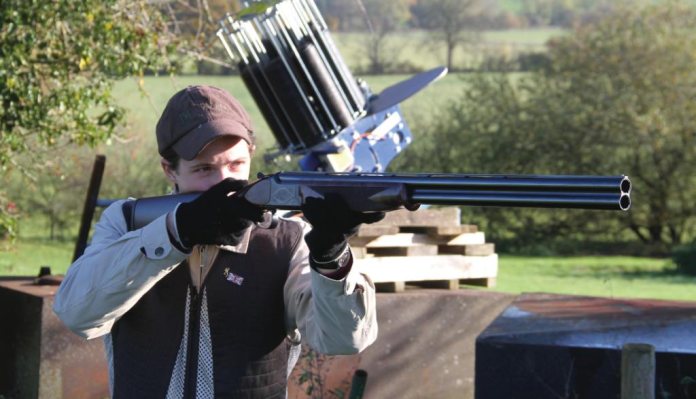 Like the Hull Pro Fibre tested recently, we have been using Gamebore’s Blue Diamond for casual clays, simulated clay days and rough shooting squirrels in woodland.

Designed as a clay or competition cartridge for those that want a low recoiling round that produces superb patterns, the Blue Diamond can be shot all day and won’t hurt the shoulder or wallet. Just Cartridges retail them for £220.50 per 1000. Part of the success of Blue Diamonds is due to the combination of excellent components that Gamebore uses. They all work so well together to produce a clean-burning, fast, yet low recoil round.

The secret behind the outstanding patterns and manageable recoil is Gamebore’s use of the Baschieri and Pellagri, Gordon recoil reduction system. In addition to this is their own legendary Diamond Shot and a dose of Vectan powder. There is also a choice of pellet sizes and the option of plastic or fibre wad, so all bases are covered. You can see why some shooters start with these rounds and never stop using them!

The colour of the cases is translucent dark blue. Large, visible gold lettering makes up the logo and indicates the shot size, weight and 70mm length of the cartridge. The build shows a very consistent six-star crimping to the closure for correct ignition and pressure. The rim measures 12mm and is brass.

The most noticeable difference of the Blue Diamond case is when you turn it over and look at the primer end. Firstly, the primer is a CX2000 primer that consistently and reliably ignites the powder. This helps the cartridge to produce good velocities with a low shot to shot differences. A good primer is far more important than many think, it’s what starts the whole firing cycle off.

The primer is held via the Gordon case design, which is a revolutionary designed base wad incorporated within the case head, that will reduce recoil by nearly 15%. This really is noticeable and means far better performance, with longer range shots that do not translate into harsh recoil. It’s a win-win! As a result of this system, the shooter can have longer shooting sessions without getting punch drunk with recoil and can really concentrate on improving their technique. This is because the Gordon system acts like a cars shock absorber system and helps to reduce that harsh initial recoil that can cause flinches.

This system is exclusive to Gamebore in the UK and links to the very well-known Italian manufacturers, Baschieri and Pellagri. Visually, it looks like a blue plastic ring inserted around the primer, with the Baschieri and Pellagri name embossed into it. However, it also controls how the powder sits within the inner cup section, which is the secret of how the whole system works so well.

Gamebore has gone for top of the range Vectan powder from Nobel Sports. It not only burns cleanly but is a reliable powder for shotgun use as it produces an economic load with reliable and consistently smooth burning characteristics.

Next, and equally important, is the Gamebore wad system. The plastic wads are manufactured in house to their own specifications and help the cartridges to produce perfect patterns down range. The non-fragmenting, 100% fibre wad is of equal quality, shows a single piece construction and provides an excellent gas seal.

Of course, Gamebore is well known for its Diamond Shot. Manufactured in the UK using their own shot tower, it’s lead shot and then some. It is graded and then polished in a special process to produce lead shot that is as spherical and accurate in size and shape as possible. This ultimately helps the shot achieve better patterns and retain more energy down range. It is available in the Blue Diamond as a 24 or 28-gram loading. The former is only available with a shot size of #7.5, while the latter is available in #7.5, #8 or #9. The cartridge combines high velocity (1430 FPS) with moderate recoil in any of its loadings. When combined with some of the heavier guns of today, it is very low recoiling. Even in some of the Ultralight or alloy framed 12-gauges, it is still perceivably lower recoiling.

I have used these cartridges to good effect in my old Tikka 512 O/U, which I should never have sold! You do not need or want a heavy load, otherwise, the shoulder will suffer on simulated game days where it is not unheard of to shoot over 500 shots!

Today, the 24-gram loading with fibre wadding is our preferred 12-gauge load for informal or formal clays, as well as for a general walk through the woods after vermin. It always patterns so well and with its low recoil in the 12-gauge Browning Black Shadow, you can shoot in odd positions/ angles at vermin without fear of heavy recoil.

Setting up the pattern sheets at 30 yards, the 24-gram fibre wad load with the ½ choke fitted, showed a total of 211 #7.5 pellet strikes. There were 70 inner strikes to the 15” circle and 141 around the 30” periphery. The recoil was very low with no 12-gauge snap so a second shot is easily administered.

Gamebore’s Blue Diamond are one of the industries great cartridges. They are aimed at high volume, low recoiling scenarios but their performance makes them excellent at so much more.

You will never tire of shooting these loads, especially the 24-gram ones. I have even had some excellent rat shooting using the #9 shot versions, but that’s another article.