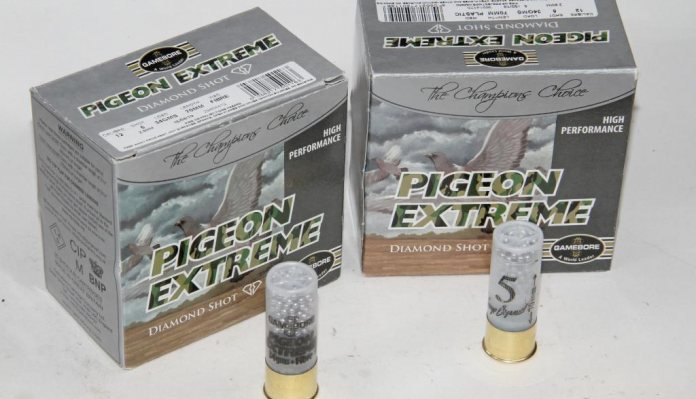 Gamebore is based in Hull and offers a comprehensive range of shotgun cartridges for all manner of game and clay applications. With pigeon shooting being so popular it is no surprise that specialised rounds for this species alone are well catered for.

With the help of multi World Champion George Digweed, the company has developed a pigeon load that combines high velocity, good shot patterns and retained energy down range. The new cartridge is known as Gamebore Pigeon Extreme and it uses lead shot produced from the manufacturers own shot tower as well as premium powders and primers for a superior loading. It is designed for shooters who want the maximum performance from a cartridge and are prepared to pay a little extra for it. Just Cartridges show a price of £333 per 1000.

The new cartridges are only available with a load of 34-grams of No 5 shot (2.8mm) but there is a choice of either a plastic or fibre wad. I like the no-nonsense one load attitude, it makes you concentrate more on just shooting than wondering if you should have gone for a smaller or larger load.

I had both types on the test, each showing a 70mm long case, made from a high-density polymer plastic that is see-through, making the contents visible. There is a good concentric form coupled to a very good sixstar crimp closure. Included is a high nickel-brass head that gives smooth and reliable ejection. A CX2000 Primer gives a consistent burn for a small shot-toshot variation in velocity so pressures are reliable and safe, plus down range performance is maximised.

The powder itself is Vectan, a very well-known brand that I have used for my rifle reloads. It achieves consistent, reliable velocities and is clean burning so minimal residue is left in the bores after a day’s shoot. Also, it is cleaner to shoot in a semi-auto too. The cartridge is loaded to achieve high velocities of up to 1450 fps extending its range and knockdown power.

Wads and shot The plastic wad version is manufactured in house with a clear separating petal shape and cushioned cup design. It does not quite extend to the crimp so some of the topmost pellets are sitting free. The fibre wad shows a singlepiece construction which is non-fragmenting with 100% fibres. This means it achieves a perfect gas seal on firing and therefore forms good patterns on target, they are Eco friendly too.

The pellets used are Gamebores proprietary make, the trademarked Diamond Shot produced in the only working shot tower in the UK. The lead pellets are graded for roundness and then polished to produce consistent shape, size and weight. This is why Diamond shot produces good, even patterns and retains terminal energy due to its excellent spherical shape. This is appreciated when tackling high or fast-flying game where a good pattern and maximum energy are both crucial. With a load of 34-grams of No 5 shot, you should have approximately 256 pellets per round which is a good combination of weight and pellet size.

With the pattern boards set up at 30 yards, the tests were conducted with a 12-gauge Browning Black Shadow with ½ choke fitted. It was very interesting to see and as expected really, the plastic wadded Pigeon Extremes shot tighter patterns, so more in the central sectors of the pattern board than the fibre wadded loads. What was really amazing was the total number of pellets that hit the boards was identical for both wad types; 183. I have not had that before and shows the Extremes consistent nature.

I shot the plastic wad version first and yes, you can feel the extra payload and larger shot size but it is not unreasonable at all, plus the Browning has such a nice fit you are saved from any red cheeks even after firing a lot of shots. On the pattern board we had good coverage with a few vacant spots but a total of 183 No 5 pellet strikes with 64 inner hits to the 15” sectors. The remaining 119 pellets were spread around the outer sectors.

We also shot both versions through three semi-auto shotguns, a Fabarm Ellegi, Winchester SX3 and Derya, all shot perfectly. There was not a single jam or hang-up, all three an excellent choice for over stubble pigeons where the three-shot capacity is helpful. We also tried them in several other O/U shotguns and ejection was totally reliable and brisk with their owners saying they all thought that the loads had more punch to them.

Let’s not beat around the bush here, for the money the Gamebore Pigeon Extreme cartridges are worth every penny and are almost as legendary as their Clear Pigeon sibling. With either the plastic or fibre wad version, the extra pellet count from the 34-grams of No 5 shot size does extend the killing range or hit harder at standard ranges when it comes to quarry species like pigeons.