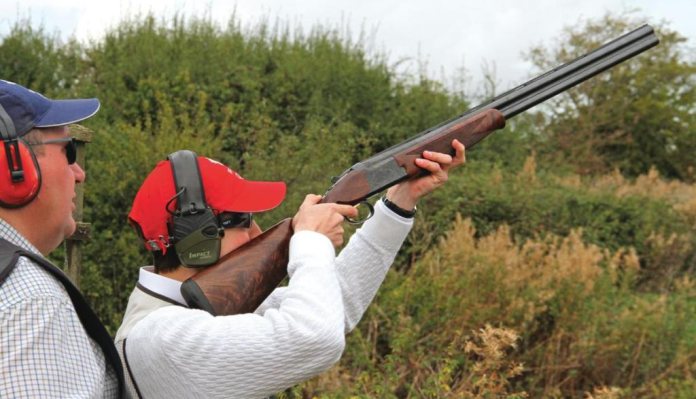 Hull Cartridge has had an enormous influence on shotgun disciplines since 1947. They have produced some of the best shotgun cartridges available for game or clay. We all have to start somewhere and at the clay range is where most learn the importance of swing, follow through and practice.

A consistent cartridge that produces nice even patterns and does not kick too much will help a shooter to achieve results and build on their performance. A lighter 12-gauge load with smaller shot size and an adequate payload is desirable but does not compromise effectiveness or down range performance.

Hull produce their very successful Pro Series cartridges, which includes Pro One, Pro Piston, Pro One DTL 300, Pro Steel and Pro Twenty. The Pro Fibre is just a version of the Pro One but with a more eco-friendly fibre wad system.

The Pro Fibre is packaged really nicely, Hull is always able to catch the eye with their ammunition boxes. Here, a black and green accented box and image of shattered clay and clear lettering. It is aimed very clearly at high volume clay shooting on grounds for instruction or even those simulated clay days.

The fibre wad system used is designed for the competitive shooter as well as the novice, providing a biodegradable system along with the card obturator, to form a good seal in the barrel for consistent ballistics and even patterns down range. You also notice that the barrels are quite clean after shooting, which is partly due to the fibre wad system and also the use of high-efficiency powders for propulsion. Velocities are decent yet recoil is kept to the minimum especially with the 24-gram loading. This ensures a smooth and fast shooting cycle with lighter recoil and therefore less flinch from the shooter, who can learn more technique and shoot more shots in a session. The competition grade hardened shot yields high pellet density and energy for long range targets up to 50 yards, with impressive shot-to-shot consistency too.

There is a choice of either 65 or 70mm cartridge sizes, so ideally suited for older side-by-sides as well as your usual over-andunder 12-gauge guns. There are two choices of load weight too, the 24-gram load is excellent for all-round use, practice for beginners or high-volume shooters. The 28-gram load is for shooters wanting maximum shot density of patterns down range.

These different loads are distinguished by the 24-gram loading being in the 65mm case size only, with a fibre wad. There is a choice of #7.5 or #8 shot size and this cartridge shows a 12mm head height and produces a muzzle velocity of 1475 FPS. The larger 28-gram loading is only available in the 70mm/2.75” case, again with 12mm head size, fibre wad and choice of both shot sizes. It produces a lower velocity of 1450 FPS, due to the extra weight of the payload.

Pellet count is an average and each pellet is made from 5* Antimony for hardness and integrity when fired. The 24-gram #7.5 shot size has 338 pellets and the 28-gram loading increases this to 394 pellets. The #8 shot size, being smaller, increases the number of pellets to 384 in the 24-gram loading and 448 in the 28-gram load, which is impressive. There is only a 0.1mm difference in diameter between the #7.5 pellet at 2.3mm diameter and that of the #8 pellet at 2.2mm, but it does increase the number of pellets carried by each Pro Fibre accordingly.

The cartridge cases themselves - as with all the Hull range - are very well appointed. They have very few tooling or loading marks on them. The cases are all uniform and straight plus the six-star crimp closure is very uniform and even, helping with excellent ignition of the powder.

My son Jake has used Hulls Pro Twenties in his 20-gauge Browning for years now on clays with excellent results, using 21 and 24-gram loadings. Switching to Pro Fibre 12-gauge but keeping to the same 24-gram loading with the option to up it to 28-grams was a natural progression.

We used a lovely Browning Black Shadow 12-gauge with upper barrel on ½ choke for pattern testing at 30 yards. First up, the Pro Fibres are very smooth and gentle to shoot. That’s a combination of a lighter load, progressive powder burn, case design and great ergonomics from the Browning. Even after a few boxes of shooting at clays and the odd squirrel, the barrels remained largely clean.

On the boards, it was noticeable how consistent and regular the patterns produced were. The 24-grams of #7.5 shot - which starts with 338 pellets - still achieved a total of 219 strikes at 30 yards on ½ choke. There were 168 outer hits throughout the sectors of the 30” board and 51 strikes in the inner 15”. All of which were evenly distributed. The same load shot through a ¾ choke printed superb patterns and showed a total of 251 pellet strikes with 81 inner hits and 170 outer hits.

Hulls Pro Fibre 12-gauge load is a real favourite on shooting grounds as it not only produces excellent patterns but is mild to shoot and good value too, we like it.