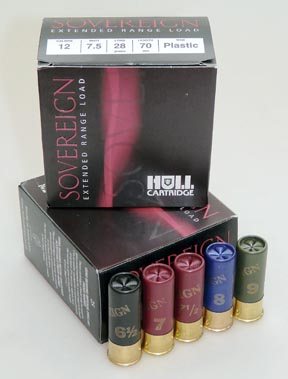 When you have the Royal warrant embossed on the side of your boxes you know you’ve done something right. One of the most respected names in the world of cartridge manufacturing, Hull Cartridge (taking its name from its home city) have contributed to winning virtually every major and minor competition going.

Hull’s Sovereign range is one of the most extensive ranges of competition and game loads (many of which we’ll take a look at over the coming months), and has recently undergone a complete make-over of cases and components, lifting the performance and hence the desirability. Designed with the experienced shooter in mind, Hull’s Sovereign cartridges probably aren’t the ideal load for the beginner or those still finding their competition feet, every aspect of them aimed at class and overall winners.

Available from 24 gram up to 36 gram in both plaswad and fibre wad, with shot sizes from 6 ½ down to 9’s, it’s the 28 gram plastics that are of greatest interest. Irrespective of shot size, it’s the graduated and imprinted red over black that allows for easy identification, the information rich cartons providing the user with warnings as to what shotguns and chamber lengths they can and cannot be shot through.

Where Hull’s Sovereign’s win out is in the ease of recognition. Now all built around 57mm long, 16mm brassed steel heads, apart from the 7’s and 7½’s that both occupy maroon coloured plastic Cheddite cases, the 6½’s are black, the 8’s blue and the 9’s green, all sealed with a deep, well defined six – point crimp. This may not sound much, but if, if like me, you vary your shot size dependant on the target in hand, this is a very important and useful point.

Internally, all five variants utilise an indistinguishable plaswad with an 18mm deep shot cup and a four legged cushion. Beneath this, once again all five are powered by a new green and bronze circular cut, fast burning propellant. Each cartridge is then rounded off with one of Hull’s quick burn, brass enveloped primers. Each cartridge contained a mean average of 27.79 grams of shot along with 1.45 grams of propellant.

Similarly, the mean observed velocity of ten rounds of each at ten feet through a Marocchi A12 fitted with ½ choke generated an average of 1,247 fps with a fluctuation of no more than +/- 17 fps, 6½’s the fastest, and 7’s being the slowest. Patterning at 30 yards through ¼ choke, the average pellet count revealed an 89% strike rate although a minor central bias was exhibited by all five rounds, the 7’s shot concentration being 97%.

However, irrespective of shot size, all five loads produced impressive performance on the range. The sensation when fired is of a crisp, clean detonation accompanied by a short, sharp rap of acceptable recoil. Clean, concise kills on both long ESP and Skeet targets were exhibited by the 8’s and 9’s whilst the 6½’s, 7’s and 7½’s all proved their worth on Trap, ABT and the most demanding sporting birds.

Not the cheapest loads you’ll buy, what I would say about Hull’s new Sovereign range is that they represent one of the best all round cartridges currently available. Likewise, any competitive shooter looking to upgrade their ammunition would do far worse than to try a thousand or two of these cartridges, the Sovereign’s current consistency and performance equal to any on the market.