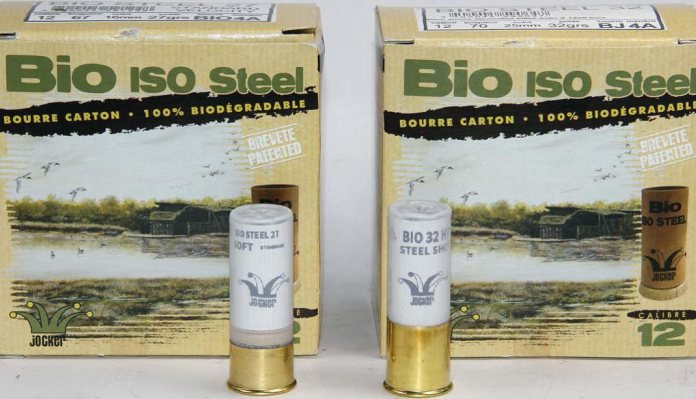 Jocker are a French company and the brand is imported and distributed by Shooting Star Ltd, who also import the well-respected, RC ammo. I purchased some from Just Cartridges.

The two 12-gauge cartridges on test are made in clay or game loadings, but what is of interest at the moment, is their bio-degradability. Jocker uses a recycled cardboard cup and wad system, with the driving base cap made from cork, itself a sustainable product. The casing is your standard polyethylene formed tubing, which is recyclable, just like any other case. Finally, the metal head and primers rust to nothing in time.

The cartridges are available with lead loadings but I am trying out the steel shot versions in the form of their Bio Steel range. We have the 67mm case length, which is designed for older English guns, whilst the 70mm case is for steel shot proofed guns at 1320 bar.

These Jocker Bio Steel Game loads are available in #4 shot size (3.25mm) only, with a load weight of either 27, 29 or 32-grams. I had the 27-gram and 32-gram loads. The former showed a 16mm head and 67mm case length, whilst the latter sported a 70mm case and 25mm head length. Both cartridge types are very well made and I have to say it, very good value for money. They start from £369 per 1000, which is good for a steel loading.

You have a clear or translucent casing, with a vertically ribbed outer surface and there is a well-formed, six-point star crimp for a tight, weatherresistant closure. The casing side walls are uniform, allowing easy chamber feeding and also an unimpeded release of the shot on firing. I believe the primer is a Maxam product, as is the single based powder from the CSB range.

I really like the patented wad system. It takes the form of a paper tube that holds the steel pellets and as such, (for those worried about barrel erosion) none can touch the barrel. It is very sturdily made with a cupped, cardboard gas seal and you also have a fibre wad and cork discs attached to the top and bottom. Different length wads are used for the various load weights, so the same sized outer casing can be used.

This Jocker paper shot cup has internal cuts so that it opens up into eight petals when exiting the muzzle, to release the shot unimpeded in flight. From the outside, it just looks like a straight paper tube and the cork outer wad discs also give a good degree of shot protection from deformation. This is seen on the pattern boards as there was no clumping of the shot at all. It’s an impressive wad all round, as it protects the bore, forms a very good seal in the barrel and is 100% biodegradable - perfect.

Another nice feature, and I have not seen this before, is that all the salient load information is printed onto the wad itself and as the case is see-through, you can easily read it, plus it will never rub off!

Using the Browning Shadow 12-gauge with both ¼ and ½ chokes fitted, the first cartridge tested was the 27-gram offering. This way we can see how the two different chokes affect the steel shot patterns. The 27-gram loads were very smooth/soft to shoot. I’m not sure if it’s the wadding but they also left really clean barrels too, even after a few boxes worth. You will also notice that these steel shot loads also causes the paper/cork wads to open up into petals, producing a complete confetti display! This in no way affected the patterns as they all were very good.

On ¼ choke with the 27-gram, #4 cartridges, we had a total of 153 pellets strikes on the board, with quite a sparse inner 15” sector containing 39 pellets. The outer 30” showed 114 pellets. So, good overall coverage and no upward bias, which is common with some steel loads.

Things improved with the ½ choke fitted. A total of 162 pellets hit the board with a much denser 62 strikes in the inner sectors. The remaining 100 pellets were distributed around the circumference, with a very good overall density and very few holes. Only 9 pellets more, total, than the ¼ choke, but far more in the inner 15” sectors.

Now it was the turn of the 32- gram cartridges. Starting on ¼ choke again, we had a total of 179, #4 pellets strikes. There were 70 inner hits and 109 outer pellets within 30”. So, as expected, the extra payload of the 32-gram load filled the gaps in the central sectors on ¼ choke, unlike the lighter 27-gram loading.

Shooting with the ½ choke upped the total pellets strikes at 30 yards to 195 pellets, but only 74 inner strikes and 121 outer strikes. So, only four more #4 pellets in the inner sectors going from ¼ to ½ choke and a slight upward bias to the shot pattern, which would explain some of that.

I really like these Jocker cartridges as they offer excellent value for money for a steel shot, bio-degradable cartridge and they produced some really nice patterns. As with all steel loadings, it is crucial to check which choke is best for each cartridge. I will be trying out the Jocker clay #7.5 loads next.