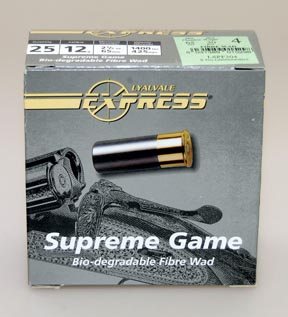 Just because game season has come to an end doesn’t mean your game cartridges need storing away. Game load has numerous uses throughout the year, pigeons are always on the cards whilst a hard hitting pheasant load will prove its worth against the ever expanding number of corvids - magpies being once again at near plague levels in my part of the country.

Already regarded as one of the best competition loads available, Express’ have continued their Supreme range over into the world of game shooting whilst their Pigeon Special have been formulated with intense woody shooting in mind. Packaged in identical grey boxes with the information panel on the lid, the Supreme Games bear a striking resemblance to their competition versions whilst the Pigeon Specials arrive in a pale yellow carton.

All 2½” 30 gram loads, both SG’s measure an exact 52mm and come complete with a 16mm deep brass head, the PS the exact same overall length but with 7mm brass. Exhibiting a tight six-point crimp, each SG comes in black plastic with gold printing, the PS translucent green plastic with black overlay. Internally, the SG contain a mean average shot charge of 29.72 grams or 242 pieces of 4’s, 28.46 grams or 261 of 5’s, 29.97 grams or 336 pieces of 6’s in the PS’s, 1.55 grams, 1.53 grams and 1.63 grams of square, even cut propellant respectively. Likewise, all three employ an over-charge card and a dense 9mm fibrewad.

Used throughout the recent game season all three of these rounds have proved their worth in a selection of shotguns. With 5’s in the right barrel, 4’s in the left, my 2½” chambered 1896 Wm Richards sidelock had a positive lease of life, the Imp Cyl and ½ restrictions working perfectly on some now seriously ex-high pheasants and fast driven partridge, the 6’s stunning on similar game and, not surprisingly, woodies.

Equally, in my Marocchi A12 semi – auto, all three 30 gram rounds producing fault free recycling as my shoot’s crow and coney population were kept under strict control. Sharp, decisive, versatile and efficient, Express’ Supreme Game exhibit all the class leading qualities of their Competition equivalents whilst the Pigeon Specials provide performance considerably in excess of their asking price, all three bestowing shotguns old and new with serious, hard hitting performance. Similarly, for those who prefer smaller shot, the SG’s are also available in 6’s, 6½’s and 7’s - so you’ve no excuse not to try these cartridges.