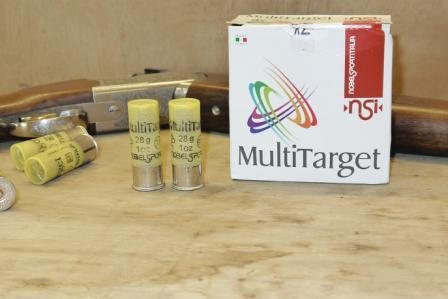 The NSI range of cartridges, imported by Edgar Brothers, seems vast. From what I have seen in their clay and quarry catalogues if you want it, they make it in one form or another! They are aimed at all points in the market primarily based on price. Having looked at one of the cheaper end clay busters, which were very good, I have now had the chance to try something from the middle point - Multitarget 28.

These are a classic 28-gram (1oz) clay load available in 7.5 or 8.5 shot sizes, the 70mm case is transparent yellow, with a 16mm nickel head and a 6-point star crimp. They are loaded with C7 powder which is a laminated single base design and a polyethylene GT plastic wad, which should improve ballistic performance, with a 4-petal shot cup. The lead is a golden colour and the quoted velocity 1328fps, all I can say on that is they were bloody quick!

In use they were comfortable to fire and not unduly noisy, I used them in a Beretta Silver pigeon with 30” barrels and my old 28” Benelli M1, both guns are half choked. Pattern testing consisted of one shot at a sheet at 30 meters with the 6X4” rectangle in the middle and the 12” circle surrounding it. As you can see there were 17-pellets in the rectangle and 39 in the circle giving a total of 56, so around 15% of shot in the circle. Distribution was fairly even, the sheet measures 23 x 16” with a total of 169-strikes on it, so around 45% coverage.

They even cycled the Benelli, something that no 28gram cartridge has been able to do to date. Secondly they were fast, to the point where I actually had to slow down my swing as I was missing in front! Not something I am used to!

I used the shells on clays and pigeons and after slowing down a tad got on very well, convincingly breaking clays that I would normally just chip.

When pigeon shooting it was like turning the clock back 20 years using clay shooting cartridges on fast and rangy birds and making a good job of it! Even a wary carrion crow succumbed to the golden lead and I do not know who was more surprised it or me.

The only thing I can really find to complain about is the wad, not the design or how it works. But would it not be better for the wider environment if plastic wads could all be at the very least photo degradable? Or better still some sort of fibre and paper cup combination to achieve the ballistic and patterning benefits of plastic whilst not littering the countryside?

Aside from my little whinge these are a great cartridge and I feel sure you will not be disappointed if you give them a go.