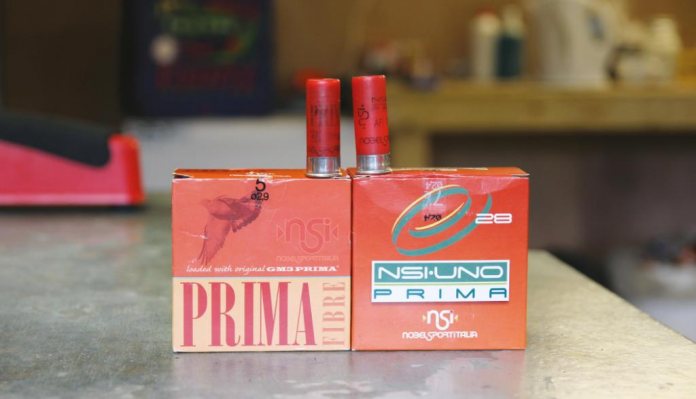 Nobel Sport Italia (NSI) is a relatively new line of shotgun cartridges. Italian shells seem to work in nearly any gun, of any calibre, for whatever they are intended! So, I had high hopes when two types of 1oz/28-gram load arrived, in #7.5 shot with a plastic wad from NSIs Prima line, which I imagine is aimed at the clay pigeon shooting market. Second, a #5 shot with a fibre wad, definitely a game load.

Both cartridges are in red plastic cases, with a distinctive 12mm nickel head, as opposed to the more typical brass colour most manufacturers use. The cases are of the ribbed type, commonly seen with a 6-star crimp for both, they are suitable for 70mm or 2 ¾” chambers, and as is the norm, they come in boxes of 25 in slabs (boxes) of 250.

I used both loads shooting pigeons and found them to be excellent, fast and hard hitting, whilst still being gentle to the shoulder, both cleanly took birds at expected distances, although the #5s, even though being pushed by a fibre wad, did seem to connect a little harder. On one of our simulated days at clay pigeon, I shot the 7.5s and was very pleased with the clays they broke and very convincingly at some longer shots.

I used three different 12 bores, my old trusty Benelli M1, which true to form would not cycle them, but I have yet to find an ounce load that does! Also, in my Beretta silver pigeon and the new Winchester SX4 semi-auto, which I have on test. I used half chokes with the M1 having a 28” tube and the Winchester and Beretta 30”.

In terms of velocity, both cartridges felt fast, I do not chronograph them, as I have found this to be misleading. As with rifle ammunition, despite quoted speeds, these always vary depending on the gun they are fired through, but along with that, the speed a shooter swings with and barrel length can have a marked difference on how fast the shooter perceives the cartridges to be.

The rectangle in the centre is 4” x 6”, with a 12” circle, I know this is not the norm for a pattern plate but I find it represents a more realistic picture of the areas we need to get pellets into to achieve a clean kill, or break a clay! Overall. I was impressed by both cartridges and being sensibly priced at around £249 per thousand I am sure you won’t be disappointed with them! Hopefully, I will get my hands on some of the 29-gram fibre wad loads, as they look the business. Fibre wads have to be the way to go if we are to act as responsible shooters and keep our beloved countryside clean and tidy!