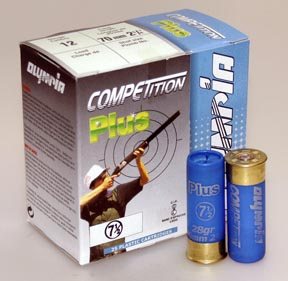 Those of us who’ve been breaking clays for over fifteen years will no doubt remember the name of Olympia Cartridges. The lesser known of the two Cypriot produced cartridges, the name rather faded away when the island’s subsidies were reduced irrespective of the fact that the two names were related. Now being re – imported by Jonathan Williams at Mid Wales SC, British shooters can once again reacquaint themselves with these loads.

Available in the full range of shot sizes and loads, the three seen here are all 2¾” 28 gram 7½ plaswad competition loads. The most popular of all the shot sizes, each of the Olympians is sufficiently different to the other to give shooters of all levels and abilities the facility to vary their choice according to the target in hand or discipline, case colour allowing for ease of selection and identification.

Delivered in distinctly individual, informative cartons the pale blue Competition Plus and bright red Minimax share physically matching and substantial 56mm cases with a 12mm brass head and a deep six-point crimp. The Gem’s case maintains the same length but comes with longer 16mm brass and a more noticeably recessed, tighter crimp. Internally, the shared componentry continues to a degree, all three sharing an identical if somewhat unusual plaswad in that the slightly shorter shot cup sits atop a diametrically opposed cushion and a deep stippled over powder cup.

The Plus and Minimax both contain an average of indistinguishable circular cut silver propellant, 1-38 grams in the former, 1-37 grams in the latter, along with 332 or 27-31 grams and 343 or 28-34 grams of high antimony shot respectively. Conversely, the Gem is powered by 1-59 grams of circular but noticeably distinctive green propellant that powers 347 or 28-20 grams of 7½’s.

Chronographed with the usual Marocchi A12 at 10 ft and patterned at 30 yards through ¼ choke mean average speeds for the Plus, Minimax and Gem were 1,187fps, 1,203fps and 1,214fps with a pattern percentage of 88%, 91% and 93%. All even and extremely well distributed, on each and every occasion it was the Gem that generated a near perfect 50:50 split over the inner and outer patterning card, the Plus and Minimax marginally biased to the outer circle.

Of the three the Gem is by far the softest and most universal, the average speed and patterning characteristics of a type to suit most shooters whilst the Minimax can make its presence felt in lighter weight guns. In respect of DTL, my recommendation would be an evenly patterning Gem in the bottom barrel with a Competition Trap in the top, whilst for ABT either in the bottom a Minimax ready and waiting for the follow-up shot. Likewise sporting, the Gem shot distribution and speed suited to all but the most distant targets, the Minimax held in reserve for long-range birds.

Well worth the effort of acquiring an initial thousand of each, once availability increases its reasonable to say all the Olympia range will start to find eager acceptance amongst those who place performance over cost. Similarly, whilst all three are well above average it’s the Gem that more than lives up to its name.