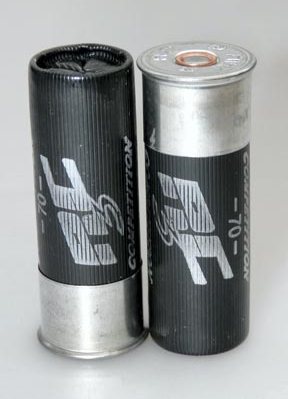 Still one of the top choices for the elite trap shooters, RC have been catering for those looking for consistent performance for years on end. If RC has a downside it’s that they aren’t cheap but they don’t build them with economy in mind. For RC, execution of purpose, decisive kills and outright victories are all that matter - a mindset shared by those who use their ammunition.

Presented in two distinctly different but overtly stylish RC branded cartons, from the shooter’s initial perspective the main difference between RC’s 2 and 3 7½ plaswads is the price, approximately £3-85p for twenty-five 2’s and £4-75p for twenty-five 3’s, as the variation not immediately obvious. The RC2 cartridges have a 57mm long thick plastic pale blue case with black overlaid printing incorporating 11mm of brass head. The RC3 cartridges are identical in length but black with silver print and a deeper 16mm silver head. Both exhibit a tight, well turned six-point crimp that opens cleanly when fired.

Internally, the RC2 employs a more conventional plaswad with a twin concertina buffer whereas the RC3 utilises a short shot cup, multi–facet cushion and a deeper over-propellant cup. Pellet wise, both contain identical, well formed, uniformed and buffed 7½ shot, an average of 341 in the RC2’s, the RC3’s more plentiful at 355. Where the main component differences occur is in the propellant.

Containing a typical 1-42 grams of green, disc cut powder, the RC2’s charge is drawn from the more conventional proprietary manufacturers, blended to RC’s own specific requirements. Conversely, this is where the RC3’s exhibit their most marked difference. Loaded with an average charge of 1-23 grams of B&P propellant, the thin, square cut metallic black flake is almost silken in appearance whilst the ultra-fast burn attributes allow for a fractionally smaller charge and hence a decrease in felt recoil.

Chronographed at ten feet through ½ choke the mean average observed speeds equated to 1,161 fps for the RC2’s, the RC3’s marginally quicker at 1,169. Likewise, patterned at the usual thirty yards through ¼ choke, the RC2 recorded 323 or a 95% pellet count, 332 or 94% for the RC3. Both cartridges displayed an extremely even pattern with a fractional central bias, a trait eagerly sought by many trap shooters. Interestingly it was the RC3 that demonstrated a slightly wider pellet distribution towards the outer edges as opposed to the tighter more significant concentration of the RC2.

Both these RC’s fit neatly into mine and other’s way of both thinking and shooting. Whilst some insist on the same load in both barrels, I’ve always been an advocate of loading up with the most appropriate cartridge for the immediate target in hand or first and second barrel DTL combination. As a first barrel load for both sporting and trap, the RC2 is one of the best I’ve used, consistent in both performance and end results. The RC3 feels different as soon as you pull the trigger; apart from the minor 8 fps speed differential, the choice of B&P propellant makes for a significant character variation. Where the RC2 feels and reacts like many other similar loads, the RC3 is noticeably smoother in detonation and discharge, these two facets noteworthy in the considerable decrease in felt recoil, an oft downside of many high performance loads, and reduced muzzle flip, providing the shooter with that fractional more gun control that could just make all the difference.

Excellent rounds, the choice as they say is yours. But for me, a combination of the two makes the most sense, both shooting wise and for reasons of economy.

Highlighting the fact that all serious shotgunners should pattern their guns and more especially their chosen ammunition, it’s the combined commonality and diversity of these two RC loads that reinforces my own argument of ‘horses for courses’ or that individual cartridge selection even if it’s the same shot size can and will enhance performance.